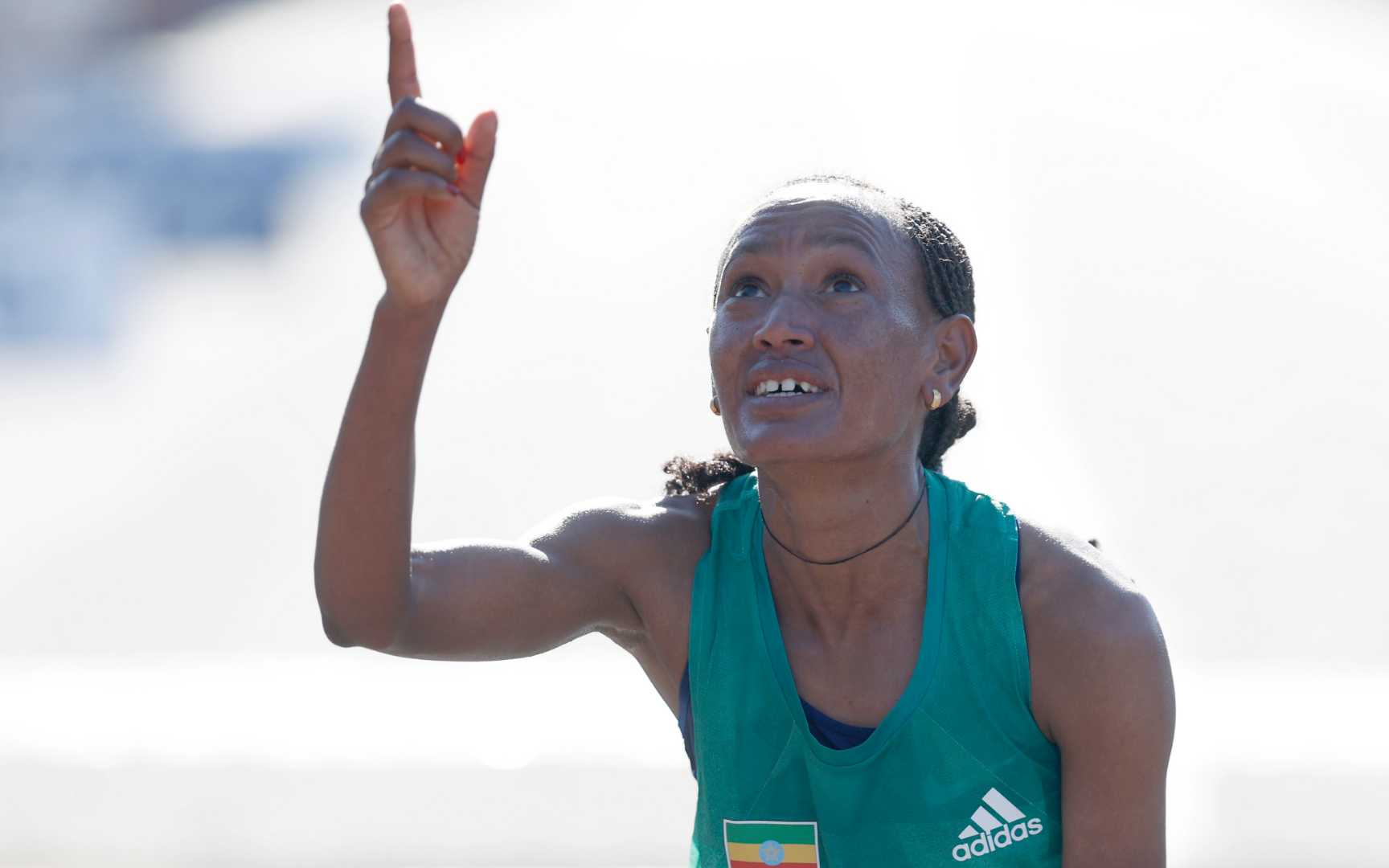 Gotytom Gebreslase was fighting back tears while speaking to AIPS after winning Ethiopia’s second Marathon gold at the on-going World Athletics Championships. She won the race with a Championship record time of 2:18:11, her first world title but the victory could have tasted a lot sweeter.

She expressed her mixed feelings towards becoming the new world champion. “I am very happy for the victory but I have a mixed feelings. I would have loved to see my parents being as joyous as the rest of Ethiopians. May God bring peace to us.” said an emotional Gebreslase, as she described how the current political situation in the her country has affected her. She has not been able to communicate with her family for over a year now.

In the women’s marathon on Monday morning at Autzen Stadium, Gebreslase surpassed the old record of 2:20:57 by Paula Radcliffe (GBR) in 2005. Her mark is the 6th fastest time in the world in 2022. Kenyan Judith Jeptum Korir registered a personal best of 2:18:20 to claim silver while Israeli Lonah Chemtai Salpeter finished third in 2:20:18. They are all 1st-time medalists in the World Championships marathon.

Gotytom had to keep her calm and follow her strategy to stay behind the Kenyan for the most part of the race, in a race where other elite title contenders such as: defending champion Ruth Chepengetich of Kenya, her compatriots Ashete Bekeri and Ababal Yeshaneh withdrew.

The new world champion started to break away from the pack and sprinted after the 40km mark, leading all the way to the finish line. “I was working on my finishing. I have to wait for her (Korir) until the last two kilometres and tell myself to change my speed. That’s how I won,” She said after the race.

The former 3000m world youth gold medallist has become a world champion after only the third marathon race she has ever run. She won her debut Marathon in Berlin in 2021 and finished third at the 2022 Tokyo marathon.

As her compatriot Tamirat Tola won the men’s marathon a day before, this is the first time Ethiopia has won in both men and women Marathon events at the world championships or the Olympic Games.

Ethiopian Marathon coach, Hadji Adelo, told AIPS that: “This victory is a result of dedication and hard work of both the coaches and the athletes. It’s also a sign of redemption for recent failures of Ethiopian athletes to win at big international tournaments like the World Championships and Olympic Games.”

On her preparation for the Championships, Gebreslase said: “I am a person with a strong character. I was physically and psychologically tested before I came here. But, I always stay positive and reminded myself that every challenge in life is a lesson and I am beyond my problems. I can tell that, I was fully prepared coming to this championships.”

The 27-year-old’s triumph earned Ethiopia its second gold medal in women’s marathon at the World Championships after Marie Dibaba’s victory in 2015.