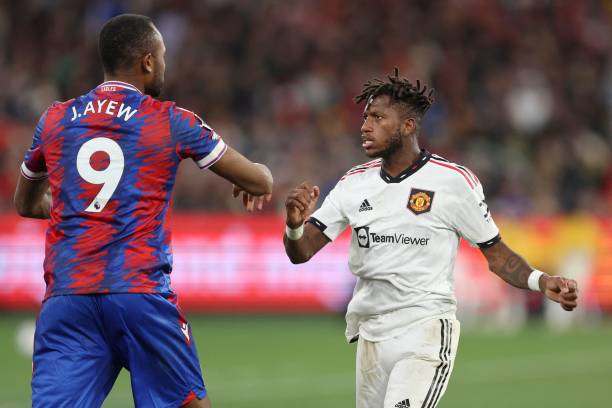 Ghana striker Jordan Ayew continued his pre-season campaign with Crystal Palace as he featured in the Eagles’ friendly loss to Manchester United on Tuesday.

Ayew played 76 minutes for Palace who were overpowered by a motivated United side at the Melbourne Cricket Ground in Australia.

Before the hour mark, Jadon Sancho raced onto a through ball from Martial to make it 3-0.

Palace pulled a goal back when Joel Ward headed through David de Gea from a near-post corner, before Fish was sent off late on for tripping Victor Akinwale.

During the game, Ayew was involved in a heated argument with Bruno Fernandes and Fred. Fernandes was enraged after Ayew lunged in on him with a very late tackle – which saw the latter shown a yellow card – and Fred leapt to his teammate’s defence. The duo shoved each other before they were eventually separated.

The 30-year-old has been impressive for Palace in their pre-season friendlies so far as they prepare for the new season. In Crystal Palace’s 5-4 win over Millwall, he scored.

He signed a contract extension with Crystal Palace in June.

“Crystal Palace is my home and I’m very happy at the football club, they have a lot of faith in me.

“You know I extended my contract and I’m very happy and I will continue the adventure there and hopefully this season will be a better one” he told Radio Gold Sports.