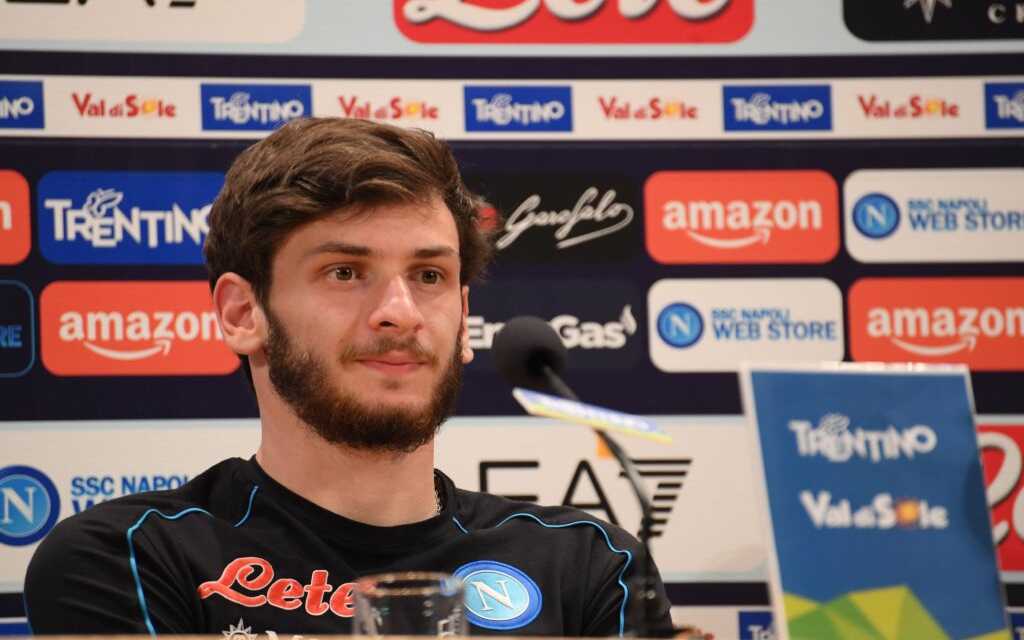 For months there were talks of the probable approach of the Georgian winger Khvicha Kvaratskhelia to team SSC Napoli.

During the invasion of the Russian army in Ukraine the 21-year-old Georgian chose to leave FC Rubin Kazan and return to his homeland and play in the Georgian football league with the shirt of Dinamo Batumi.

At the beginning of July, Aurelio De Laurentiis, the president of SSC Napoli confirmed the rumours about Khichas’s arrival in the Neapolitan football family.

From 15 July, Kvaratskhelia joined SSC Napoli and together with his future teammates, he travelled for the pre-season training session. During summer retreat in Dimaro, region of Trentino-Aldo Adige, Naples’s first team played against Anaune winning this game.

Kvara which is Kvichas’ nickname for years already is a protagonist in the first outing of the season’s game with two goals and an assist. The third goal with the Napoli shirt he scored against Perugia.

Naming the name of an unknown player in Italian football caused some confusion among fans. There are those who have remained schematic. Some hope that Kvicha will bring luck and with him Napoli sooner will win the Seria A competition.

From his personal fans he is called Kvaradona, to give him more strength and take him more responsibility.

His name and surname also caused some funny situations. For Italians, the real nightmare started with some Georgian consonants. For example, to pronounce Georgian ხ you need to write kh. Consonant like ც (ts) or ჩ (ch) and so on. In Georgia, there are consonants suitable only for the Georgian language. Those who have never had the opportunity to listen to these consonants find it difficult to pronounce them.

Some may even ask but what makes him so special? He is a left winger. He can also play on the opposite side or as a playmaker. He is good with both feet. Prefers the use of the right, especially to concentrate starting from the band. He conveys joy with the ball. He is elegant in running, like a supermodel catwalk. He has a thin physique with great acceleration and he passionately loves dribbling and feinting.

After a week of close observation, Luciano Spalletti, the Napoli coach expressed his thoughts to the prese.

“The one who manages to play both right and left side of the field with great success,” Spalletti said, “often concludes the action. He is a good footballer. We took what we kept right to replace Insigne”.

Kvicha chose number 77. As he said number seven is his favourite but 77 was the only available number. That’s how he chose to double the seven.

“Being in Naples is a great stimulus. I’m in a great team and I’m here to play and give my best” – says the Georgian winger during his presentation on journalists in Dimaro.

“When the offer from Naples arrived I decided immediately. I didn’t think twice. When I arrived they told me that the city is beautiful. I’ve never actually seen such a beautiful city and They told me the fans are great too. When you go around, everyone knows who you are. It’s nice.”

He also tells how exciting it is his transfer to the European football club for the future of Georgian football:

“Being here is a great experience for me and for my country, a stimulus also for the young Georgian players. I will give my best. Spalletti is a fantastic coach, the city is unique”.

The question about the war in Ukraine was also inevitable. The Georgian says: “Despite the fact that you asked me the political question, I left Russia because it was the right choice for my country”.

Hot summer will end with an equally hot football season awaiting us. Luciano Spalletti’s Neapolitan team will play their first match of the 2022-2023 season in Seria A on 14 August against Verona away from home:

“I made the right decision, I enjoy my days here,” says Kvara. “Time will show how this adventure goes. I’ve only been here for a few days, we’ll see how to settle down.”