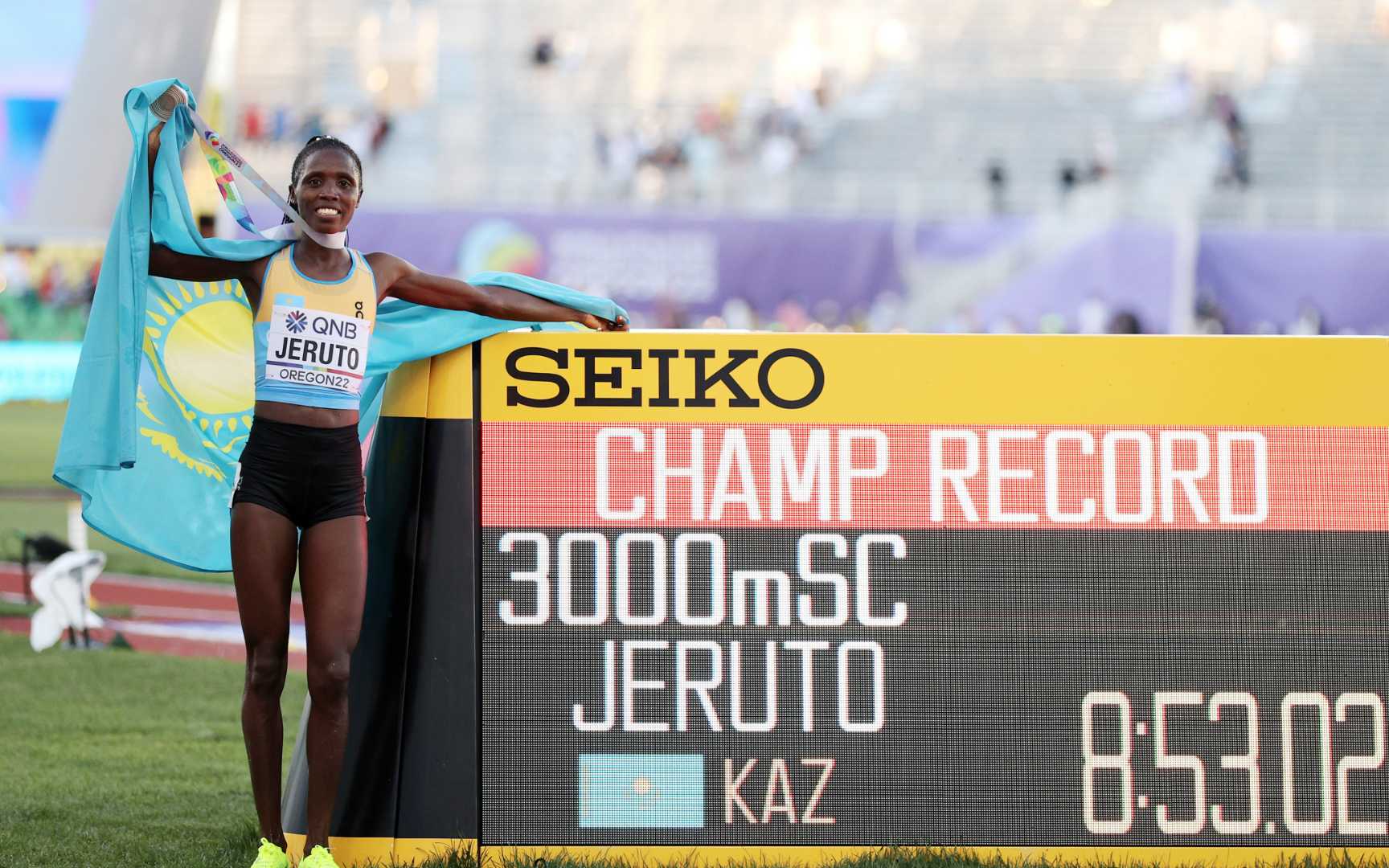 Kenyan-born Norah Jeruto began representing Kazakhstan six months ago on 30 January. She has now claimed the country’s first ever world title at Oregon22, running a championship record time of 8:53.02 to win the women’s steeple chase final. It was a race she dominated for the most path, losing her lead for only a very short period in the early stages, but there was no context in the final stretch as she crossed the finish line leaving the rest of the field in her wake.

“At the starting line, I was afraid of my friends from Ethiopia,” Jeruto admitted. “They are also champions like me so I was scared of them. I tried my best to win the race and it was not easy, it was tough. Next race, I will meet my opponents in Monaco and we will fight again. I decided to be in the front because I felt my fellow athletes and I like to control the race and to be in the front to make sure I can fight for medals.”

And she made sure she got the gold medal with the third-fastest in the history of the women’s 3000m steeplechase, consolidating on her personal best of 8:53.65 which she also clocked at Hayward Field last year and which helped her crack into the top three in the world all-time list for the first time.

Ethiopians celebrated silver and bronze in tonight’s race with Werkuha Getachew and Mekides Abebe recording an national record (8:54.61) and personal best (8:56.08) respectively. It was the first women’s 3000m steeplechase race in history where the top three all dipped under nine minutes.  Getachew and Abebe are now in fourth and fifth respectively behind Jeruto on the world all-time list.

Jeruto had a great idea on how to celebrate it. She took a plunge into the steeplechase water pit and was joined by her fellow medallists. Even Oregon22 mascot, Legend the Bigfoot did not miss out on the pool party.

In line with the World Athletics Eligibility to Represent a Member Rule 1.4.2, the 26-year-old Jeruto, who got her Kazakhstani passport in 2018 had to observe a waiting period of three years for her switch from Kenya to be finalized, missing last year’s Olympic Games in Tokyo as a result, even though she was the world’s fastest steepler that year and has maintained that form this year.

She has now upgraded her world U18 title which she won in the 2000m steeplechase in 2011 and she is looking forward to winning more titles for Kazakhstan. Jeruto’s sister Daisy Jepkemei, 2012 world U20 champion, also represented Kazakhstan in the steeplechase event, running 9:23.07 to finish sixth in her heat.

“I have to say thank you to my father and mother, thank you to my coach and opponents and my manager and my sister. She missed to qualify to the final but I want to tell her, that she is the next champion. I also want to thank this country for welcoming us here. The weather was good here. I enjoyed my race today.”

When asked why she decided to run for Kazakhstan, she began by saying “so you know in Kenya we are many” and then there was a short pause before she added “I don’t know how to say it”.