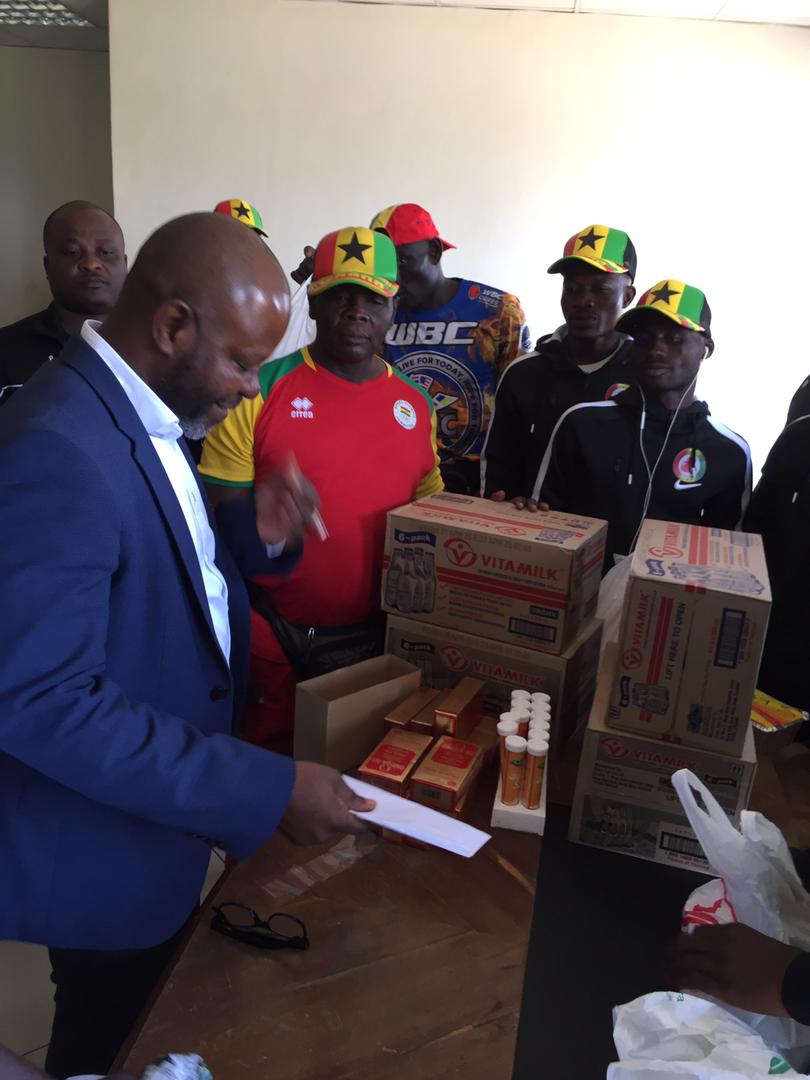 Alhaji Abdulai Issaka Pangasur, executive member of the Ghana Boxing Federation (GBF), overseers of the national boxing team, Black Bombers on Wednesday charged the nine fighters representing the country at the 2022 Commonwealth Games to all return with medals at the end of the event in the UK.

The Black Bombers have been training since a number were selected after the national individual championship earlier this year and with few days before the selected team’s departure alongside Team Ghana to the July 28-August 4 competition in Birmingham, Alhaji Pangasur, CEO of leading freight forwarding company, Freight Consult said it was the perfect time to visit them in camp to bid them farewell.

He did not show up empty-handed though as Mr. Pangasur used the occasion to also donate some health and food items as well as a cash of five thousand Ghana Cedis (Gh¢5,000) to the team as his own motivation as he charged them to bring home gold medals.

“They should listen to their coaches and make sure all they are taught they put into action. Boxing requires a lot of discipline and they have already been told the only two words in boxing, hardwork and dedication,” Alhaji Pangasur told the Black Bombers.

“I wish them well and I hope that by the time they return, the media will be awash with news of a lot of gold for Ghana. I want every division to come back with gold,” the GBF executive member charged.

“We say our heartfelt appreciation to you, you have touched our hearts and we appreciate what you have done for us. We also thank the GBF in general for everything they have been doing for us and we hope this will continue,” Coach Asare expressed.

Also gratified was newly appointed captain of the team, Abubakar Kwasi Quartey who pledged that contribution by the Freight Consult CEO will definitely bring yields.

“On behalf of the boxers, I will like to say a very big thank you for what you have done, we are very grateful. These kind of things motivates us so much and we are promising you that it will never be in vain. Good results are really going to come out of it,” Captain Quartey affirmed.

However the biggest words of appreciation to Alhaji Pangasur were reserved for GBF President, Bernard Quartey who revealed to the boxers the huge contributions the amateur boxing administration have received from the executive board member since assuming office at the end of last year.

“I am very happy to see our able executive member Mr. Abdulai who has been helping the federation financially for so long,” the GBF chief began.

“You can recall during our individual championship, the outfit of the referees and judges changed totally. If I tell you today that he’s the one that provided the finances,” Mr. Quartey revealed.

“There several supports that he has provided and even today when I told him the boxers may leave anytime, he said no matter what it takes he will be here to provide what you are witnessing. So I will say Mr. Abdulai and his company, Freight Consult have been very good to us, we are not going to forget what he has done here today,” he stated.