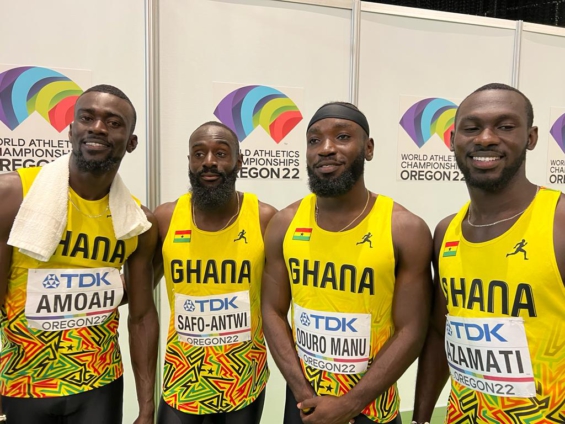 Ghana’s 4×100 relay team will take to the track in the country’s final act on the tracks at the ongoing World Athletics Championships in Oregon.

With failed attempts in the 100m, 200m and 800m races, the 4×100 event presents an opportunity for Team Ghana to give themselves a chance of winning a medal at the championships.

Ghana will run Heat 1 alongside the USA, England, Japan, and the Netherlands, with the race scheduled for 1.05am GMT.

The team will4 be running together for just the fifth time at a major competition and will look to make the 4th final in three years.

Two key members of the quartet in Joseph Paul Amoah and Benjamin Azamati almost underlined their sub 10 status after recording season bests of 9.94s and 9.90s – their movement in training has only confirmed that and are eager to make amends after crashing out of 100m and 200m events early.

The entire team has been running faster this season and suggests there’s more success on the horizon –Sean Safo Antwi has run a season-best of 10.28s – that was bettered by Joseph Manu’s 10.12s and Emmanuel Yeboah also run a season’s best of 10.20s – Manu and Yeboah are hoping to cause an upset in Eugen on Saturday.

Winning gold at the Africa games in Rabat – making the 2019 World relay final and the 2020 Olympics final is enough experience to upset the cards at the Hayward field when the gun goes.