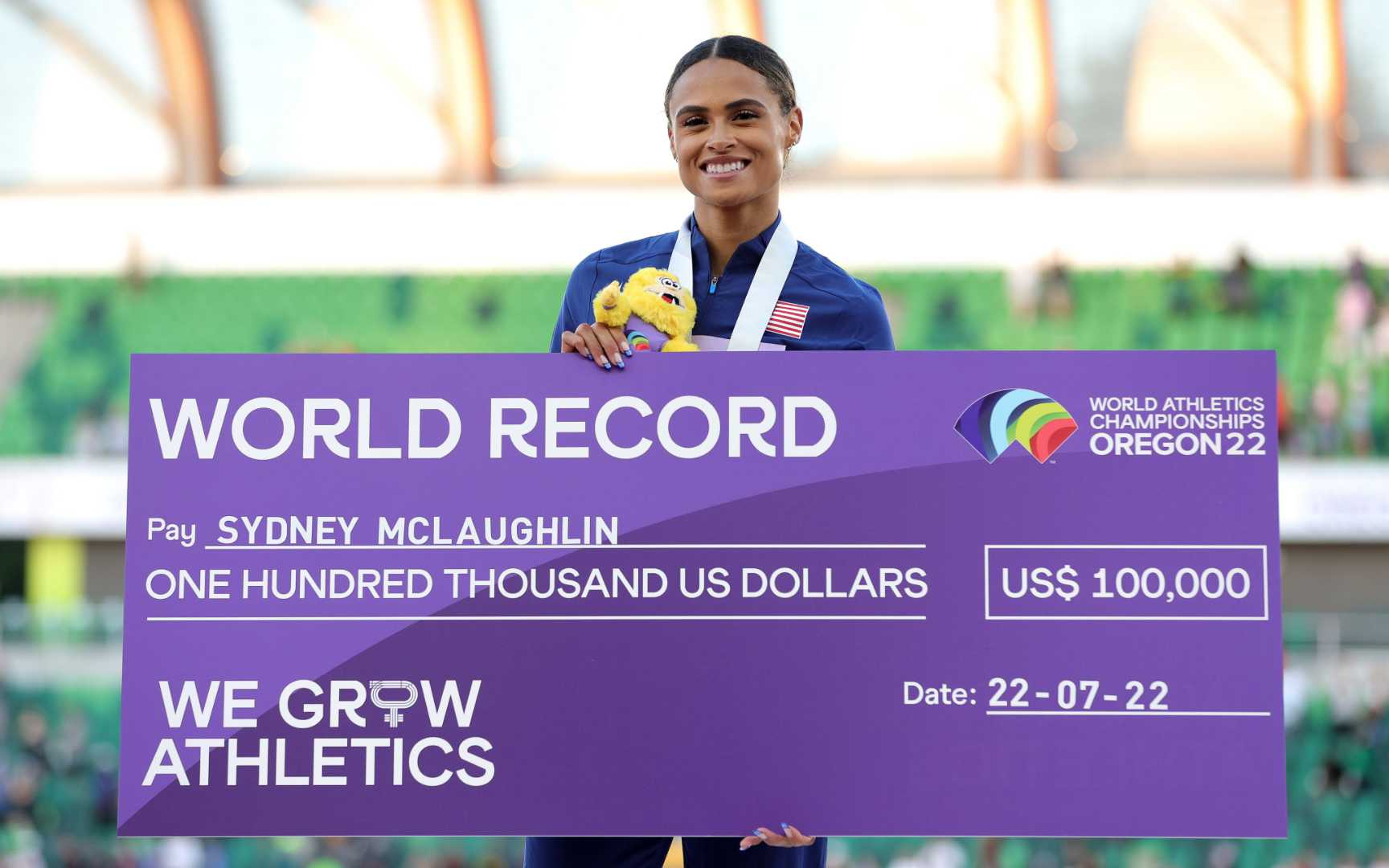 Gold medalist Sydney McLaughlin of Team United States poses with a check for setting a new world record during the medal ceremony for the Women’s 400m Hurdles Final of Oregon22 at Hayward Field on July 22. (Photo by Carmen Mandato/Getty Images)a

Hayward Field exploded after McLaughlin crossed the finish line during the women 400m hurdles final on Friday night. For sure it was one of the best evening of the maiden World Championships in the USA. The stadium clock read 50.68s, a new world record. It was as though McLaughin ran on a flat track without any hurdles. She received a cheque of 100,000 USD for her world record feat.

“I think I always had an awesome relationship with Hayward Field, you know. Every time I come here I just feel like I run really great races. So to have been able to have a world title here in the USA is really special already,” Sydney said.

Only a few weeks ago in the same place, McLaughlin at the US trials broke her own world record from Tokyo 2020. Since last June, she has brought the world record down from 52.16 to 50.68.

“I’m just taking in the moment. So many times the race goes by and you forget what happened…”

She became the second-youngest track and field athlete in history to own the three biggest accolades in an individual event — Olympic gold, a world title, and a world record. Only Ethiopian distance runner Kenenisa Bekele held all three at a younger age.

Femke Bol got a silver in her first World Championships final, the first medal for her country, the Netherlands in Oregon with a time of 52.27, equaling her 2022 season’s best.

“I think it was amazing, I mean, you can see that crowd. Of course, people are excited about the USA’s competitors, which I understand, but I just took this atmosphere from the crowd, to also run as fast as I possibly could and I think it’s an amazing crowd. And they were so truly happy for me with my silver medal,” Femke told.

Gold medalist Sydney McLaughlin of Team United States poses with a check for setting a new world record during the medal ceremony for the Women’s 400m Hurdles Final of Oregon22 at Hayward Field on July 22. (Photo by Carmen Mandato/Getty Images)

Dalilah Muhammad couldn’t defend her world title as she finished 3rd with a time of 53.13. It is the best ever 3rd place at the World Championships.

“I definitely thought fifty is possible. After that race I think that 49 is possible,” she said.

McLaughlin destroyed her own world record by 0.73 seconds. It is the second best improvement ever in the event. It is the fourth time in the last 13 months that Sydney beat the 400m hurdles world record. What a summer McLaughlin had. Marriage with Andre Levrone, world records, and first world title.

“I was aware of the crowd in the stadium. But I was more aware of the lactic acid in my legs. But the crowd definitely helped me to be faster. Just putting everything which you have done in practice, into the race. You just let your body do it. I mean, I don’t overthink, I’m just releasing the talents that God has given me. And I think it was the best race I have ever run,” Sydney explained

She has a pre-race mantra. It sounds like ‘God’s got you’. She starts with it onto the track and has a charge.

Besides this one, McLaughlin has many lucky rituals before the race. For example, her famous lucky Minions blanket, which she has had since she was 14.  Also, Sydney always wears a twist in her hair when competing.

“I definitely have my blanket for sure. But I think the biggest thing was that I had fans and family here. After Tokyo, where we had nobody, this was really huge help for me in the USA, where my whole family can be there,” – said Sydney after the final with the twist in her hair. It seems these two rituals were enough for such a huge result.

She won her first race at the age of six and since then she has continued to do it again and again. No surprise, she comes from a family of track stars. Her brother, Taylor, is a hurdler and her father, Willie, ran in the 1984 Olympic trials when he made it to the semi-finals.

It is possible that in the future we will have a chance to cheer for McLaughlin in 400m or the 200m.