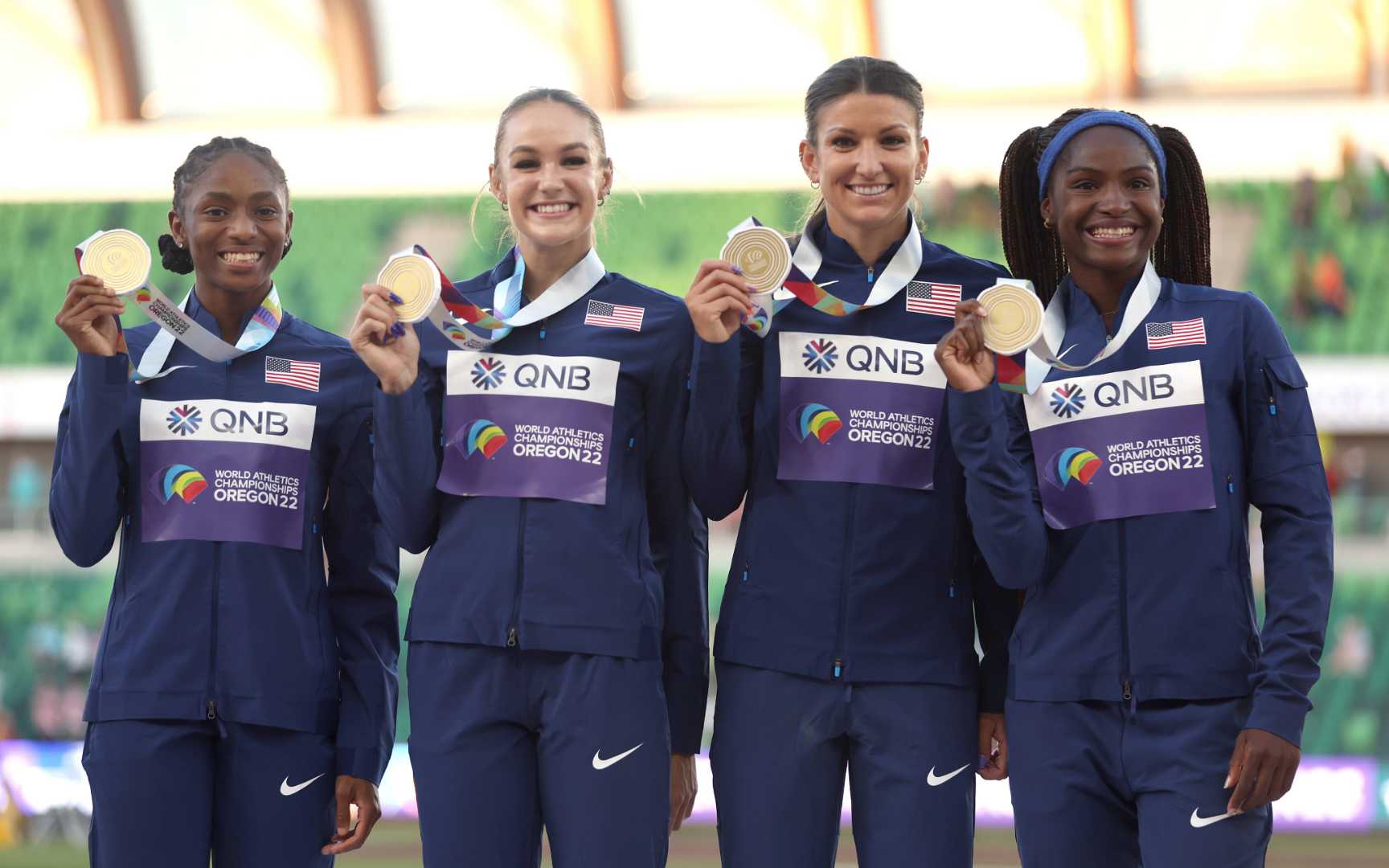 The US a world leading time of 41.14s to upset Olympic champions Jamaica (41.18s) and win the women’s 4x100m relay by 0.04s in front of their home crowd – the 2nd fastest time at a World Championships. Germany (42.03s) claimed a suprising bronze medal while Great Britain & NI Team finished sixth.

The United States brought in Abby Steiner to join Melissa Jefferson, Jenna Prandini and Twanisha Terry for the final at Hayward Field. When Terry crossed the finish line ahead of Jamaica, the crowd erupted and the 22-year-old Abby Steiner began to scream. “Yeah, I think you can hear it on my cracked voice,” she explained exlusively to AIPS. “I dont think I haver ever screamed like that in a relay. I screamed when Titi was running at the back. It was just so much emotion. It was just so much fun, so much energy. After this long season with 58 races, Steiner is just happy to have a happy ending at her world championships debut following her fifth-place result in the 200m. “After that long season I will just look up for a re-live. I love relays, they give me so much energy,” she said. In addition: no party for her tonight, because she needs to get up at 4am, but “maybe tomorrow”, she explained with a big smile. The United States defended its world title and won its 8th gold medal and 13th medal in the event. The eight gold medals lead the medal list, meanwhile Jamaica won its 16th medal in the event.

Fraser-Pryce: “Dont think that any medals are designated just for Jamaica”

Jamaica brought in their “big three” – Shericka Jackson, Shelly-Ann Fraser-Pryce and Elaine Thompson-Herah – with lead runner Kemba Nelson the only survivor from the semi-final team, but they struggled on their changeovers. 100m winner and 200m silver medallist Shelly-Ann Fraser-Pryce explained, that their second place is a success: “I dont think that any medals are designated just for Jamaica. We have to work like anybody else. Tonight I think, we had sum mess ups in the legs. We came up with a silver medal, it could have been worse, but it wasn’t and we are glad. We continue to have these experiences, and hopefully one day we will get it right.”

Kemba Nelson – Hayward Field was her home for two years

While Fraser-Pryce enjoyed the full attention of the journalists in the mixed zone, first starter Kemba Nelson just stood right next to hear, feeling a bit shy. The 22-year-old is a graduate of the University of Oregon and failed to make it to the final of the women’s 100m. Now she joined forces with the three fastest women on this planet. Nelson, who has a personal best time of 10.88, won silver in the 100m at the NCAA Division One Championships last month. She then finished second in the women’s 100m at the National Junior and Senior Championships to secure a spot on Jamaica’s team to these World Championships, her first participation. “This morning I found out, that I am the first,” Nelson said and continued: “My family back home and my community, my country, my schoolmates, the Ducks, there were behind me this entire time. I am really grateful for this support and it means a lot going out to hear the horns of Jamaica and also people saying ‘go ducks’, it means a lot.”

They cheered, laid in each other’s arms, shed tears of happiness and took selfies: Tatjana Pinto, Alexandra Burghardt, Gina Lückenkemper and Rebekka Haase celebrated their bronze medal after a strong performance in 42.03 seconds. “I just screamed at Gina to run fast and she did and I was just watching until the end. Then I was just speechless seeing the result on the screen,”said the 28 years old Alexandra Burghardt. And Rebekka Haase (29) added: “I definitly felt ready to take the responsibility for the whole team and I knew we all have to do a good job. We waited for this result like seven years as a team. Germany’s 5th overall world championship medal in this event, after gold in 2001, and bronze in 1991, 1995, and 2009.“The medal is a sensation. The men would have actually been expected to do this. This is the jolt we needed,” said DLV President Jürgen Kessing. The changes were perfect, but the German relay team also benefited from a stumble of Dina Asher-Smith from Great Britain in the turn.

Nigeria women’s 4x100m relay team, who run in lane 8, finished fourth with an African Record of 42.22 just inches away from the bronze medal. The quartet of Joy Udo-Gabriel, Favour Ofili, Rosemary Chukwuma and Grace Nwokocha had brought Nigeria to its first 4x100m final in 11 years. Athletics enthusiasts are convinced that the Nigerian team can race to the podium if they perfect their baton exchange. Britain was in the medal hunt until third leg Dina Asher-Smith pulled up injured.