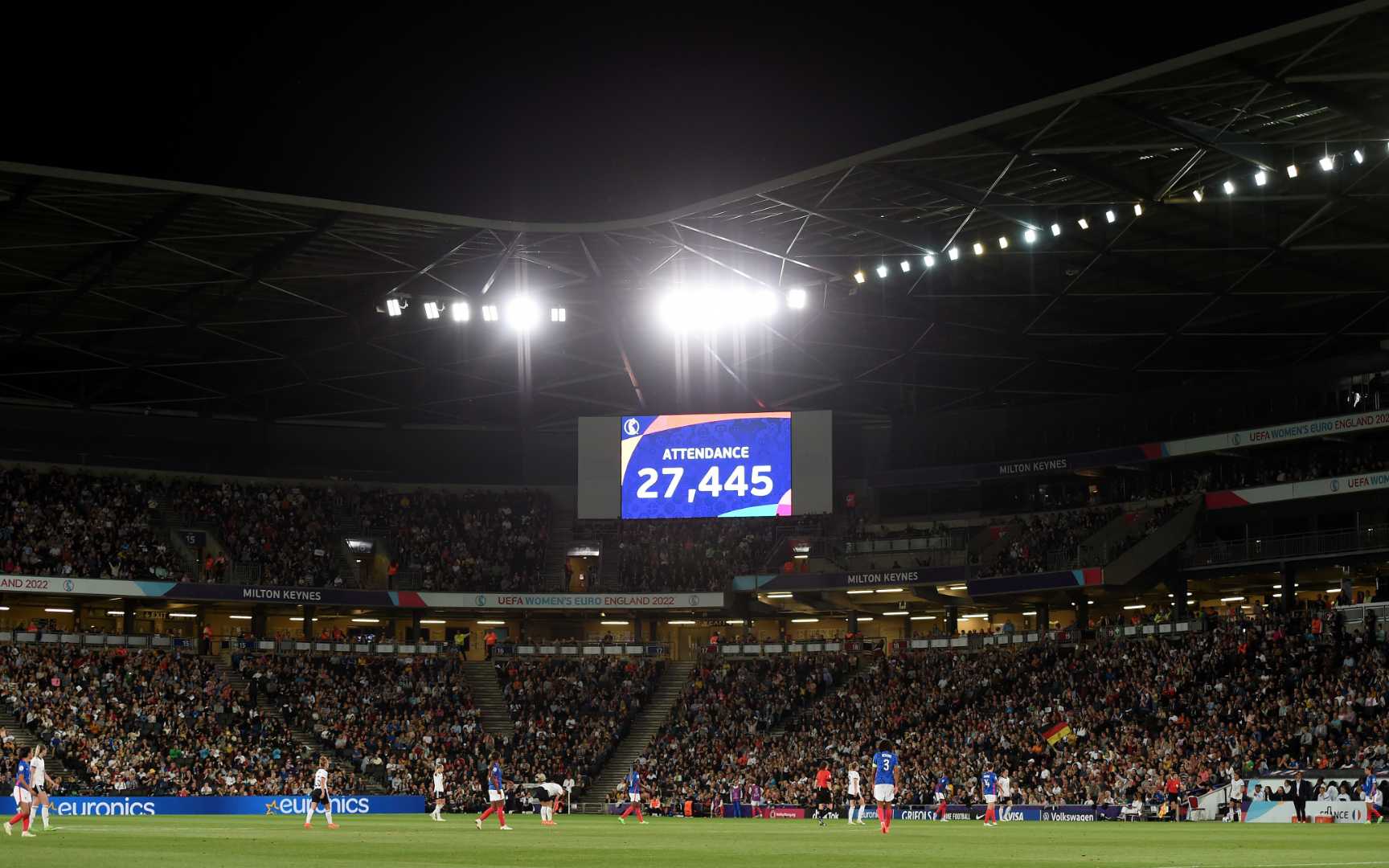 A general view as the LED Screen on the inside of Stadium MK displays the match attendance of 27,445 during the UEFA Women’s Euro 2022 Semi Final match between Germany and France at Stadium MK on July 27, 2022. (Photo by Harriet Lander/Getty Images)
UEFA

Nearly 100,000 children have been part of that record-breaking attendance while 47% of all fans in the stadiums have been female, with a similar fan demographic anticipated for the final. Tens of thousands of international fans have travelled to England, bringing a festive atmosphere to the nine host cities.

The tournament has been marked by crowds enjoying this family-friendly atmosphere, and the same buzz and excitement can be expected for the final between England and Germany on Sunday, which is set to establish another major benchmark.

Whoever comes out on top, England against Germany at the iconic Wembley Stadium will be one for the history books and an unforgettable event for a whole generation. For all the lucky ones who have a ticket for the final, we are looking forward to seeing you at Wembley, breaking another attendance record and supporting your team!

Ticket holders arriving early can soak in the atmosphere at the Fan Party at Arena Square next to Wembley Stadium, which will open at 11:00 and be free to enter for those with a valid match ticket. There will be drinks and food of various cuisines on offer as well as live entertainment in the build-up to the match.

Ticket holders are advised to arrive at the stadium early to assist with enhanced security protocols and should only travel to the stadium with a valid ticket for the final.

Wembley Park is operating a ‘No Street Drinking Zone’ on Olympic Way and the surrounding area, supported by Brent Council, the Metropolitan Police and partners. For stadium information and policies, including details about the restricted bag policy and prohibited items list, visit here.

The UEFA ticketing portal was the only official platform to buy tickets and fans are strongly advised not to purchase tickets on the secondary market. For supporters without tickets, there are plenty of options to watch the game and join in the unique atmosphere of the tournament throughout the host country, either with friends and family from home – the match will be screened free-to-air on BBC One in England – or in pubs and bars.

BRIT Award-winning singer-songwriter Becky Hill will headline the UEFA Women’s EURO 2022 Final Show presented by Pepsi MAX. This will be the first time a live music production of this scale has taken place at the UEFA Women’s EURO final. Fans can expect a high-energy show-stopper from the Remember hitmaker that will celebrate female strength, power and achievement, both on and off the pitch.

• Highest attendance at a Women’s EURO quarter-final match not involving the hosts: 16,025 at Germany 2-0 Austria (Brentford)