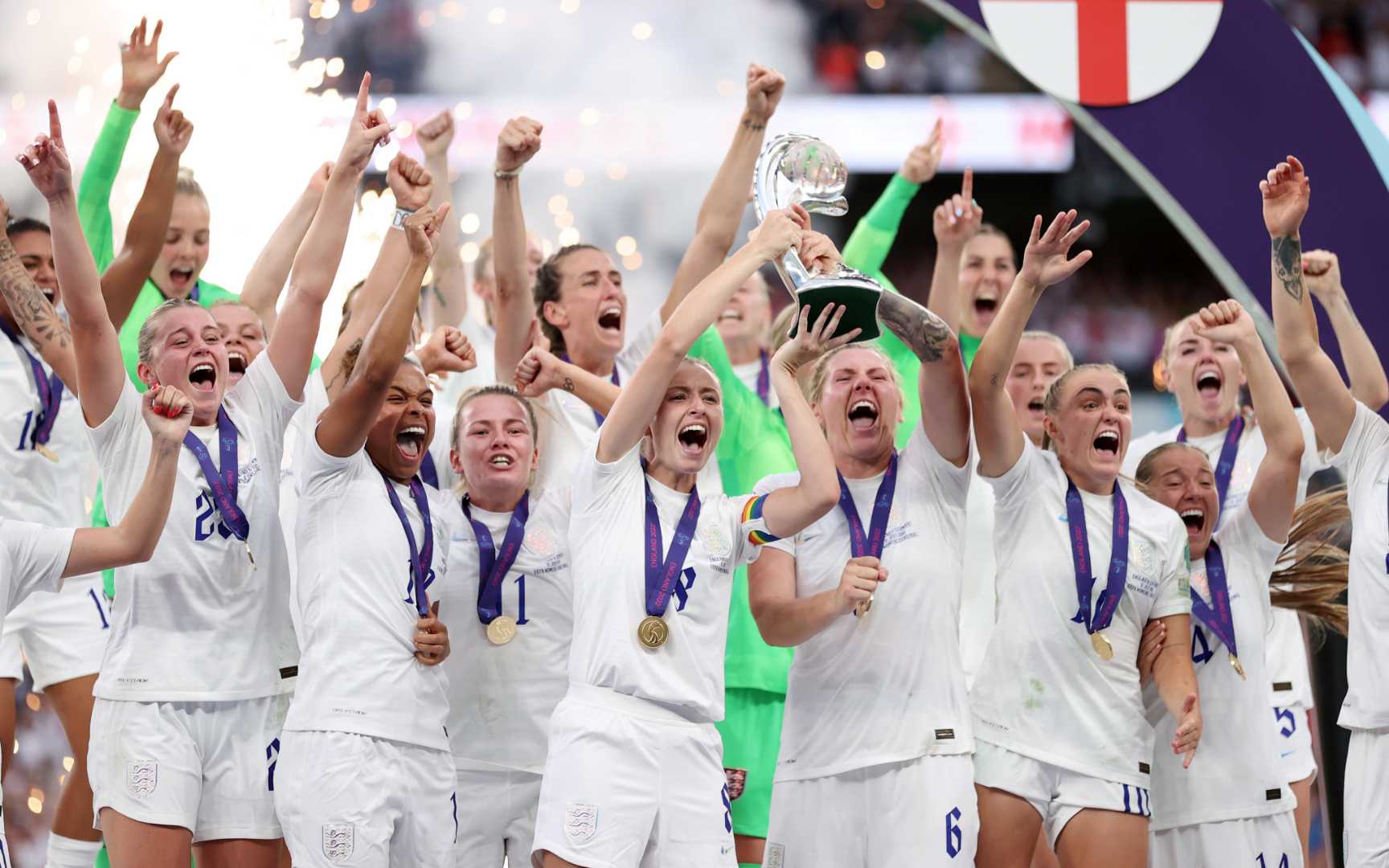 – One year after England’s men fell a penalty kick short in their European Championship final the women brought it home in achieving their own Wembley triumph by defeating Germany 2-1 after extra time.

PERFECTLY TIMED GOAL Match-winner was Chloe Kelly in the second half of extra time whose first goal in international football could not have been timed more perfectly. Earlier England had grabbed the lead midway through the second half through substitute Elle Toone only to be taken to the extra halfhour by an equaliser by Lina Magull.

England’s players danced their way through the celebrations. The evening was theirs but, beyond that, an even greater winner was the overall cause of women’s football.

FIRST MAJOR SINCE 1966 Coach Sarina Wiegman thus repeated with England the title-winning triumph she had managed with her own host nation Netherlands five years ago. This was an England national team’s first major prize since the men won the World Cup in 1966 – also against German opposition and also in extra time.

RECORD CROWD ATTENDANCE Germany had taken to the pitch in front of a Euro record 87,192 attendance determined to regain the European crown they had ceded five years earlier in Netherlands. They had won it eight times, including in 2009 when they despatched England 6-2 on the only previous occasion the Lionesses had reached the final.

FIESTY COLLISION They were the better team for several passages in a feisty collision between the two most outstanding teams in a tournament which set all sorts of attendance and television viewing figures. In the end, however, they will regret the warm-up injury which cost them the services of their top-scoring centre-forward Alex Popp.

Outstanding above all in a hard-working England team were goalkeeper Mary Earps and midfielder Keira Walsh.

UNDEFEATED WIEGMAN Wiegman, undefeated in 20 games in charge including 18 wins, said: “What we’ve done is really incredible. I’m so proud of the team.

“It was so tight but who cares? We won 2-1 and we are European champions. If you really want to win and become better every single day, that’s what I have noticed the whole year. It’s been incredible. We agreed a couple of things on behaviours, they weren’t just words, we lived it – and this is the result.”

UNHAPPY VOSS-TECKLENBURG Germany coach Martina Voss-Tecklenburg was unhappy with an early failure of VAR to award her team a penalty.

In the 26th minute the ball ricocheted off the arm of England captain Leah Williamson’s but referee Kateryna Monzul waved play on. VAR Paolo Valeri checked the incident but allowed the game to continue.

Voss-Tecklenburg said: “It was a handball, you have to see that.” However she refused to blame defeat on this one incident.

She said: “England deserved the win after such a strong tournament. We can be proud of what we’ve achieved, even if it wasn’t quite enough.”

Top scorers: Mead and Alex Popp (Ger) each six goals but Mead was awarded the Golden Boot for a 5-0 advantage in tournament assists.