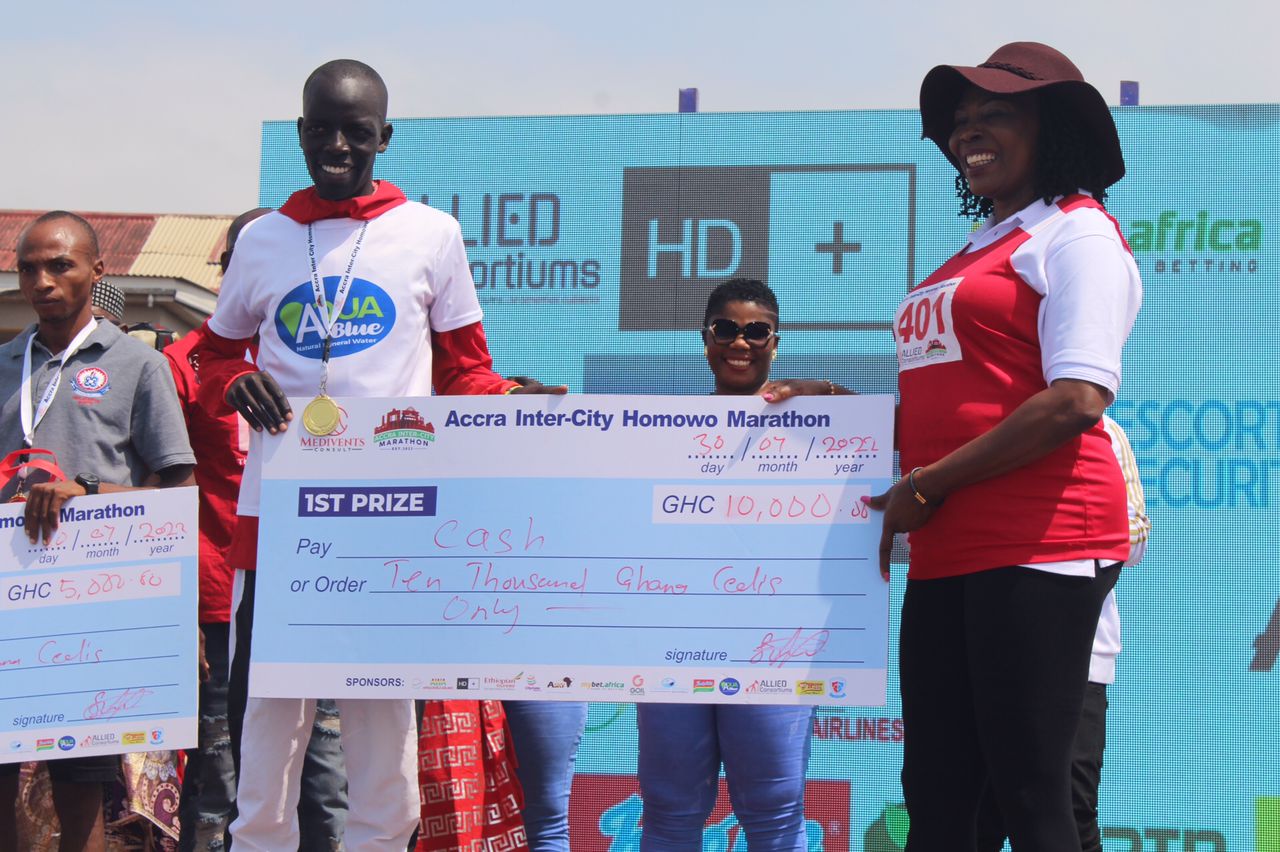 Martin Tirop Kimurgor of Kenya emerged tops Saturday as the first ever Accra Inter-city Marathon shook the Ghanaian capital, whilst young Sakat Lariba preserved some Ghanaian pride by clinching the women’s crown in a 21-kilometer race held in unison with the annual Ga Homowo festival of the people of Accra.

Kimurgor flanked by the two runners-up during the medal ceremony.

Spanning a distance from Spintex Road (Papaye) to Mantse Agboona in the James Town heartbeat of the Ga State, the race saw over 600 competitors all vying for honours in the event which kicked off the 2022 Homowo celebrations, a traditional festival marking the beginning of food harvest.

In the end, Kenya’s Kimurgor topped them all, finishing in a time of as he ran home with the mouthwatering ten thousand Ghana Cedis (Gh¢10,000) and souvenirs from sponsors of the one-day event.

Some of the athletes during the 21-kilometre race

“I trained hard for this event, and thankfully I won. I am ready to participate in any other marathon in the future,” a joyous Kimurgor said.

Mayor of Accra, Mrs. Elizabeth Sackey praised the organisers for the great initiative and pledged the commitment to make it an annual part of the Homowo festival aside its tourism, economic and sporting benefits.

“This has been a very refreshing exercise for our city and from now on I can tell you it will become an annual event with even much more patronage. There were athletes here from other countries and it was won by a Kenyan which says a lot about its international status,” Mrs. Sackey said in her closing remarks.

“I am also very happy a Ghanaian won the women’s competition which shows that we also have runners who can compete at international level. We expect participation from more countries and more athletes next year, this can only get bigger and better. Even petty traders can make a lot of money because of the huge numbers that will take part in future. Its a win-win for everybody,” she noted.

Meanwhile, the Medivents Consult organisers have hailed the success of this maiden race which saw participants not just from Ghana and Kenya but also Togo, Nigeria and China.

“When we keep promoting this event, we would help develop many talents for Ghana and Africa. I encourage the youth of Ghana and Africa to take to sports because it promotes development, promotes tourism, and engenders peaceful coexistence,” said Henry Senyo Penni, General Manager of Medivents Consult.