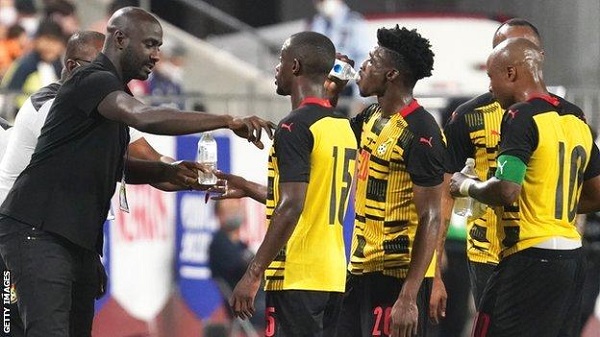 Ghana coach, Otto Addo, admits it has not been easy to convince dual-nationality players to commit to playing for Ghana. Ahead of the 2022 World Cup in Qatar, the Ghana Football Association (GFA) has been looking to bolster the ranks of the Black Stars.

So far, Brighton’s wing-back, Tariq Lamptey, and Athletic Bilbao forward, Inaki Williams, who have represented England and Spain, respectively, are among five players who switched allegiance to Ghana earlier this month.

“Since March, we’ve been talking with a lot of players who we think can impact the team,” Addo, 42, told the BBC World Football podcast.”It’s a difficult decision, especially if you were born in another country, and you’re young and have a choice to play for two nations because once you’ve played more than three matches, you can’t change again.

“And this is not like the club stage where you can sign maybe for one to three years. And then after that, if things don’t work, you can go to another club.”It’s a lifetime decision,” he explained.

As well as Lamptey and Williams, three German-born players – Stephen Ambrosius, Ransford-Yeboah Konigsdorffer and Patric Pfeiffer – have also declared for the Black Stars. Williams won one cap for Spain in 2016, while Lamptey, Ambrosius, and Konigsdorffer have all been capped at Under-21 level by the countries of their birth.

Addo took charge of Ghana after their group-stage exit from the Africa Cup of Nations in January, and led the side to World Cup qualification for the first time since 2014 after beating fierce rivals Nigeria on the away goals rule. He has since extended his contract until the end of December, and will, therefore, lead the 2010 World Cup quarter-finalists against Portugal, South Korea and Uruguay in Group H at this year’s finals in Qatar in November.

With only two international fixtures scheduled before the tournament, time is of the essence to integrate new players. Being born in Germany to Ghanaian parents and opting for Ghana before winning 15 caps between 1999 and 2006, Addo speaks from the experience of having a choice of national sides.

– “Being born in Germany, maybe I can even understand more of that thinking,” the former Hamburg and Dortmund midfielder added. “We want those who decided to play for Ghana to get familiar with the team and the staff. So, everybody who wants to join has to join now, and they know exactly what they’re going to do.”
Addo, who combines the Ghana job with his role as talent development trainer at Borussia Dortmund, explained.

The decision by GFA to bolster the national team through diaspora players has, however, met some backlash from followers of the Black Stars. Wary fans are worried that this trend – snapping up eligible players of Ghanaian heritage – might disturb the harmony of the squad as the newcomers are seen as opportunists who just want a chance to play in the World Cup.

The prime example for Ghana is Germany-born Kevin-Prince Boateng, who played at the 2010 and 2014 World Cups, but rarely showed up for fixtures in far-flung corners of the continent and never appeared at the Africa Cup of Nations. However, Addo believes new players know what to expect when they commit to the four-time African champions.

“This is why they really have to think about what to do. Especially if you’re not born in this environment, it’s not always easy,” he said.

“But they know what they stand to get. And first of all, it’s a lot of joy and love.

“And surely also for them. It’s not only about the World Cup, but also about more World Cups to come. It’s about African Cup of Nations. It’s about winning, being successful. So, it’s not about just this one World Cup in Qatar.

“In addition to those members of the Diaspora, Kumasi-born Southampton defender, Mohammed Salisu, has also made himself available for selection after previously turning down call-ups from Ghana.”