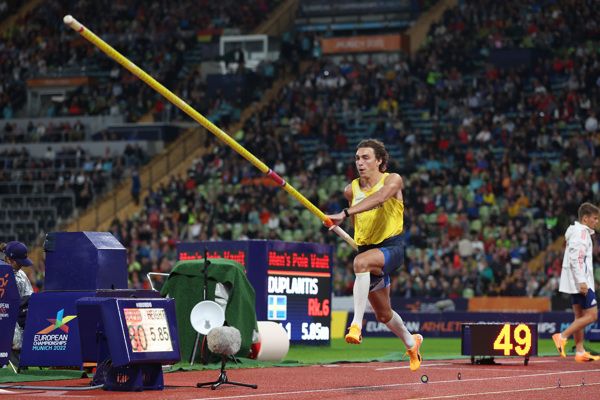 Three first-time clearances – at 5.65m, 5.85m and 5.90m – were enough for world and Olympic pole vault champion Mondo Duplantis to retain his European title in Munich on Saturday (20).

That only left the question of how high to try to jump before he concluded his efforts, and the 22-year-old Swede selected 6.06m, one centimetre higher than the championship record he set in Berlin in 2018, clearing it – of course – first time.

While the rain had abated, the wind was still gusting, as evidenced by the flags that fluttered constantly on the rim of the stadium, making conditions difficult for all competitors.

Other than Duplantis, the man who managed best was 23-year-old home vaulter Bo Kanda Lita Baehre, fourth at the 2019 World Championships, who earned silver with a best of 5.85m.

Bronze went to Norway’s Paul Lillefosse on countback from Rutger Koppelaar of the Netherlands, France’s Thibaut Collet and second Norwegian Sondre Guttormsen, with all clearing 5.65m.

There was a second championship record in the concluding women’s 3000m steeplechase on the penultimate day of this event when Albania’s Luiza Gega finished in 9:11.31, chased home by Germany’s Lea Meyer in a personal best of 9:15.35 and Britain’s Elizabeth Bird, who earned bronze in 9:23.18.

Not only did Gega break the championship record, she also achieved Albania’s first outdoor European title.

The women’s 4x400m saw Femke Bol, who completed a unique 400m/400m hurdles double last night, adding a third gold as she anchored the Dutch team to gold in 3:20.87, the fastest time run in Europe this season and moving them from 18th to eighth on the European all-time list.

Bol engaged in a huge struggle around the final bend with Natalia Kaczmarek of Poland and Britain’s Nicole Yeargin before establishing clear dominance over the final 50 metres, with the Poles taking silver in 3:21.68 and Britain earning bronze in 3:21.74 from fourth-placed Belgium, who set a national record of 3:22.12.

After the early-evening thunderstorm, a huge rainbow emerged here shortly before the women’s 800m got under way, fading away once the race was over. By which point Britain’s Keely Hodgkinson, silver medallist at last year’s Olympics and this year’s World Championships and Commonwealth Games, had discovered gold at the end of it.

The 20-year-old made her decisive move 250 metres from the end, taking over the lead from the fading home force of Christina Hering and driving remorselessly for the outdoor international title she has sought with such intensity in the past 12 months.

Only as she crossed the line, in 1:59.04, did the concentration break, and her right arm came up in joyful acknowledgement.

France’s fast-finishing Renelle Lamote came through in 1:59.49 for a third consecutive European silver, but looked glad rather than sad about it, with bronze going to Poland’s Anna Wielgosz in 1:59.87, with Hering fading to seventh.

“I think it’s more of a mental thing coming into this being my third championships in four-and-a-half weeks, so it was definitely about picking myself up and focusing,” Hodgkinson said. “It is still very tough competition out there, so I made sure I was on the ball – I am just happy I executed well, and managed to come away with a gold medal.”

Lamote added: “In Eugene I caught Covid and the simple secret to recover then was to get rest, not to train. So before the European Championships there was a lot of pressure for me, I said to myself that after having shown a bad side of myself at the worlds I really have to do it well here. This medal is wonderful.”

Britain’s men’s 4x400m team then delivered a second gold on the night with a performance that called to mind the epic Tokyo 1991 World Championships victory over the United States, where the favourites were confounded by the sight of individual silver medallist Roger Black running the first leg.

In this case Matthew Hudson-Smith, who retained his individual 400m title here, ran the opener for Britain, handing over to fourth-placed Charlie Dobson, who had a five-metre lead when the lanes broke.

Lewis Davey held on to it under heavy pressure, enabling individual bronze medallist Alex Haydock-Wilson maintaining his advantage to the line to bring his team home in 2:59.35, holding off strong challenges from Belgium’s Dylan Borlee and Thomas Jordier of France. Belgium took silver in 2:59.49 from France in 2:59.64.

Earlier in the day Greece’s 38-year-old Antigoni Ntrismpioti, who earned her first major championship medal in 19 years when she won the women’s 35km race walk on Tuesday, added a second gold in a rainswept women’s 20km race walk.

Ntrismpioti, who fits in her training around waitressing duties at her family’s restaurant in Karditsa, was the only race walker to contest both women’s events in Munich’s Old Town, and she pulled clear of Poland’s double world silver medallist Katarzyna Zdzieblo with three kilometres remaining to win by 17 seconds in a personal best of 1:29:03, with Germany’s Saskia Feige taking bronze in 1:29:25.

Four years ago in Berlin Ntrismpioti fell in the rain and broke two teeth en route to 13th place in the 20km race. “It’s unbelievable,” said Ntrismpioti. “It was only in the last quarter of the race that I thought I could be in the medals, but not definitely winning.”

Teenage javelin thrower Elina Tzengko earned the fourth title for Greece at these championships. The 19-year-old led from start to finish, opening with 60.82m and following up with her best of the night, a personal best of 65.81m, before concluding with 64.57m.

When Serbia’s two-time world U20 champion Adriana Vilagos pushed Spotakova into fourth place by one centimetre through her fifth-round effort of 60.32m, it seemed as if the Czech veteran was in for a frustrating finale.

But the double Olympic and three-time world champion responded in characteristic fashion with a final throw that put her in silver position. And even though 18-year-old Vilagos moved through to silver with her last effort of 62.01m, Spotakova had her podium spot once again.

“It was a beautiful thing to win a medal after so long in front of both my boys and my husband, and I have a group of 60 supporters who are here with me,” Spotakova said.

“I knew I could throw more in the last round.”