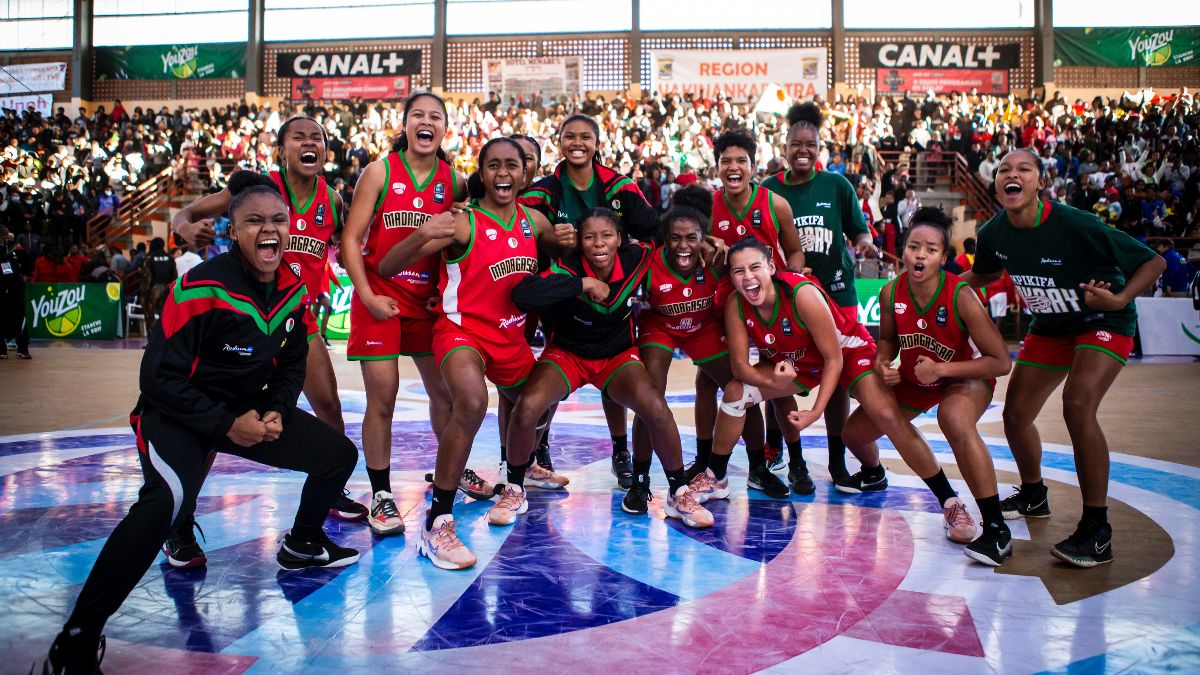 Marion Rasolofoson, was the toast of Madagascar when she scored a game winning three-point buzzer beater that sent her country to the 2022 FIBA U18 Women’s African Championship Semi-Final on Wednesday at the Gymanse Couvert D’Antsirabe.

After four intense quarters the Malagasy claimed a famous 61-58 victory in what is one of the games of the tournament.

Shooting guard Rasolofoson did not have the best of games and for the first three quarters she did not register a single point. She even had to sit out a good part of the fourth quarter, but with seconds left in the game,  the Malagasy star was substituted  in  and she showed up.

With 30 seconds left Rasolofoson, drew a foul with Madagascar a point down 58-57, she would miss the first to the dismay of the packed venue. She redeemed herself with the second one, which levelled the game for the hosts.

In the deciding  moment of the game, the 16-year-old stepped up for her team. Seven seconds were left and Madagascar were in the Tanzanian half of the court. Rasolofoson went to receive a pass and took a bounce or two and with a defender in her face, she launched a clinical shot that swished into the rim. The small, but packed venue went wild and Rasolofoson herself was full of emotion.

The East Africans looked like they would buckle under the magnitude of the occasion as they committed errors that turned into points for their opposition. The end of the quarter saw the home side lead 15-10.

Centre Anjela Minja’s reintroduction in the second quarter settled Tanzania, as her presence limited Madagascar’s ability score in the paint. In offence, the East African’s did not make use of their teammates height, despite her managing four points in the quarter.

Madagascar eventually found a way to put points in on the board through free-throws by Mianjasoa Rakotonirina and a three pointer by Ramahatra. Forward Rakotoba, who scored two earlier in the quarter, showed good footwork down low and landed a jump shot in the dying seconds to give her team a 26-19 lead.

In the second half Tanzania scored five unanswered points to start the third quarter, but Madagascar responded with five of their own, which include a three pointer from Rakotoba to make it a 31-29 lead for Madagascar.

Signs were there that this would be a an intense battle as Tanzania twice levelled the score and even took the lead 37-35.  Six points from Mbungeni,  four points from Mhondo  and a three pointer from Mollel Tanzania in the ascendancy at the end of the quarter.

The  fourth quarter was headed for a photo finish with both teams going at each other, and the lead changed five times.  Adrianjafy scored seven of her points in this quarter,  including three pointer that would give Madagascar a 45-43 lead. While Mbungeni scored eight points, including a jumper that changed the lead 58-57 for the fourth time game.

That would be the last time Tanzania held the lead as Rasolofoson’s heroics stole the day for Madagascar, and earned them a Semi-Final date with Egypt on Thursday.

EGYPT REACHES SEMI-FINAL FOR SECOND TIME IN A ROW

In the first game of the afternoon, Egypt booked their spot in the last four with a 98-44 win over North African neighbour Algeria in the opening quarter-final game of the FIBA U18 African Women’s Championship on Wednesday.

The back court duo of Jana Elalfy and Jana Sallman dominated the game for Egypt and helped themselves to double-doubles in the 58 point victory.

Ibrahim was on point with a her shots from behind the arc. The Algerians tried limit the damage Elalfy and Sallman could do in the paint, which left Ibrahim open and scored two three’s as  Egypt took an 11-3 lead three minutes into the game.

The Egyptians were not discouraged by their fellow North African’s clogging of the paint as they found other ways to score. Ibrahim would finish the quarter with 10 points while Elafy had 11 points. Algeria, who relied more on their outside shooting  found themselves 28-13 down at the  end of the quarter.

Egypt stretched their lead in the second quart with Khalifa and Sallman adding five points respectively, while Elalfy added two in a first half as they held a 19 point lead (50-31).

The defending champions went on a seven point scoring run  (57-31) in the third quarter, which would broken by four points from Doua Yahiaoui , but Egypt regained the initiative  with a jump shot from Elalfy and four points from Sallman.  Egypt built a 32 point lead (70-38) at the end of the quarter and added to it in the fourth quarter.

With the contest as good as over Egypt coach Mostafa Hadhood turned to his second unit, which produced 28 points, while Algeria could only add four points.

The second last game saw  Angola made hard work of their victory over Uganda in the third quarter-final of the day.

The Angolans who were led in scoring by point guard Arminda Sindalawa’s 14 points won 57-44.

Uganda did hang around in the first quarter and led the game 15-12, but Angola regrouped in the second quarter and dominated the rest of the first half. By then Sindalawa had already scored 13 points.

The second half belonged to Angola they proved to be a class above the East Africans. With Angolans taking the third (52-37) and fourth quarters.

Mali encountered little resistance on their path to the Semi-Final, as they thrashed Guinea 117-37 in the final game of the evening.

The game was barely five minutes and Mali had already stormed to a 12-0 lead, forcing Guinea coach Mohamed Kourouma to call a time-to calm his start five.  Fatoumata Sanou by then had already capitalised of Guinea’s defensive lapses to help herself to six points, while star player Maimouna Haidara had four.

Three pointer by Fatoumata Balde opened Guinea’s account. Mali had already stretched their lead and at the end of the quarter they had 32-9 lead over their neighbouring country.

In the last three quarters it was one way traffic as Mali scored at will and the game looked more like practice match than a competitive knockout match. Haidara finished with 25 points, while Sanou had 15 points and Badiaran Doumbia scored 14 points.  Three other players joined the team in scoring in double figures, Bintou Drame (12), Kamite Dabou (11) and Rokia Berthe (10) helped Mali complete the rout.