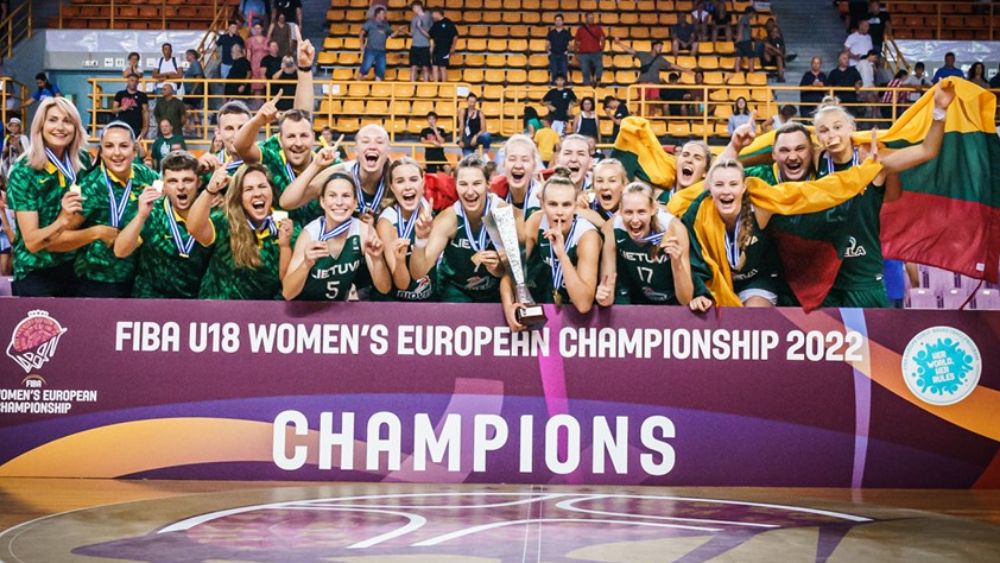 Lithuania have been crowned champions at FIBA U18 Women’s European Championship 2022 after edging out Spain 78-75 in an amazing advert for female hoops on Sunday.

The Baltic nation, who landed their second-ever title in this competition after their 2008 success, secured the precious silverware off the back of MVP Juste Jocyte’s performance who finished with a stunning  28 points, 9 rebounds and 7 assists in the Final.

The loss was tough for Spain’s Elena Buenavida Estevez in particular, who netted a sensational 36 points and was named to the All-Star Five. There were also places in the prestigious lineup for Leila Lacan of France, Frieda Buhner of Germany and Matilde Villa of Italy.

France powered to the last podium step for a third time in four editions after they took down Germany 75-46 in the Third Place Game. Lacan lit it up with 20 points. 7 rebounds, 3 assists and 3 steals as France rode out of sight with one-sided  last quarter.

Meanwhile host nation Greece, who had started the tournament so well, were condemned to being relegated to Division B following their final-day 72-55 loss to Israel. Tamar Singer continued her red-hot form with 10 points and 13 assists to help Israel maintain Division A status.

Elsewhere, Italy claimed a top five finish as Matilde Villa starred yet again with 25 points, 8 rebounds and 6 assists in an 86-79 success against Czech Republic. Finland beat Poland to 7th place with a 71-57 win paced by 17 points from Elina Aarnisalo.

Latvia had no difficulty sealing 9th spot with a huge 69-35 triumph against Turkey, with Enija Viksne finishing in style with 11 points, 10 rebounds and 8 assists. Hungary claimed 11th place after beating Belgium 63-56, despite Nastja Claessens amassing  19 points and 13 boards in defeat.

The already relegated Sweden salvaged some pride in avoiding bottom spot as they beat Bosnia and Herzegovina 94-42 with Saga Eklov harvesting 17 points, 8 assists and 8 steals.