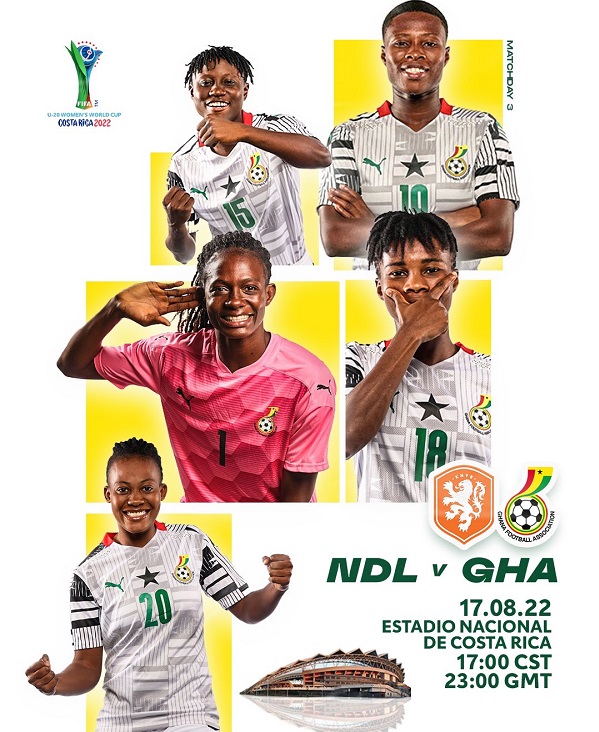 It is all but pride to be played for as Ghana’s Under-20 female football team, the Black Princesses head into their final Group D game at the Women’s World Cup (WWC) against the Netherlands on Wednesday.

After two losses from two games, the dream of making it past the group stages of the Under-20 Women’s World Cup (WWC) is effectively over, and even if they are able to make something out of their final game it will be a consolation but not enough to save their campaign.

After losing their opening game 0-3 to former champions, USA, last Thursday, the Princesses also lost 0-2 against to defending champions, Japan in their second game and technically, that means the end of road for the Ghanaians and they will be catching an early flight back home after Wednesday.

This was a competition that they were hopeful they would finally break the jinx but their campaign has not gone according to plan and now, just like it happened in the previous four campaigns, the team will take an early bow from the tournament.

Comparatively, it has been one of the best preparations that the Princesses have had as the Ghana Football Association (GFA) brought in a technical advisor to assist Coach Ben Fokuo on his first major assignment as a head coach to get the team ready for the mission to break the group exit jinx.

That, did not seem to be enough as they failed to make an impact in the difficult group, their situation compounded by the injury to captain Evelyn Badu, just a day before they kicked off their campaign.

It has not been the scorelines that have disappointing but the general performance of the team which was below average and unless they are able to turn things around, they could end up being the whipping girls of the group.

Ahead of their first game, the Princesses lost their captain, Evelyn Badu, an influential player in the team and that seemed to have affected their psyche as the general performance was not impressive.

Apart from conceding the goals, the Princesses’ performances in the two games have left much to be desired with nothing to show for their experience as four times participants of this competition.

In the opening game, there was no spirited performance and they ended up receiving a red card and four yellow cards and were forced to play defensive for over 70 minutes after Jacqueline Owusu was shown the red card in the 31st minute.

Coach Fokuo made three changes to the starting XI for their second game, starting goalkeeper Cynthia Fiindib Konlan ahead of Grace Banwaa Buoadu, Mukarama Abdulai ahead of Sharon Sampson and also starting Louisa Aniwaa for the red-carded Owusu.

That helped the team a bit as they survived the harassment from the Japanese and managed to hold them to a goalless draw in the first half.

However, they could not go the full haul as in the last 20 minutes, the Princesses’ defence caved in, conceding two penalties within a spate of 10 minutes – in the 62nd and 72nd minutes for infringements in the penalty box.

Worse, it seems the goalscoring skills have also abandoned the Princesses as they are yet to get a goal in this campaign – a sharp contrast to the 13 goals and two conceded in three rounds of the qualifying campaign.

If they do not score against the Netherlands, it will be a repetition of their 2012 campaign in Japan where they ended the group campaign without scoring.

Indeed, Salamatu Abdulai scored but that did not count as it was from an offside position and the competition did not feel the impact of general captain, Mukarama Abdulai who in 2018 at the Under-17 WWC, dazzled the world with her goals and performance which saw her finish that campaign as the topscorer and bronze medalist of the Adidas boots.

With all but pride that is left of the campaign, Coach Fokuo will have to come up with a masterplan to ensure that the ladies can bow out with a consolation, knowing that it was never an easy campaign given the group they were drawn in, but at least, they did not go down without a fight.