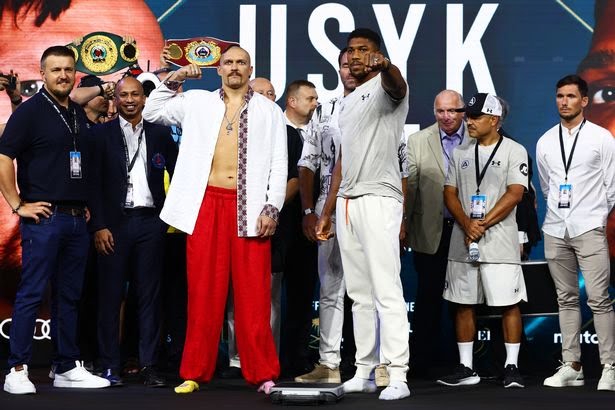 Anthony Joshua will have a 20lb weight advantage when he takes on Oleksandr Usyk tomorrow night.

Usyk had been tipped to be heavier for the sequel in Saudi Arabia, perhaps an indication of his intention to force a stoppage in the return leg. But the speculation came to nothing with the Ukrainian weighing 221lb, exactly the same as he did for the first fight.

Joshua weighed in at 244lb, slightly up on the 240lb he scaled before he put his belts on the line at the Tottenham Hotspur Stadium in London. The Brit has overhauled his training regime since his second career defeat and will have new coach Robert Garcia in his corner on Saturday night.

Both men took part in a lengthy staredown after weighing in but there was no drama in the final meeting before the first bell. Responding to his weight, Usyk said: “You see, your expectations are not always met.” And asked what he saw during the staredown, he added: “Myself… I saw a reflection of myself. We’re going to see [what happens] tomorrow.”

Joshua, who will attempt to win back his belts for a second time, added: “It’s just a face-off; i always say, for me personally, face-offs mean nothing, it’s all about the bell ringing and us throwing leather, face-offs don’t win fights.”

Of Usyk’s weight, he said: “I’ll be honest, all this stuff doesn’t matter, real talk, all this stuff; weight, face-offs, none of it matters to me. I’m just ready for 12 rounds, 100 per cent ready fo 12 rounds and anything short of that is a bonus.”

Usyk is the odds-on favourite to retain his belts and set up a potential undisputed clash with Tyson Fury who has flip-flopped over his retirement in recent weeks. Fury’s promoters Frank Warren and Bob Arum are confident their man will return to attempt to win all four belts while former opponent Derek Chisora has gone as far to say Saudi Arabia already have a deal in place to host the showdown.