Everything you need to know about Manchester United's new signing Casemiro 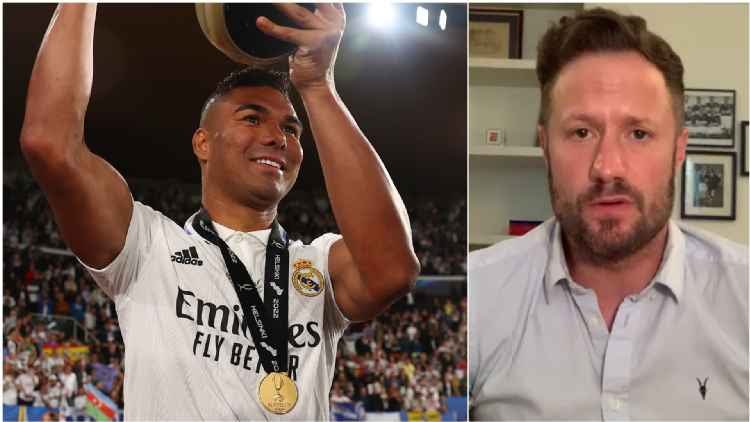 Manchester United have agreed a deal to sign Real Madrid midfielder Casemiro for €60 million, with a further €10m possible in performance-related add-ons, but is he the player to save the club?

Casemiro, 30, is widely regarded to be one of the best defensive midfielders in the world and has won almost everything there is to win in Madrid after moving from Sao Paulo in 2013.

So what can Man United expect?

Casemiro usually sits deep as the central pivot in front of the centre-backs in a 4-3-3 system. He can get forward to help his attacking players in a more box-to-box role but he is geared more to defence than attack.

The midfielder is one of the best at covering his teammates when they are out of position and can move into the full-back areas to stop attacks. He has been compared in style to legendary Real Madrid defensive midfielder Claude Makelele, though Casemiro’s positional sense and determination mark him out as one of the best around.

Casemiro had some impressive stats among his Real Madrid peers last season, playing 32 of the club’s 38 league games (5th=) on the way to winning a double of LaLiga and Champions League.

Casemiro’s departure means Real Madrid lose one-third of their iconic Casemiro/Toni Kroos/Luka Modric midfield, three players who complemented each other perfectly and were fundamental in their recent Champions League wins. The Brazilian’s role in that trio was well-defined as most defensive-minded of the three, protecting Madrid’s defence, winning the ball back and providing a platform on which more attack-minded colleagues could flourish — although he has shown a growing desire to get forward over the years, too.

Only five players, among them Barcelona’s Sergio Busquets, had more ball recoveries than Casemiro (230) in LaLiga last season, and that’s playing for a Madrid team which tends to dominate possession. His awareness is exceptional, and he can often be seen dropping back into defence to plug spaces or help out an out-of-position teammate. His pass completion rate is solid — in LaLiga last year it was 86% — but well behind someone like Kroos, who topped the charts in Spain with 94.9%.

Casemiro does score the occasional goal, especially from long range. His best ever tally in LaLiga was six goals back in 2020-21, while you might remember his spectacular strike against Juventus in the 2017 Champions League final. — Alex Kirkland

Casemiro was 6th in LaLiga for ball recoveries last season, while his defensive actions chart shows how involved he gets all around the pitch.

How he can improve

It will be interesting to see how his no-nonsense style fits into the more physical demands of the Premier League. Casemiro has a reputation among opposition fans for avoiding deserved bookings, but he still picked up 11 yellow cards in LaLiga last season — although surprisingly he’s only been sent off twice in almost a decade in Spain. — Kirkland

Casemiro fills a gaping hole in Manchester United’s squad and one that Erik ten Hag was determined to fix from the minute he arrived at Old Trafford.

United have made no secret about the fact Frenkie de Jong was the top target, but with that deal looking less and less likely to happen with each passing week, they’ve turned their attention to Casemiro. He might be 30, but he’s still vastly experienced and one of the best in the world in his position; United couldn’t really say no when the opportunity came up.

There will be questions about why Real Madrid have allowed him to leave, but the bottom line is that those reasons are not United’s concern. Their only question should be does he immediately improve the team and the answer is, undeniably, yes. Moving from De Jong to Casemiro doesn’t point to much of a recruitment plan, but the Brazilian makes United better. — Rob Dawson

Will he fit in at Old Trafford?

Casemiro walks straight into United’s team because he’s better than anyone Ten Hag has in that position. The question, though, is whether he fits into the way the Dutchman wants to play.

The Brazilan is an uncomplicated footballer who wants to win the ball back and give it to someone with more technical ability, which is why he was so effective in a midfield three at Real Madrid next to Luka Modric and Toni Kroos two of the game’s best distributors. Casemiro isn’t going to drive forward with the ball or set the tempo with his passing in the way De Jong might, but he is going to make United better defensively. He breaks up play, reads the game well and he’s comfortable sitting in front of the back four — which is something United have missed even before Ten Hag arrived.

United conceded too many goals last season and shipped six in two games against Brighton and Brentford. Casemiro’s arrival should help rectify that, if nothing else. — Dawson