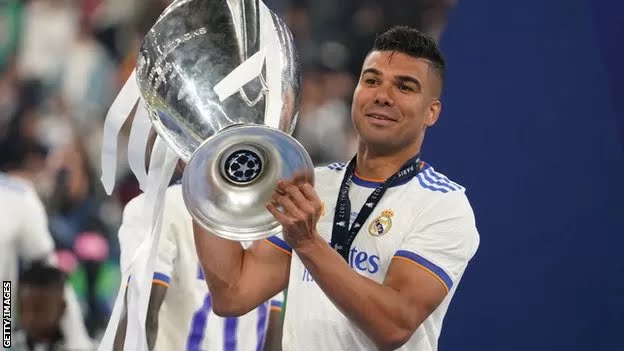 Manchester United have reached an agreement with Real Madrid to sign Brazil midfielder Casemiro in a deal worth up to £70m.

The 30-year-old has been with Real since 2013, winning three La Liga titles and five Champions Leagues.

The fee is an initial £60m plus £10m in add-ons and Casemiro will sign a four-year deal with the option of one more.

United are bottom of the Premier League and host Liverpool at Old Trafford on Monday.

Casemiro is set to become one of the United’s top earners once he completes his move, and will be United’s fourth signing after midfielder Christian Eriksen, full-back Tyrell Malacia from Feyenoord and defender Lisandro Martinez.

After talks to sign Juventus’ Adrien Rabiot collapsed over the player’s demands, United have turned their attention to Casemiro as they look to address weaknesses in Erik ten Hag’s midfield.

Whilst the club are not completely ruling out signing the Dutchman at some point in the future, they admit it is highly unlikely they would get De Jong and Casemiro in the same window.

The transfer will come too late for Casemiro to be involved in Monday’s game against Liverpool.

Casemiro’s impact can be seen by looking at Opta statistics to compare his figures against those of other central midfielders in La Liga last season.

He also contributed to Real’s attacks, ranking fifth for forward passes and joint-sixth for shots among the league’s central midfielders.

Casemiro spent a season away from the Bernabeu on loan at Portuguese side Porto in 2014-15 but returned to Spain the following season after Real activated his buy-back clause.

He has made 222 appearances for the Spanish giants and scored 24 goals.

Casemiro’s four-year contract is heavily performance related, specifically around Champions League qualification, and will put him amongst Manchester United’s highest earners but the club are denying reports in Spain that the Brazilian is doubling his salary.

United sources say they have admired the player for some considerable time and that he was high on their list of targets. They moved for him once it became clear he was available and he wanted to move to Old Trafford.

The club feel it strengthens an area new manager Erik ten Hag identified as a priority. United feel his professionalism, intelligence and strength of character are key attributes which will bring immediate benefits.