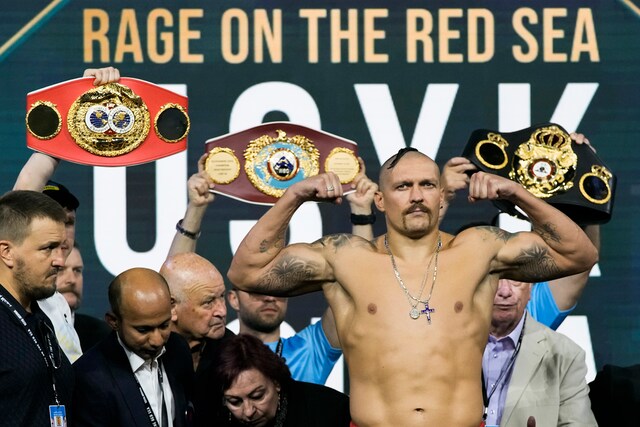 World heavyweight champion Oleksandr Usyk has maintained a similar weight for his rematch with Anthony Joshua.

The Ukrainian boxer, who is defending his WBA, IBF and WBO belts against Joshua in Saudi Arabia on Saturday, tipped the scales at 100.5 kilograms (221.5 pounds) at the weigh-in on Friday.

Usyk weighed in at 100 kilograms (221 pounds) for the first fight in London in September, which he won by a unanimous decision.

Joshua came in at 110.9 kilograms (244.5 pounds), which is slightly heavier than the first fight.

The two fighters shared an intense stare-down after the weigh-in at King Abdullah Sports City, ignoring repeated requests to break away.

“All this stuff doesn’t matter, it’s just about the fight,” said Joshua, who is looking to regain the belts and become a three-time world champion. “Weight, face-offs — none of it matters to me. I’m just looking forward to the fight.”

Asked what he expects to happen in the 10,000-capacity King Abdullah Sports City Arena on Saturday, Joshua said: “I’m ready for 12 rounds. Anything shorter than that is a bonus.”

A more aggressive approach is expected from Joshua after being dominated by the smaller Usyk last year.

Still, the British boxer — known earlier in his career as a knockout specialist — is adamant he is not a “one-trick pony.”

“You have got to have different aspects to your game,” Joshua said. “Use your strengths, but don’t neglect the other areas.

“I need to get my feet out of the mud, use my feet, get my heart rate going, use my attributes. I’m definitely the bigger man. I can keep it rangy or I can keep it short. But what you’ve got to do is compete at the highest level.”