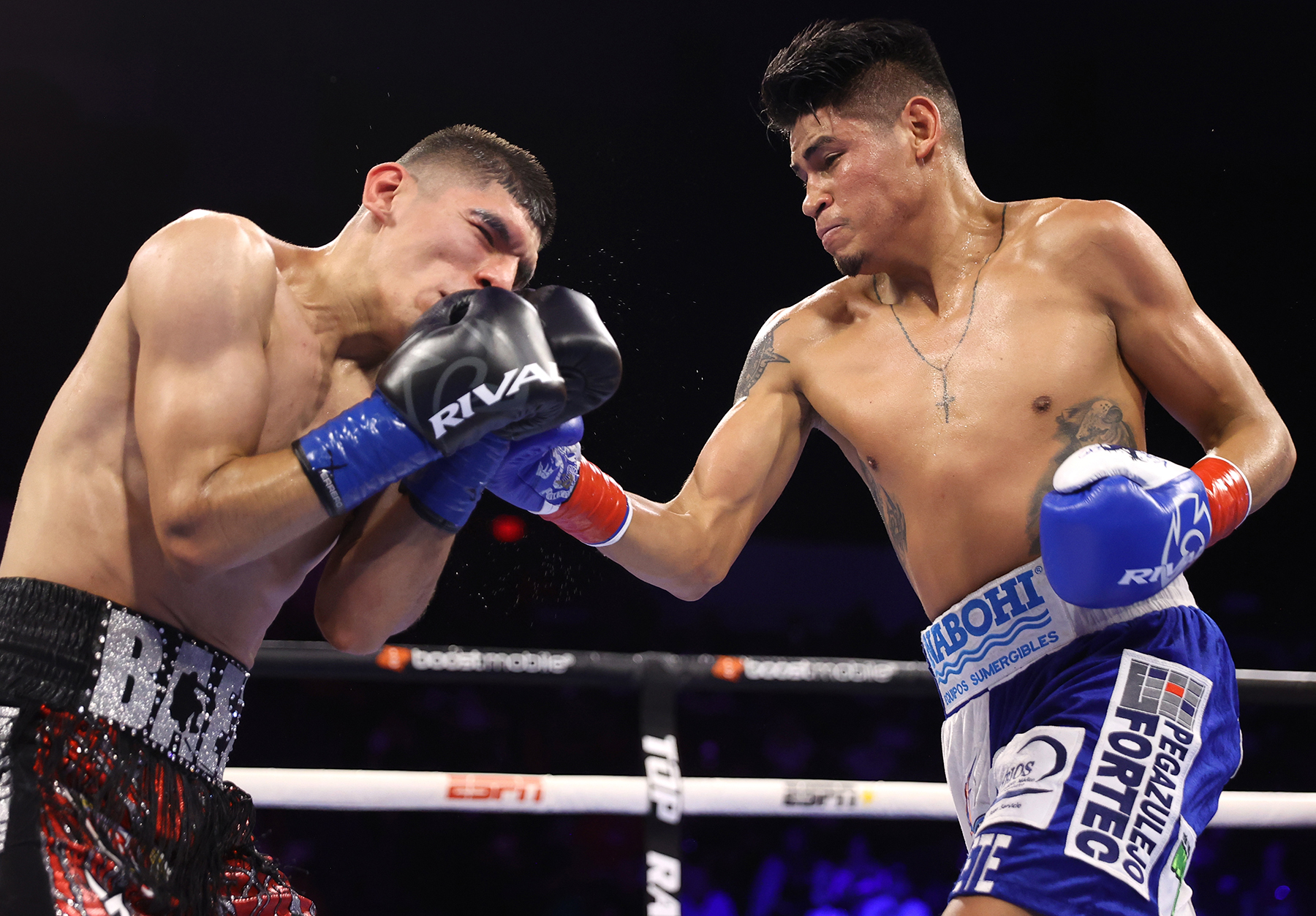 It took some time for Emanuel Navarrete to warm up. But when he did, that was all he wrote. Navarrete defended his WBO featherweight world title with a sixth-round stoppage over Eduardo Baez on Saturday evening at Pechanga Arena.

Baez (21-3-2, 7 KOs), from Mexicali, Mexico, appeared on his way to a shocking upset until a body shot floored him for the count.

Navarrete had not fought for more than 10 months, his longest layoff since winning his first world title in December 2018. The rust came off in a flash in the sixth round, and now Navarrete can look ahead to future title defenses at featherweight or perhaps a move up to junior lightweight.

“I expected a fight like this. I never underestimated Eduardo Baez. I knew that he was an excellent fighter and the fact that he hit pretty hard. It was a lot more complicated than I anticipated. But then came that shot, and I was able to finish him,” Navarrete said.

“That’s a very Mexican punch. It comes with my blood. And you can see, I don’t throw a perfect left hook like you’re used to seeing. But this one came out perfect for me. And you saw the result because not many guys can take that shot.”

It was a rugged affair fought mostly in close quarters, and there were multiple head clashes. Santillan and Luna landed 150 power shots apiece, and Luna landed 22 more blows. The 100-90 scorecards came as a surprise, but the end result was a triumphant homecoming for Santillan.

“It was a lot tougher than I expected. Luna gave me a great fight, and I am just thankful for the opportunity to fight once again in my hometown,” Santillan said.

Nearly 50 years after his grandfather fought in this same venue, Nico Ali Walsh (6-0, 5 KOs) made an emphatic statement in a rematch against Reyes Sanchez (7-3, 3 KOs).

Ali Walsh, who struggled to defeat Sanchez by majority decision last December, knocked out Sanchez with a left hook to the body in the second round.

It was the first fight for Ali Walsh with his new head trainer, Kay Koroma, and the new pairing paid dividends.

“I feel amazing. This was a special win because it was a rematch. It’s everything I’ve been working towards. My hard work is now showing in the ring. I want everyone to see that it’s a new me,” Ali Walsh said.

Delgado, a 2016 Olympian, bloodied Aguilar’s nose in the opening round, but Aguilar’s sheer pressure was effective. Delgado turned the tide in the fourth round, landing a counter right uppercut that stunned Aguilar, who held on and stumbled into the ropes.

The last half of the eight-rounder saw Delgado use his counterpunching to offset Aguilar’s constant forward motion. When the final bell rang, the result was not in doubt, and Delgado swept it on the judges’ scorecards in a career-best showing.

Southpaw hometown favorite Brooks dropped Galicia with straight left in the opening round and cruised to the shutout verdict.

Martinez bounced back from his first career defeat with a one-sided beatdown over former U.S. amateur standout Guerrero.

Martinez found his rhythm in the middle rounds, stunning Guerrero with a counter right hand at the end of the fourth. In the fifth, an explosive flurry against the ropes prompted referee Eddie Hernandez Sr. to step in.

Contreras, from Bakersfield, California, thrilled the home state fans with a pressure fighting exhibition that left Ruiz in retreat for most of the fight.

‘The Caveman’ poured it on in the fifth and sixth rounds, but Honduras’ Ruiz, who has only been stopped once as a pro, survived to the final bell.

Lopez, the IBF No. 1 featherweight contender, lived up to his lofty ranking with a one-sided stoppage over Vargas.

He landed a left hand to the body in the second that put Vargas down for the 10-count.

Antonio Mireles (5-0, 5 KOs) KO 2 Kaleel Carter (2-2, 2 KOs), 1:52. Mireles overcame adversity for the first time in his young career, as Carter scored a knockdown in the opening round.

A short left hand started the damage, but Mireles recovered and fought with a purpose in the second. Mireles’ combination punching stunned Carter, who turned his back and forced the referee to wave it off.