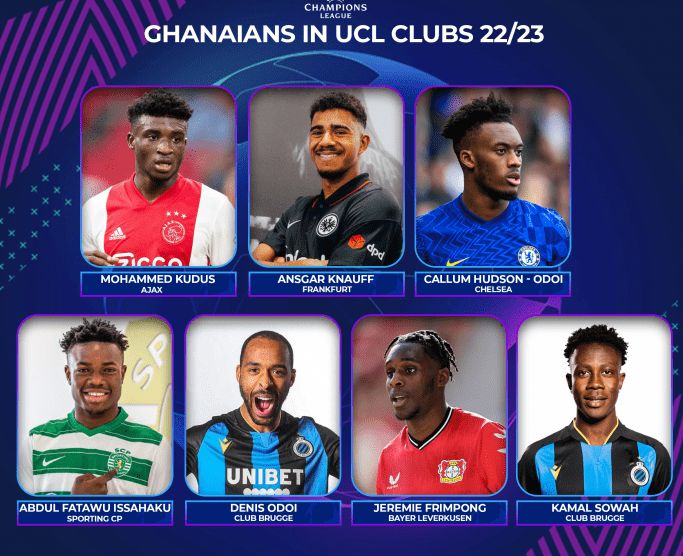 Among the seven players, three of them have already played for the Black Stars in the recent past with Kudus, who has been linked with a move to Everton, standing out as a crown jewel.

Issahaku, who joined Sporting CP during the summer window, will look to make the headlines in the biggest club tournament in Europe when given the opportunity.

Callum Hudson-Odoi has not yet declared his intentions to play for the Black Stars but is eligible to do so before the 2022 World Cup in Qatar starts.

Denis Odoi played a role for the national team during qualification to the 2022  FIFA  World Cup and his beautiful story continues with Brugge as they seek to upset the big clubs. His teammate Kamal Sowah is eyeing a debut Black Stars call-up.

The same goes for Knauff, the winner of the Europa League Young Player of the Year award and Frimpong, who announced that he wants to play for the Netherlands but is yet to feature for them.

Hudson-Odoi is the last Ghanaian to lift the Champions League trophy, doing so with Chelsea in 2021.

The seven Ghanaians will know their opponents after the draw is conducted.

The UEFA Champions League draw will be done at 16:00 GMT on Thursday with 32 teams looking to clinch the coveted trophy in the 2022/23 season.

Real Madrid made the headlines in the previous campaign, beating Liverpool 1-0 in Paris to win their 14th trophy. They will be looking to successfully defend the crown.