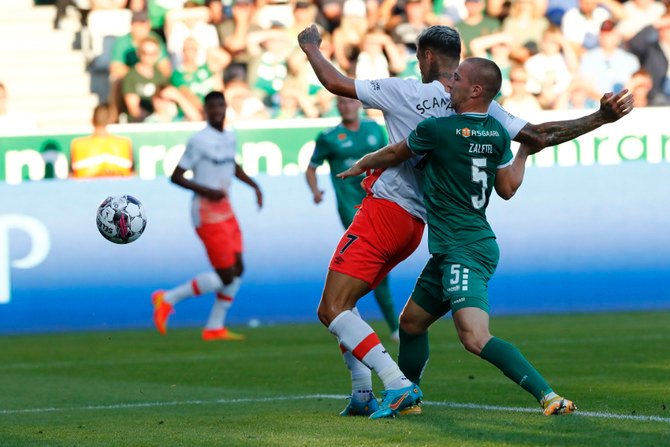 West Ham shrugged off their dismal Premier League start to ease into the Europa Conference League group stage on Thursday with a 6-1 aggregate rout of Viborg in their playoff tie.

The English side were barely threatened but goalkeeper Alphonse Areola had to be alert with a double save to keep out Jay-Roy Grot and Justin Lonwijk.

“It’s massive for us to be in the group stage. We’re fighting every year to get European football for our people and we couldn’t miss this opportunity,” Spanish midfielder Pablo Fornals told the club website.

“We knew that coming here the atmosphere would be tough, and it wasn’t easy to come here and play against a crowd that probably knew it was hard to qualify, but were still here to support their team with everything. It wasn’t easy.

“Viborg were a very good team too. They had really good players with qualities. The throw-ins from the left were difficult to defend and they had a big forward too.”

The Hammers now go into Friday’s draw for the group stage but will then turn their attentions to resuscitating their Premier League campaign.

They are currently rock bottom of the table having lost all three of their opening games without scoring a goal.

Villarreal, who were Europa League champions in 2021, also made the group stage with a 2-0 win at Hajjduk Split for a 6-2 aggregate triumph.

Alfonso Pedraza and Samuel Chukwueze scored the goals for the Spanish side who made the Champions League semifinals last year.

In the Europa League, Hearts were beaten 1-0 at home by Swiss champions Zurich who went through 3-1 on aggregate.

Fabian Rohner scored the only goal of the second leg as the Scots were left to regret a red card handed out to midfielder Jorge Grant 10 minutes into the second half.

Despite the defeat, Hearts’ European adventure is not over as they now drop into the Conference League group stage instead.

Ludogorets of Bulgaria needed a last-gasp extra time penalty by Olivier Verdon to secure a 3-3 draw and a 4-3 aggregate win over Zalgiris in Lithuania after trailing three times on the night.

Fenerbahce were the night’s biggest winners, a 4-1 victory over Austria Vienna giving the Turks a 6-1 win over two legs.