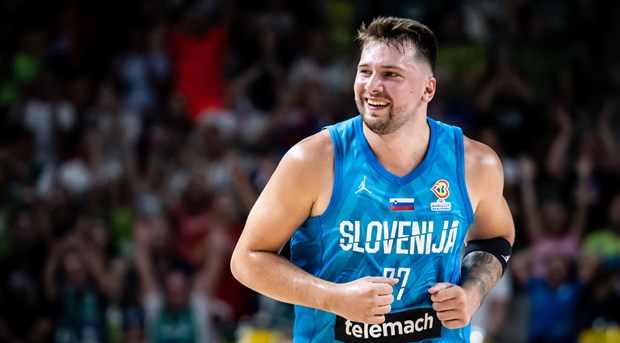 A capacity crowd including numerous former national team stars came out to watch Luka Doncic put on a show, and Slovenia’s hero did not disappoint with a near triple-double in a 104-83 win over Estonia in the FIBA Basketball World Cup 2023 European Qualifiers.

The faithful in Celje gave Slovenia one last bit of encouragement ahead of their next European Qualifier in Window 4 and subsequent defense attempt of their FIBA EuroBasket title.

Things did not start easy though. Estonia were leading 23-18 late in the first quarter and Doncic was talking to the refs and even hearing it from Estonia’s Kerr Kriisa.

The young talent from nothern Europe should have known better as Doncic started pulling the strings and helped Slovenia unleash a 17-0 run to take a 35-23 lead. The margin grew to 21 points in the first half and the hosts never looked back – though Estonia nearly cut the deficit to single figures early in the fourth quarter.

Doncic delivered his usual array of jaw-dropping assists – and that to plenty of teammates to get them all going – while also draining long step-back triples and hauling in rebounds and starting the break.

Luka Doncic was doing Luka Doncic things – and he ended with 25 points, 11 rebounds and 8 assists.

“Luka is Luka,” said the 21-year-old Kriisa, who added about his banter with the NBA star: “He showed a reaction so it means it’s pretty easy to get into his head too. But, yeah, he’s a great player and he played great today.”

That is exactly what the supporters in Celje wanted to see. Slovenia coach Aleksander Sekulic gave them plenty of Luka too as the Dallas Mavericks maestro played 30:10 minutes – despite Slovenia due to face Germany in a big game on Sunday in Munich, not to mention the FIBA EuroBasket 2022 starting on September 1.

Slovenia now sit at 5-2 in Group J – one game behind both Germany and Finland at 6-1 – with three teams reaching the FIBA World Cup and Luka and co. two wins up on Israel. Slovenia and Germany also will face off in the FIBA EuroBasket on September 6.

As impressive as Doncic was, Slovenia showed that they are anything but just Luka. Goran Dragic is liking his unretired life with 19 points and 6 assists; Vlatko Cancar hit for 14 points and Klemen Prepelic chipped in 13 points.

“We are following Luka and Goran, and they are showing the way and how we can win,” Prepelic said.

Cancar talked after the win about the importance of getting the win after two losses to Finland in the February 2022 window – both of which came without Doncic and Goran Dragic.

Slovenia cannot wait until they get a chance to have all of Europe targeting them at FIBA EuroBasket. But there is one piece of business to finish off and that is the qualifier versus Germany on Sunday. And Luka Doncic will be ready.