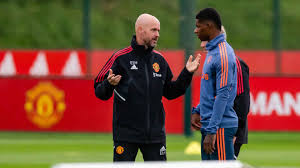 Erik ten Hag has provided a bulletin on his Manchester United squad ahead of the trip to Southampton.

The Reds, buoyed by Monday night’s sweet 2-1 success against Liverpool, head to St Mary’s in a positive frame of mind, looking to kickstart the weekend off with another three points in the 12:30 BST kick-off.

It is the first of two games on the road for United, with a game at Leicester City to follow on Thursday night.

Ten Hag has a difficult decision to make over his team selection, following the excellent showing against the Merseysiders.

New signing Casemiro comes into the equation as his move from Real Madrid has been processed, ensuring the Brazil international is available to make his debut on the south coast.

Anthony Martial impressed when making his first appearance of the Premier League season, off the bench on Monday, but the boss says the Frenchman will not be available for the weekend.

“Casemiro is fit. He did all of the training sessions. He trained first individually and, the last days, he trained with the team.

“Anthony Martial is not fit. He came out with a problem on his Achilles, [coming] out of the game, so we have to wait. I cannot tell a prognosis how long it takes but, of course, I hope that he will be available for the next game [Leicester].”

Harry Maguire and Cristiano Ronaldo were among the substitutes last time out but could be options to return to the XI, while Victor Lindelof and Facundo Pellistri have been sidelined of late. Marcus Rashford, who scored the eventual winner against Liverpool, is another solution to the central attacking role.

The Saints won 3-0 at Cambridge United in the Carabao Cup in midweek, with striker Che Adams scoring twice to add to his brace in the 2-1 win over Leicester City last weekend.

Ralph Hasenhuttl’s side have lost five of their last seven home league games but have started the season well.

“Romain Perraud is back in training,” said Hasenhuttl. “This is good to see because he was out with groin problems but, today, he looked good. He wasn’t ready for the cup game so we tried to give him a good session on Tuesday and now we will see if he is ready for this.”

Full-back Valentino Livramento could, therefore, be the only player ruled out for hosts.