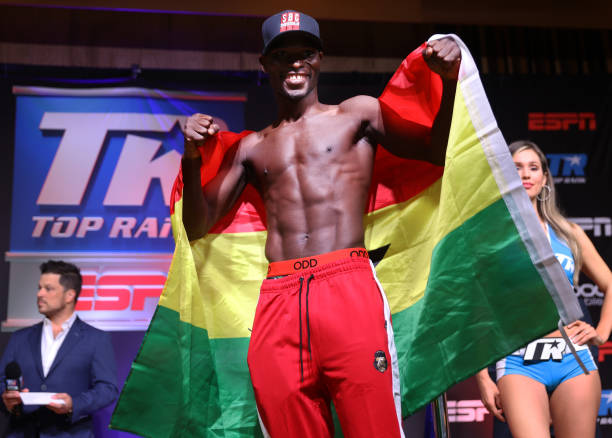 CATOOSA, OKLAHOMA - AUGUST 26: Richard Commey poses on the scale during the weigh in ahead of his junior welterweight fight with Jose Pedraza, at Hard Rock Hotel & Casino Tulsa on August 26, 2022 in Catoosa, Oklahoma. (Photo by Mikey Williams/Top Rank Inc via Getty Images)

The Ghana Boxing Authority (GBA) have debunked reports that they have issued a warning to Richard Commey restraining him from hoisting the national flag and using the national anthem in his upcoming fight against Jose Pedraza in United States.

The said publication which was done by Accra based radio station, Happy Fm on their online portal after an interview with Mr. Mohammed Amin Lamptey, Communications Director of the GBA has since been pulled down as skewed and a misquoting of Mr. Amin’s statement.

The publication was naively carried by others in the media space without doing due diligence and background checks thus creating a furore among folks in the boxing community and the populace in general, possibly affecting the former world champion’s psyche going into such a critical bout.

This situation could have easily been avoided had some media practitioners acted more responsibly.

It would be recalled that Richard Commey was banned by the erstwhile GBA administration under Lawyer Peter Zwennes after verbally abusing them with unprintable words in an interview.

Then came the Abraham Kotei Neequaye administration who found it prudent to lift the ban after pleas from the traditional authorities. But hell broke loose when Commey was requested by the GBA to pay his development fees to the authority after his mega bout against Ukrainian Vasiliy Lomachenko.

He refused to pay and proceeded to launch a scathing attack on the Authority’s executive body; directing them to resort to money rituals if they needed money.

CATOOSA, OKLAHOMA – AUGUST 26: Richard Commey poses on the scale during the weigh in ahead of his junior welterweight fight with Jose Pedraza, at Hard Rock Hotel & Casino Tulsa on August 26, 2022 in Catoosa, Oklahoma. (Photo by Mikey Williams/Top Rank Inc via Getty Images)

The payment of a percentage of a boxer’s purse as development fees to the GBA has been a bone of contention among major stakeholders. With some questioning the basis for it and arguing that it was unfounded.

The appropriate players should rally around to settle this impasse and bring clarity to the concept of development fees.
The media ought to be more responsible in dispensing of duty.

Richard Commey can rise to levels he attained a couple of years back.
ESSE QUAM VIDERI…