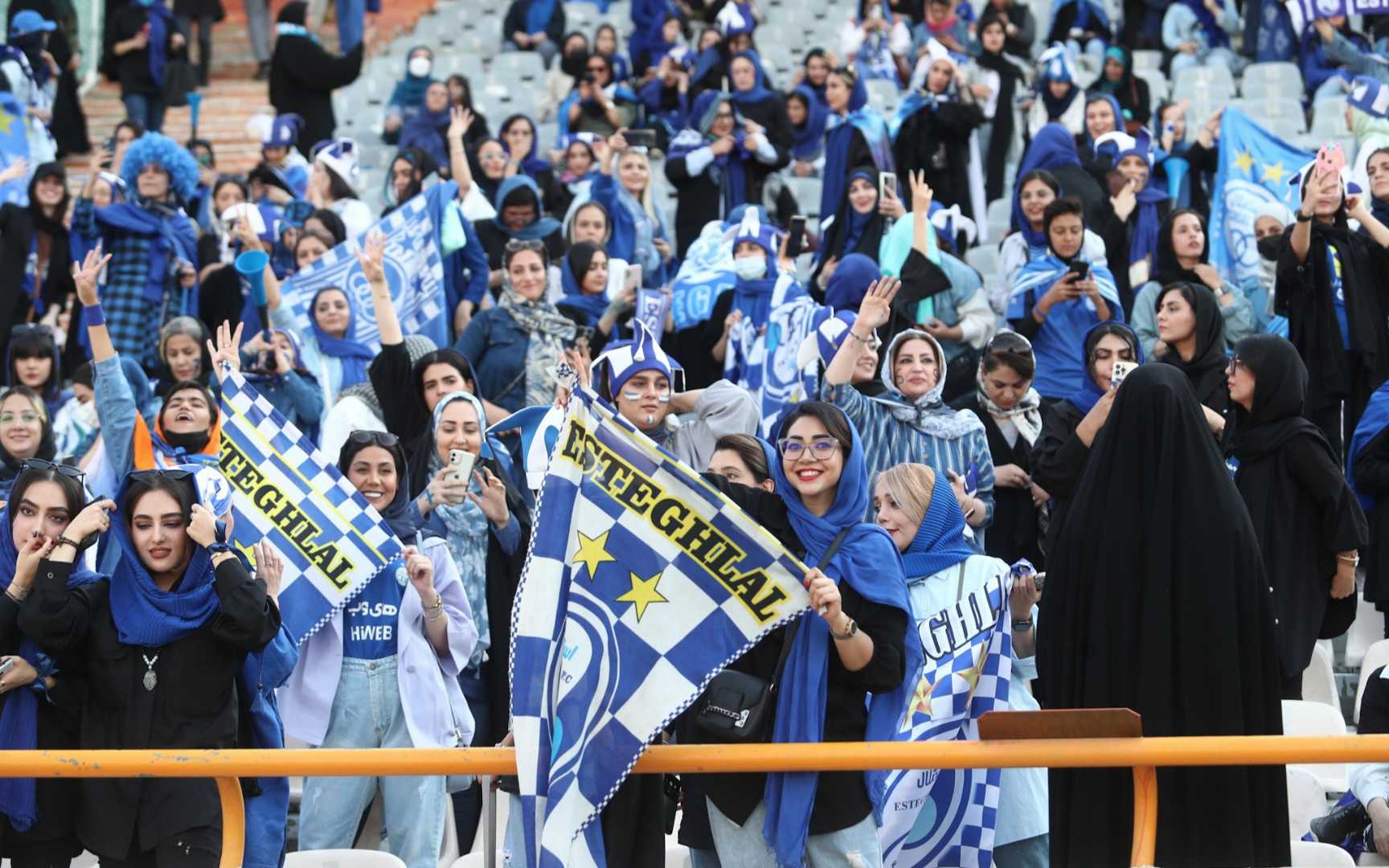 The memory of the “Blue Girl” deeply resonates in the hearts of Iranian female football fans and they once again acknowledged her immeasurable sacrifice in the struggle for women’s rights in Iran at Tehran’s Azadi Stadium on Thursday, 25 August  while attending a domestic football match for the first time since the 1979 Islamic revolution, which imposed an unwritten controversial rule barring women from entering sports stadiums.

Behnaz Taherian, a football journalist with Iran Varzeshi newspaper, could not witness this piece of history due to personal reasons but her friend told her all about the emotional experience:

“Every woman in the stadium was a “Blue Girl” and they remembered her at this match. It was very emotional,” she said.

Three years ago, in September 2019, 29-year-old Sahar Khodayari, dubbed “Blue Girl” on social media because of the colour her favourite Iranian football team, Esteghlal, set herself on fire in fear of being jailed for disguising as a man in order to attend a match.

Her death provoked an outcry in Iran, drew the attention of the world to the country’s appalling treatment of women and intensified calls to allow women into stadiums.

“I think “Blue Girl” reminds the women to try and fight for what they want, their rights. Women in Iran go to cinemas, theatres and parks but why are they not permitted to go to stadiums.”

This latest milestone was achieved in the league match between Tehran-based Esteghlal FC and visiting team Sanat Mes Kerman FC at the Azadi stadium and according to the Iranian Football Federation website, women entered the stadium through a special entrance via a car park were separated from men in the stadium.

Taherian hopes that there would be a time when women would not be limited by an allocated number of seats and do not have to sit separately.

“I hope that the number of females going to the stadium increase in the future and family members can sit together, not separating men and women.”

State media reported that authorities had allocated 500 seats for women – in a 100,000-capacity stadium. Some photos from the match show female spectators holding a sign reading “[Women] deserve more than this.”

While it was the first time in over 40 years Iranian female football fans have gained access to a stadium to watch their local teams, they have been able to attend few matches involving the national team in recent years.

Taherian was among those who got the chance to watch a match at the stadium in January when Iran secured qualification for the 2022 World Cup in Qatar, but she was there as a fan not a journalist.

“I went as a fan because women journalists didn’t have permission to go to the press conference and mixed zone so I preferred to watch the match as a fan and it was very beneficial for me as a journalist because I could speak with the fans and ask about their emotions.”

But she was unhappy that she was entering an Iranian stadium to watch the national team play for the first time at the age of 34. She has been a journalist for more than a decade and she got her first stadium experience outside Iran around four years ago. “That day I was very excited,” she recalled. I cried and wondered why I couldn’t have this experience in my own country, with my friends. It was very emotional for me.”

Female supporters were able to enter a football stadium for the first time in decades in October 2019 to watch Iran’s 2022 World Cup qualifier against Cambodia at Tehran’s Azadi Stadium. World football’s governing body, FIFA, had threatened to suspend Iran if it does not allow women access to stadiums without restrictions and in numbers determined by demand for tickets.

The Iranian authorities were under immense pressure, also from human rights groups, following the self-immolation death of the “Blue Girl”. The ban on women attending matches is due to clerics arguing that women must be shielded from the masculine atmosphere.

At the stadium on Thursday, women paid tribute to Khodayari, chanting “Blue Girl”. Before her death, Khodayari had been charged with “openly committing a sinful act” by “appearing in public without a hijab” when she attempted to enter a stadium “dressed as a man” in March 2019, according to human rights group Amnesty International.

But she only wanted to watch her favourite team Esteghlal play against Al Ain FC from the United Arab Emirates in an AFC Champions League match. On September 2, 2019, facing a six-month sentence, she set herself on fire in front of the courthouse and died in a Tehran hospital a week later from severe burns covering 90 percent of her body.

In March 2022, it was reported that Iran denied women entry to a football stadium to watch the match between Iran and Lebanon with ISNA news agency explaining that: “About 2,000 Iranian women, who had bought tickets for the Iran-Lebanon match, were present in the perimeter of Imam Reza stadium, but could not enter the stadium. For this match, 12,500 tickets were sold, of which 2,000 were for women.”

According to several Iranian websites, the decision to allow women into the game on Thursday came after FIFA sent a letter to Iranian authorities calling on them to permit more women into stadiums.

Esteghal tweeted this welcome message for the women that attended their match on Thursday: “We are happy that you are present at Azadi Stadium today.” The head coach and player of the team reportedly greeted the women inside the stadium.