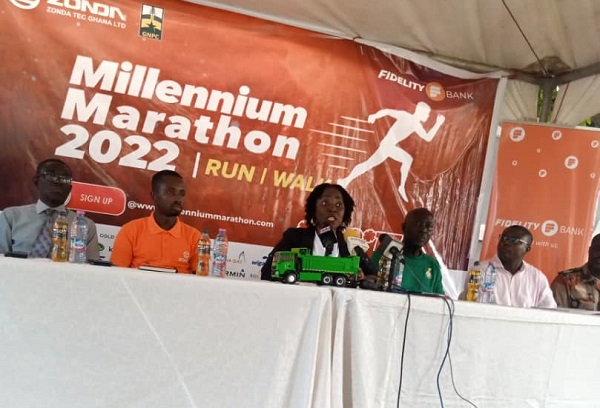 The Race Director of the Millenium Marathon, Mrs Catherine Morton, says this Saturday’s competition will encompass all it takes to make it a race of international repute.

She also revealed that competitors would be randomly tested by the medical team for any prohibited substance to prevent doping.

She further disclosed that five hydration stations would be placed at vantage points to cool off runners during the race.

“We are also going to utilise a certified medical app to track and record injuries sustained by runners which will serve as a database for the future prevention of injuries during such competitions,” he stated.

Speaking at a press briefing at the Millenium Marathon office in Accra yesterday, Mrs Morton said to ensure a fair competition on Saturday, ribbons would be secretly dotted at some selected points along the route to give some credence to the eventual winner.

“In all, 5,000 runners, comprising 1,000 athletes for the 21km race and 4,000 for the 5km race, will take part in Saturday’s event which starts at the Accra Sports Stadium, with the Independence Square being the finishing point,” Mrs Morton revealed.

According to the organisers, the competition has attracted many runners from Belgium, Nigeria, Niger and Italy.

Mr Lawrence Asiedu, a Ghana Athletics Association (GAA) coach, said his outfit was ready to host participants, while the routes, equipment and items needed for the marathon had been certified and approved by the GAA.

“The GAA has inspected all routes and locations for the competition and they are up to the standard of international competitions,” he noted.

Daniel Amoah, an official from the title sponsor, Zonda Tec Ghana Limited, entreated Ghanaians to take part in the marathon for a healthy lifestyle.