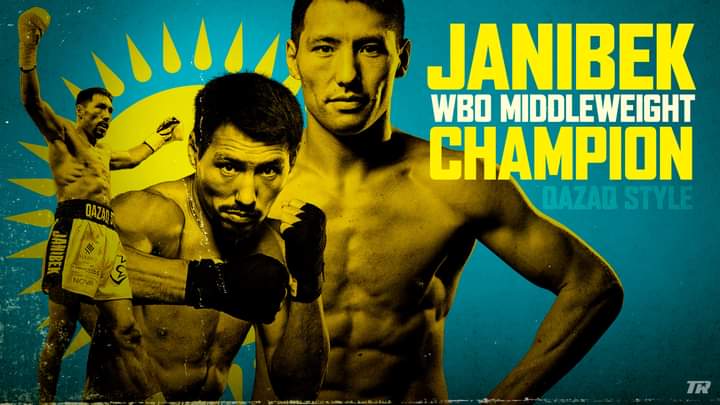 The middleweight division’s boogeyman is now a champion.

Janibek “Qazaq Style” Alimkhanuly (12-0, 8 KOs) was officially named WBO middleweight world champion after the organization’s previous champion, Demetrius “Boo Boo” Andrade, elected to ghost the division rather than make a mandatory defense against Janibek. A 2016 Olympian from Zhilandy, Kazakhstan, Janibek will make the first defense of his world title later this year on a Top Rank on ESPN card.

Janibek (12-0, 8 KOs) made his Top Rank debut as a 2-0 prospect in 2018 and quickly moved up the ranks with victories over the likes of Vaughn Alexander, Steven Martinez, and Albert Onolunose. He broke through in 2021 with one-sided knockouts over former world champions Rob Brant and Hassan N’Dam.

In May, Janibek fought Danny Dignum for the interim WBO middleweight title after multiple prospective opponents turned down the opportunity. Janibek knocked out Dignum in the second round. He is now a world champion dealing with the same issue that plagued him as a contender. Who is ready, willing, and able to try and solve the “Qazaq Style” puzzle?

“I would pick Janibek over any middleweight in the world,” said Top Rank chairman Bob Arum. “He is a southpaw with tremendous power and will reign over the division for a very long time.”

This is what the new WBO middleweight world champion had to say.

“I am honored to be the first WBO world champion from Kazakhstan. As middleweight champion, I will represent my nation with great pride.”

“Demetrius Andrade had no interest in fighting me. I wanted to fight him because I know I would knock him out. He ran away to super middleweight to avoid fighting me. But don’t worry, Demetrius. After I unify the belts at middleweight, we can fight.”

“The middleweight nightmare is here to stay! Now that I am a world champion, I will continue to show that ‘Qazaq Style’ is the best style.”

“I’d have no issue fighting Jermall Charlo for his WBC title. We are both champions, so let’s unify the belts. Charlo would be easy work for me, and he knows that. Champions should fight other champions. It’s too bad the other so-called ‘champions’ do not feel that way.”