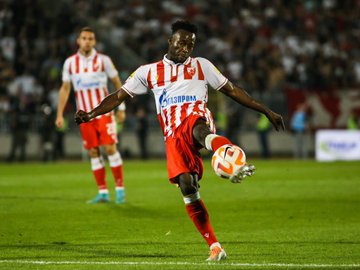 In-form Ghana winger Osman Bukari has reacted to Red Star Belgrade’s draw against Partizan in the capital derby in Serbia.

The Black Stars forward netted his seventh goal of the season to help Red Star pick a valuable point on the road against Partizan.

“The passion!!! Alhamdulilah for another goal. Onto the next!,” he wrote on Twitter after the game.

Bukari scored a scorcher of a volley on the 26th minute mark to give the away team the lead.

Bebras Natcho scored from the penalty spot 11 minutes into the second half to restore parity for the home team, making the final score 1-1.

In his first season in Serbia, the 22-year-old Ghanaian forward has four goals and one assist in league six matches.

He netted thrice in the Champions League qualifiers, making it a total of seven goals in nine appearances.