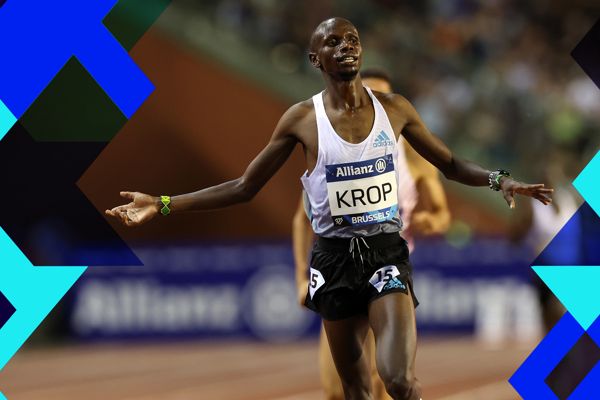 It was a night for silver medallists at the Allianz Memorial Van Damme with Jacob Krop, Yarsolava Mahuchikh and Kara Winger winning their respective events with world-leading marks at the Wanda Diamond League meeting in Brussels on Friday (2).

The silver lining continued in the women’s 1500m, where Ireland’s Ciara Mageean – runner-up at the recent Commonwealth Games and European Championships – earned her first ever Diamond League victory with a national record of 3:56.63 in the 1500m.

The men’s 5000m, one of several highly competitive events in the Belgian capital, resulted in Krop chopping more than a second off his PB to win in 12:45.71, elevating him to sixth on the world all-time list.

Pacemakers led the field through the first 1000m in 2:33.68 and maintained that tempo through to the second kilometre, reached in 5:07.15. Yomif Kejelcha led from Krop through 3000m in 7:41.74 with most of the field running in single file behind.

Krop moved into the lead 300 metres later, maintaining the metronomic pace as the field began to whittle away behind him. USA’s Grant Fisher was the only athlete capable of sticking with Krop on the final two laps, but Krop pulled away from him with ease on the home straight, kicking ahead to win in 12:45.71, making him the second-fastest Kenyan in history.

The 20-year-old Ukrainian had first-time clearances up to and including 1.97m. Australia’s world champion Eleanor Patterson exited with three misses at 1.97m and Olympic silver medallist Nicola Olyslagers went out with a miss each at 1.94m, 1.97m and 2.00m. Mahuchikh had one failure at 2.00m but then moved the bar to 2.02m and got over it on her first try.

She then bumped it up to 2.05m and got over it with her second leap. She ended her series with three attempts at a would-be world record of 2.10m – the first of which was decent – but there was no disappointment on the face of the world indoor champion.

Winger was similarly dominant in the javelin, taking an early lead with 62.47m before improving to 63.82m in round four after world U20 champion Adriana Vilagos took a brief lead with 63.00m earlier in that round. World bronze medallist Haruka Kitaguchi moved into second place with 63.13m in round five while world champion Kelsey-Lee Barber produced a best of 61.07m in the second round, eventually finishing fourth.

But Winger saved her best for last, launching her spear out to a world-leading 68.11m in the sixth round, breaking the US record in the process.

“I feel so incredible,” said Winger, who will be retiring at the end of this season. “My last personal best was 12 years ago; I’ve had two surgeries since then, but I felt really amazing this year. It has just been such a cool year of great decision-making and doing what is right for me.”

One of the biggest surprises of the evening came in the women’s 1500m, where Mageean came from behind on the final lap to break the long-standing Irish record.

Ethiopia’s Diribe Welteji had built up a significant lead in the middle section of the race and looked to be heading to victory. But the chase pack, led by Olympic silver medallist Laura Muir, began to close on the 20-year-old in the final 300 metres.

It was Mageean who had judged her efforts best, though, moving into the lead on the final bend and then kicking to victory in 3:56.63, taking two seconds off Sonia O’Sullivan’s national record set back in 1995. Muir, who beat Mageean to the Commonwealth and European titles, was close behind in 3:56.86, while Ethiopia’s Freweyni Hailu took third in 3:56.94. Welteji held on for fourth (3:57.82) while USA’s Heather MacLean (3:58.76) and Elise Cranny (3:59.61) also finished inside four minutes.

Camacho-Quinn smashes meeting record, Dos Santos gets close to one

Jasmine Camacho-Quinn sped to a 12.27 clocking in the 100m hurdles to break the meeting record.

The Olympic champion, who claimed bronze at the World Championships in Oregon after dealing with achilles issues for the first half of the season, set her fourth meeting record of the 2022 Diamond League season. The Puerto Rican hurdler got off to a strong start and ran a well-executed race to cross the line a convincing winner in 12.27, just 0.01 shy of the lifetime best she set at the Olympic Games last year.

Behind her, USA’s Tia Jones set a lifetime best of 12.38 to finish second and Olympic silver medallist Kendra Harrison was third in 12.40, also inside the previous meeting record. Jamaican duo Britany Anderson (12.44) and Megan Tapper (12.51) were close behind, as best marks-for-place were set for positions third, fourth and fifth.

Brazil’s Alison Dos Santos continued his dream year, notching up another victory in the 400m hurdles. The world champion did just enough to keep his competitors at bay, entering the home straight level with Khallifah Rosser, CJ Allen and Julien Watrin. Once he got over the final barrier, Dos Santos kicked up a gear and cruised home in 47.54, just 0.03 shy of the meeting record which has stood since 1986.

Rosser was second in 47.88. Allen originally crossed the line in third but was later disqualified for a trail leg violation. Watrin set a Belgian record of 48.66 in fourth.

While some events went to the form book, there were surprises aplenty in other disciplines as world champions Shelly-Ann Fraser-Pryce, Mondo Duplantis and Emmanuel Korir were defeated.

The women’s 100m was one of the closest events of the night. Fraser-Pryce, who withdrew from the Diamond League meeting in Lausanne as a precaution, got off to a good start, but world 200m champion Shericka Jackson was never too far behind. Indeed, in the closing stages the tall Jamaican closed in on her experienced teammate and just caught her before the line, winning in 10.73 to Fraser-Pryce’s 10.74. African record-holder Marie-Josee Ta Lou was third in 10.78.

When Duplantis went clear with a first-time attempt at 5.81m, it looked to be business as usual in the men’s pole vault. The Swede skipped the next height but then registered a failure at 5.91m. He also brought the bar down on his second try.

World bronze medallist Ernest John Obiena, meanwhile, got over that height on his third try, putting pressure on Duplantis. The Olympic champion and world record-holder got decent height on his final attempt but once again gave the bar a nudge, meaning he had to settle for second place behind Obiena.

“I’m human and I make mistakes and I definitely made some today,” said Duplantis, who had been undefeated all year before heading to Brussels. “I was just thinking about the wrong things and I didn’t find good rhythm on the runway. It happens sometimes.”

In a loaded men’s 800m field, world and Olympic champion Korir was beaten into third place, but the race was still won by a world champion as Jake Wightman produced the race of his life to triumph in a PB of 1:43.65.

Wightman, the world 1500m champion, got himself into a good position in the middle of the field as the pacemaker went through half way in a swift 49.66. Collins Kipruto and Marco Arop were near the front of the pack at that stage, but they soon found themselves overtaken by their rivals.

Wightman hit the front with 200 metres to go, with Korir and world silver medallist Djamel Sedjati also navigating their way through the pack. The Briton was away and gone, though, and he charged through the finish line in 1:43.65, winning by half a second from Sedjati and Korir, both timed at 1:44.12.

Commonwealth champion Jackline Chepkoech enjoyed the highest quality victory of her career so far as she got the better of a strong field to win the steeplechase in 9:02.43, elevating her to second on the world U20 list.

Following a 3:00.85 opening kilometre, the pace dropped slightly in the middle section as 2000m was reached in 6:04.90. But Chepkoech, who was already leading by then, continued to pull away from the field. World silver medallist Werkuha Getachew finished strongly but was still a second shy at the end, taking the runner-up spot in 9:03.44. Bahrain’s Winfred Yavi was third in 9:08.03.

A stiff -2.9m/s headwind slowed the times somewhat in the men’s 200m, but that made Erriyon Knighton’s run no less impressive as the world bronze medallist achieved his first Diamond League victory.

The 18-year-old, running in lane seven, led off the bend and held on to the lead despite a strong challenge from the rest of the field. Knighton won in 20.07 from Dominican Republic’s Alexander Ogando (20.18) and Canada’s Aaron Brown (20.22).

Fiordaliza Cofil of the Dominican Republic also achieved a first Diamond League victory, taking the women’s 400m in 49.80 – the first sub-50-second run of her career. World bronze medallist Sada Williams was second in 50.15 and Belgium’s Cynthia Bolingo set a national record of 50.19 in third.

World indoor champion Lazaro Martinez was forced to retire after two rounds of the men’s triple jump, but thankfully his second-round leap of 17.49m held up as the top mark of the competition. World silver medallist Hugues Fabrice Zango bounded out to 17.40m in round six to take second place.

Earlier in the evening, Sabastian Kimaru Sawe came close to breaking the one-hour world record. The Kenyan broke away from former world half marathon record-holder Kibiwott Kandie after covering 12,000m in 33:30.

He then ran alone for the remaining 26-and-a-half minutes and remained on pace to break Mo Farah’s world record mark of 21,330m, but with no one for company Sawe struggled to maintain the tempo in the closing stages and he eventually covered 21,250m, breaking the Kenyan record. Kandie finished 310 metres behind.