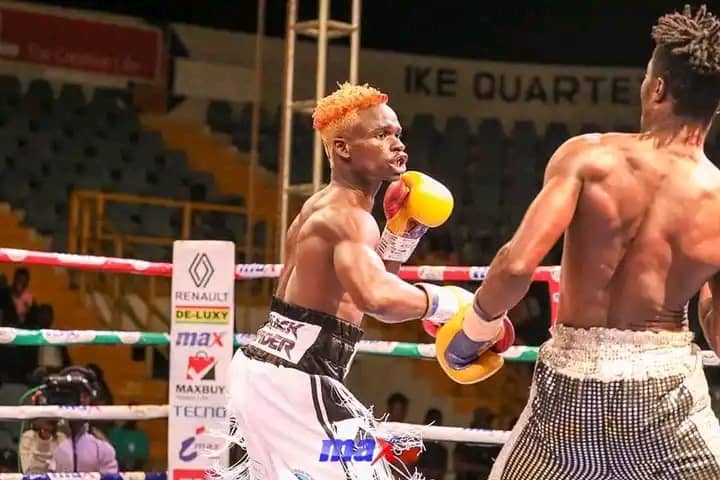 Budding flyweight sensation, Michael Abban of the Black Panthers Boxing Gym, located off The Accra High Street left boxing lovers bamboozled by his tremendous exhibition of pugilistic purity and fistic finesse as he took on a game Michael Tagoe of the Seconds Out Boxing Gym.

Abban , who had to move up two weight classes to take this fight due to the unavailability of opponents in the flyweight division started the fight on an explosive note and surprisingly seemed the bigger puncher of the two.

Also nicknamed ‘Black Spider’ and trained by Coach Ebenezer Adjei aka ‘Coach Killa,’ the southpaw boxer made clear his readiness to take on the best in the world as he emerged victor via a unanimous points verdict over six rounds.

The Deluxy Professional Boxing League is an initiative of Imax Media Group Promotions in collaboration with the Ghana Boxing Authority. The fortnightly event has become the toast boxing lovers in the city of Accra and all over the world: the Bukom Boxing Arena is jam packed on every fight night with fans relishing every bit of the fun.

Hot prospect and banker John Zile alias ‘The Monster’ blasted a rugged Hope Mawuli in two rounds, improving his record to 5-0. He then called out other top contenders in his division to show up for a title clash.