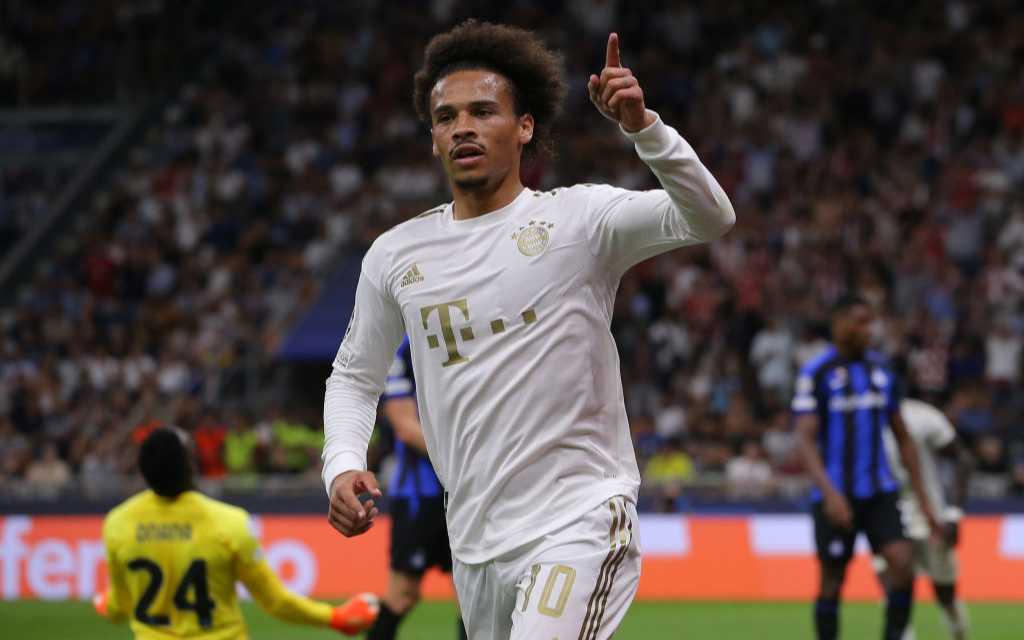 FC Bayern Munich got their Champions League off to a good start on Wednesday (September 7), as Leroy Sanè’s standing-ovation-worthy performance inspired the current German Bundesliga champions to a 2-0 away victory against Inter Milan, who failed to turn the tables on the Bavarian team.

The beauty of football at its best was on display at the San Siro stadium as Day 1 of the UEFA Champions League group stage delivered thrills across the world. With more than 72,000 fans coming from all over Italy and Germany, the San Siro trembled for 90 minutes, a testament of the energy that Champions League nights bring.

Last night Bayern Munich updated two main stats in their records: the Bavarian team have always won against the Nerazzurri at Giuseppe Meazza and confirmed their superiority this time as well, getting their 19th consecutive win Champions League opening games, scoring a total of 47 goals and conceding only two – 29-0 in the last ten confrontations).

Bedlam received FC Inter bus outside of the Giuseppe Meazza stadium, with thousands of spectators cheering for the team and setting the tone for the night.
The San Siro stands – sold out for the occasion – were quickly filled with fans coming from all over the country to support Simone Inzaghi’s team and their efforts to win their opening match.

FC Bayern Munich fans, however, did not hold back as well: thousands of fans came from Germany to support the Bavarian champions, showing before the kick-off a white and red choreography. Songs and celebrations by both sides accompanied the teams as they stepped onto the field, with the stadium rumbling as the Champions League anthem was played.

FC Inter were not even given the time to lick their wounds after suffering a 3-2 defeat in the Derby di Milano in the Serie A at the weekend. Against the toughest team in Group D of the UCL, Simone Inzaghi preferred Edin Dzeko rather than Joaquin Correa to tag with Lautaro Martinez as the main striker.

The 46-year-old coach confirmed the 3-5-2 line-up: German left-sider Robin Gosens made his debut as a left-wing from the very first minute, with Denzel Dumfries confirmed on the right. Cameroon keeper Andrè Onana replaced team captain Samir Handanovic in front of goal with Armenian national team star Henrikh Mkhitaryan replacing Nicolò Barella in the trio of midfielders with Hakan Calhanoglu and Marcelo Brozovic.

The Bavarian team, on the other hand, have not lost a match yet in their season (3 wins and 2 draws as they are third in the Bundesliga standings). Julian Nagelsmann confirmed the 4-2-3-1 front-wheel drive, despite the 1-1 draws against Union Berlin and Borussia Mönchengladbach in the Bundesliga, with Leroy Sanè, Thomas Muller and Kingsley Coman to support Sadio Manè as the main forward.

Bayern Munich already put pressure on their opponents with two shots by Joshua Kimmich in the very first three minutes: the German team took control of the match from the beginning, despite showing some uncertainties in the defensive area as Lautaro Martinez found his way to shoot two times.

The setting of the match followed a defined line: conduction by Bayern, who managed the ball possession with confidence, and Inter ready to hit on the counter, taking advantage in particular of Andrè Onana’s long balls for Dzeko in the opposing half of the pitch.

The Italian vice-champions suffered many attempts from Bayern – 21 in total – before the first goal was scored in the 25th minute. Two minutes after a fancy save by Onana (minute 23), Leroy Sanè received a perfectly served assist from Kimmich, unhinged the defensive cage built by the Nerazzurri, dribbled even the goalkeeper and scored his first goal in this Champions League campaign.

Despite a promising header by Edin Dzeko on 30 minutes – German keeper Manuel Neuer showed once again his skills and saved his team from conceding. Bayern kept controlling the ball possession until the end of the first half.

The Nerazzurri came back to the pitch with a different mindset in order to manage a possible comeback. No change of men, but in attitude from FC Inter, which forced Bayern Munich to lower their midfielders line: two promising attempts by Danilo D’Ambrosio and Edin Dzeko made Bayern Munich waver in the first minutes of the second half.

But Bayern began to turn the screw as the second half continued. A decisive combination in Inter half of the pitch decided the final outcome: Bayern, in the Nerazzurri penalty area, broke Simone Inzaghi men’s coordination, as D’Ambrosio – trying to intercept Sanè’s square pass to Sadio Mane – scored an own goal by accident under the pressure from Julian Nagelsmann’s team (minute 66).

After conceding the second goal Inter lost confidence, as the rhythm lowered and Bayern maintained their lead. Inter, however, had the chance to reopen the match and went close late on when Argentinian forward Joaquin Correa, in the 82nd minute, failed to score right in front of Neuer, who perfectly covered his net.
Bayern Munich were simply too much to handle for FC Inter.

It would be ungenerous to speak of a negative performance by the Nerazzurri, who tried to put the Bavarian team in difficulty in many phases of the match, but Nagelsmann’s team always gave the impression of being in control of the match and knowing how to be lethal in acceleration.

With this victory Bayern Munich achieved its first international win of the season, and are second place in Group D behind FC Barcelona, who scored five goals against the Czech Republic’s current champions FC Viktoria Plzen, propelled by Robert Lewandowski’s first hat trick with the Blaugrana jersey.

At the end of the match, all the 72,000 fans who attended stood up and clapped for the team despite their loss over the German reigning champions, who also enjoyed cheers from their part of the stadium.
From the Bayern perspective, this is a satisfying result to put the two straight Bundesliga draws behind them, while Inter had their pain compounded from defeat in the Milan derby over the weekend.

Both teams fully honoured the Champions League stage in a performance that perfectly sums up the importance of the most important stage: every ball is contested with the utmost competitive spirit, every action experienced by the public, with the stadium literally trembling to every key action.

Now the competition goes on as Bayern Munich will face next week (September 13) FC Barcelona on Day 2 of group stage while FC Inter will clash against Viktoria Plzen on the same day.