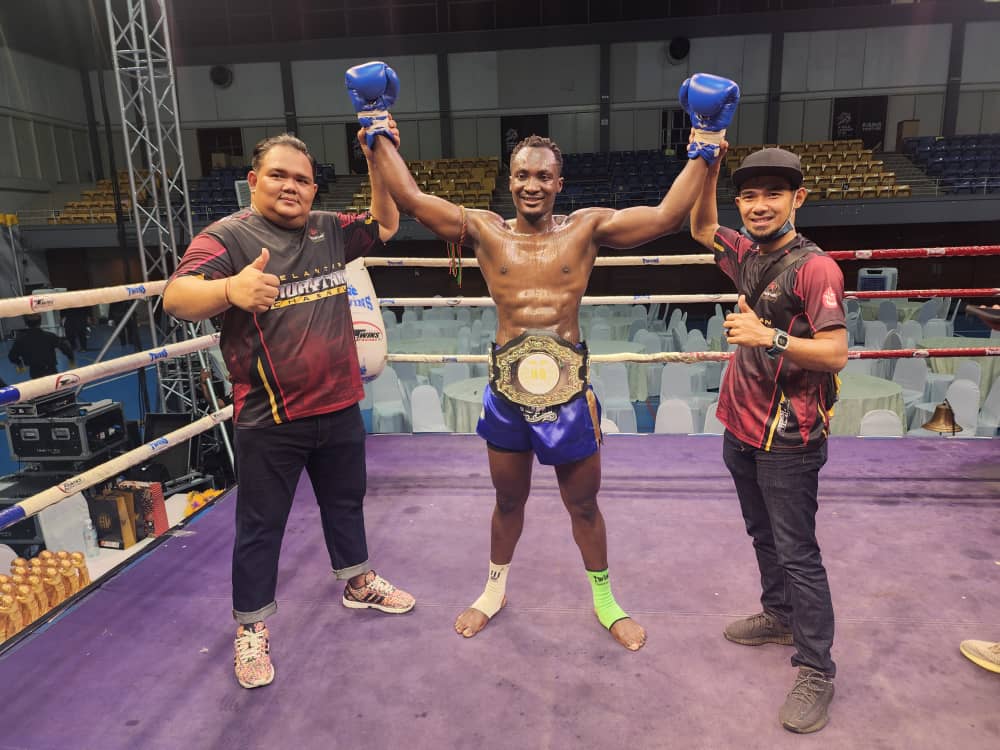 Dah celebrates with his team after being declared winner

The Ghanaian weathered the storm amid the huge disadvantage of fighting in front of a hostile crowd in enemy territory, in the end the judges had no choice than to declare Dah the winner of the 75 kg clash on points at the Kompleks Sukan Panasonic Shah Alam in the Malaysian capital.

And it is a victory that the Kelatan Muay Thai Channel (KMC Fight Club) fighter not only delights in, but has reinvigorated his unwavering desire to be recognised by the (Sports Writers Association of Ghana) SWAG Awards.

“It was a really tough challenge and I’m very excited with the hard win, it was well deserved. It has also opened more doors for me again for a next fight maybe by ending of the year,” an overly elated Dah told Sportsinghana.com via phone after the fight.

“My focus remains on grabbing more wins in the ring because I told you of my dream to win the SWAG award, I know if I keep winning more fights and titles, no one can ignore me forever. I will keep training and be ready at all time, anytime, anywhere, anyplace, whenever I’m called for a fight,” he added.

A well travelled kickboxer who has fought and won titles in Hong Kong, China, UAE and many other countries across Asia, Gerald Dah never forgets about his roots and always makes time to celebrate his fans and countrymen.

“A million hugs amd thanks to my fans here in Kelatan and in Ghana for their supports and prayers always whenever I have fight, I’m grateful and bless to be their top fans’ fighter. May God bless them always and we will soon reunite to celebrate together,” Dah stated.

“Also so much thanks to KMC Fight Club for letting me being a part of the team family and my promoter Mr. Zakiyamat as well, I appreciate all their support,” Dah signed off.