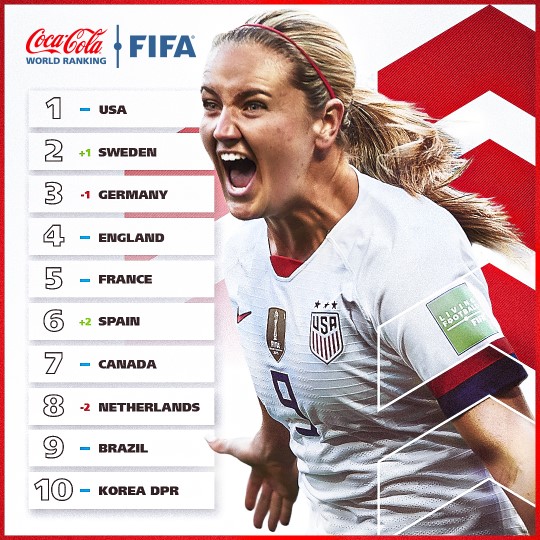 There have been changes aplenty in the latest FIFA/Coca-Cola Women’s World Ranking, which will be used to determine the seedings for the Draw for the FIFA Women’s World Cup Australia & New Zealand 2023™ (Draw procedure available here ).

The Draw will be held in Auckland (New Zealand) on 22 October, with the Draw for the Play-Off Tournament taking place eight days earlier on Friday 14 October.

The three teams at the top in the August 2022 ranking are still there, with one slight change in the order. Though USA (1st, -) remain out front, Sweden (2nd, plus 1) have jumped into second place at the expense of Germany (3rd, minus 1). England (4th, -) and France (5th, -) complete the top five.

There is plenty of movement below them. After their 2-0 defeat of USA on Tuesday, Spain (6th, plus 2) climb two places, while Netherlands (8th, minus 2) drop two. No fewer than nine teams between 11th and 20th changed positions, among them Belgium (20th, minus 1), who suffered the biggest points drop in the whole ranking (minus 32.46).

Newly qualified for the intercontinental play-offs for Australia & New Zealand 2023, Portugal (23rd, plus 4) were the highest climbers in the Top 50 with a rise of four places and 54.19 points. However, nobody made more progress in the October ranking than Estonia (96th, plus 10), who leapt ten places into the top 100, while Bangladesh (140th, plus 7) rose seven themselves.

The Draw for the Play-Off Tournament for the FIFA Women’s World Cup 2023™ will take place at 12.00 CET on Friday 14 October.

The following ten teams have qualified for the play-off tournament:

The next FIFA/Coca-Cola Women’s World Ranking will be published on 9 December 2022.

Leader USA (unchanged)
Moves into top 10 None
Moves out of top 10 None
Matches played in total 133
Most matches played Tanzania, Bangladesh, Bhutan (5)
Biggest move by points Portugal (plus 54.19)
Biggest move by ranks Estonia (plus 10)
Biggest drop by points Belgium (minus 32.46)
Biggest drop by ranks Kazakhstan (minus 11)
Newly ranked teams Syria, Pakistan
Teams that are no longer ranked None