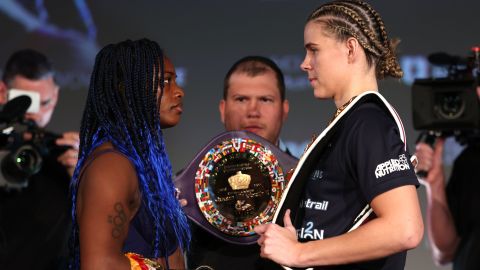 Face-to-face for the promotional photoshoot, and the fight between Britain’s Savannah Marshall and the USA’s Claressa Shields has already begun.

“I’ve got plenty of confidence,” Shields taunted Marshall as the camera flashed, “I came over here, come to America.”

“No power though,” Marshall retorted.

The two women, whose bitter rivalry stretches back 10 years, will face off for the undisputed middleweight championship on Saturday in London on a historic night for women’s boxing, marking the first-ever all female card in the UK, as well the first time two women will headline at the O2 Arena.

It is the latest landmark during a historic year for the sport in which Katie Taylor and Amanda Serrano became the first women to ever headline at Madison Square Gardens in May.

Women’s boxing was banned in the UK as recently as 1998, and the rivalry between Marshall and Shields covers almost half the time in which the sport has been legal.

It began back at the 2012 AIBA world championship when Marshall emerged victorious on points, 14-8, inflicting the only defeat on Shields that she has ever suffered in her professional or amateur career.

Marshall won that world championship a few days later while a then 17-year-old Shields won the Olympics a few months later.

As two opposites, both in terms of fighting styles and personality – Shields is outspoken and fights with finesse while Marshall is shyer and relies on power – they have always clashed.

“I am happy that I finally get the chance to show her that you may have won the fight in 2012, but you won’t win the war. It’s a war, you know what I’m saying. She is going to lose come this Saturday and then all this talk for the past 10 years will go, it will disappear because that is the only thing she has to live off of.”

Since that fight in 2012, Shields has built her reputation as one of the best female fighters ever – remaining undefeated, winning two Olympic gold medals, and becoming the only boxer in history to hold all four major world titles simultaneously in two weight classes.

Shields celebrates victory with her belts after the WBO, WBA, IBO and WBF Women’s Middleweight Title fight against Erna Kozin.

“I am not [using that fight as motivation],” Shields added. “I’m not a person that cares about something that happened 10 years ago.

“It does not matter to me, but what I do know is that I have gotten better over the years, and I have challenged myself to be better after every fight … So I was never able to live off a victory or actually embrace a win or anything. You just win and move on.”

Marshall, meanwhile, was knocked out of the preliminary rounds at the London and Rio Olympic Games, suffered from social anxiety and considered retiring from boxing before turning professional in 2017 and building her own imposing reputation.

Both Marshall and Shields enter this fight with a 12-0 record, the former as the WBO titlist and the latter as the unified WBC, WBA and IBF 160lbs champion.

“It was a long time ago, 10 years ago, it means nothing, but like I said before it gets under her skin, it winds her up so of course I’m going to bring it up,” Marshall told Sky Sports.

“I know all I need to know about Claressa, I’ve known her for a long time, I’ve watched many of her fights, it was just about keeping sharp and going over the gameplan a little bit more.”

They will make their ring walks at 9:40pm on Saturday, following the world super-featherweight title unification clash between Mikaela Mayer and Alycia Baumgardner.