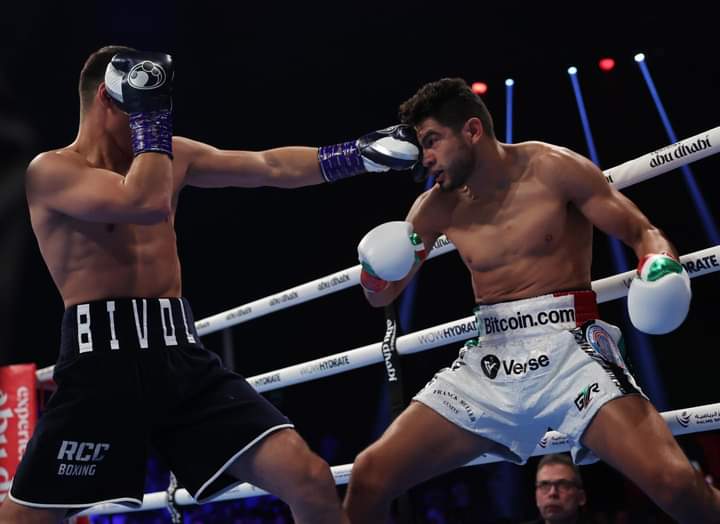 It’s safe to say that 2022 is a year that Dmitry Bivol will never forget.

An exclamation point was placed on a Fighter of the Year-worthy campaign for the unbeaten Bivol, who followed up a career-best win over Saul ‘Canelo’ Alvarez with another dominant performance against a top Mexican fighter. Clean boxing paved the way for Bivol to soundly outpointed unbeaten mandatory challenger Gilberto ‘Zurdo’ Ramirez to defend his WBA light heavyweight title in their DAZN-aired main event Saturday evening from the Etihad Arena in Abu Dhabi, United Arab Emirates.

“I’m glad to have beaten Zurdo,” Bivol told reporters during the post-fight press conference. “44 fights he won before. Now I’m the first to beat him. Three years ago, I first wanted to fight him. This means a lot to me.”

Ramirez opened his first title fight in nearly four years shooting his right jab while holding his hands high. Bivol was unbothered by the height and massive size advantage enjoyed by his challenger, standing directly in front of the 31-year-old southpaw from Mazatlan, Mexico. A straight right hand by Bivol landed flush on Ramirez’s chin, also coming back with a right hand and left hook as Ramirez briefly dipped down in a failed effort to avoid the champion’s offensive attack.

Bivol pumped his jab and then immediately slid out of harm’s way whenever Ramirez attempted to respond in round two. Ramirez pawed with his right hand but couldn’t time Bivol with his left hand behind it. The unbeaten Kyrgyzstan-born boxer landed a combination, driving Ramirez to the ropes inside the final 30 seconds of the round.

Ramirez enjoyed greater success with his straight left in round three, splitting Bivol’s normally impenetrable guard. Neither fighter took a backward step, with much of the action spent at center ring. Ramirez took the lead during most of the exchanges, as Bivol saw a decrease in his punch output.

The first sign of either boxer being hurt came early in round four. Bivol scored with a right to the body, later followed by a right hand upstairs to drive Ramirez to the ropes. Ramirez quickly recovered but was unable to immediately respond. Ramirez managed a left hand late in the round but again unable to put together a sustained attack to make him pay.

Ramirez boxed well for much of round five but was still unable to land anything of consequence. Bivol made him pay, closing the gap as he drove Ramirez to the ropes late in the round. Ramirez looked to make up ground in round six, letting his hands go but with Bivol still landing the cleaner, more effective blows.

The second half saw momentum stay with the defending champion. Bivol blocked a left hand by Ramirez, responding with a jab and right hand. Ramirez briefly cornered Bivol, who countered with a right hand and quickly slipped away from the ropes.

Bivol poured on the attack in rounds eight and nine, even as Ramirez sought to pick up the pace. Bivol constantly landed the cleaner, straighter, and harder punches, then returned to a tight guard whenever Ramirez attempted to return fire.

Action slowed in round ten, which Ramirez tried to use to his advantage. Bivol stood directly in front of his challenger, not throwing as much as in the preceding rounds but still effectively picking his spots. Ramirez pumped his jab and threw his left with conviction, though rarely finding its target.

Ramirez was urged by head trainer Julian Chua to go for broke in the twelfth and final round.

The advice was carried out as best as Ramirez could manage but just lacked the energy to land anything of substance. Conversely, it was Bivol who threw and landed as if he needed the round to win the fight. Ramirez briefly stopped punching midway through the round as Bivol landed at close quarters. The defending champ spent the final 30 seconds moving in and out before planting his feet to drive home a right hand before the bell.

Ramirez suffers his first defeat, falling to 44-1 (30KOs). It came in a fight he has demanded for years and worked his way to mandatory challenger to ensure the title shot and—in his mind—an effort that should have resulted in his becoming a two-division titlist.

“I did my job, I went to the body,” Ramirez told DAZN’s Chris Mannix. “I thought I did enough to win. The judges, they did their job. Congratulations to (BIvol).”

The fight was the first at light heavyweight to go the distance for Ramirez. His run included five straight knockouts after ending his WBO super middleweight title reign following a repeat win over Jesse Hart in December 2018.

“I didn’t expect for (Ramirez)… he has good timing but he’s slow,” Bivol noted during the post-fight press conference. “He’s slower than me. I could see his punches coming. When I landed he countered to the body. That was it. He’s slow but he has good timing. In sparring session, I tried to push forward. He throws a lot of punches, which tells me you are not strong. When your opponent is not strong, you can push forward.”

The win comes on the heels of Bivol’s perceived upset over Alvarez on Cinco de Mayo weekend in Las Vegas. Alvarez entered the fight as the 2021 Fighter of the Year and undisputed super middleweight, who moved up in weight to unsuccessfully challenge Bivol for the WBA light heavyweight title.

That victory, coupled with his performance on Saturday, saw Bivol far and away establish himself as the leading 2022 Male Fighter of the Year candidate.

The conversation has already turned to whether a second fight with Alvarez is in his future. Their DAZN Pay-Per-View headliner in May came with a rematch clause, which Alvarez has yet to enforce as he was already tied to a third fight with Gennadiy ‘GGG’ Golovkin. The suggestion was made that Bivol could move down to 168 and challenge for Alvarez’s undisputed super middleweight crown, then move back to light heavyweight for a four-belt championship unification with lineal/WBC/IBF/WBO champion Artur Beterbiev (18-0, 18KOs).

Bivol has not weighed less than 173 pounds as a pro and has not fought at super middleweight since the amateurs. The payday that would come with an Alvarez rematch could help further motivate the consideration to drop down in weight, which might prove to be a more natural fit.

“When I fought at 75 kilograms [roughly 165 pounds], I was fighting first to make weight and second, against my opponent. I decided that I don’t want to make that weight. But I worked with nutritionists and learned how to make weight. Before the weigh-in for this fight, I ate. I had small breakfast and then came to the scale to make weight.

“I think we could talk about it, of course. It’s not my preference, but we could.”

For now, Bivol can sit back and celebrate a 2022 campaign that will likely go unmatched by any other male boxer by year’s end.