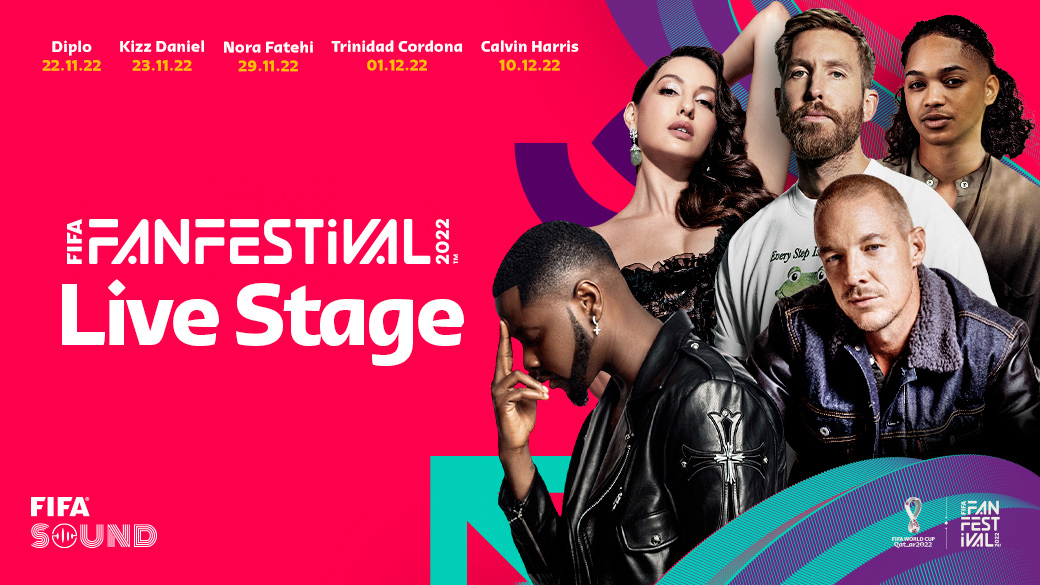 Five international, award-winning musicians will perform on the Qatar 2022 FIFA Fan Festival™ mainstage as part of the FIFA Sound lineup. Diplo (US) on November 22, Kizz Daniel (Nigeria) on November 23, Nora Fatehi (Canada) on November 29, Trinidad Cardona (US) on December 1 and Calvin Harris (Scotland) on December 10. These artists are all slated to enrich the great programme of the FIFA Fan Festival over the 29 days of the tournament at Doha’s Al Bidda Park , among more than 20 additional top-level entertainers from around the world performing at the event.

The FIFA Fan Festival will provide new ways for fans to celebrate their shared passion for football while experiencing the best in music, entertainment, local culture, food, games and lifestyle in a true festival environment.

“We look forward to bringing together some of the world’s biggest artists on one stage in Doha to celebrate the beautiful game and create a truly electric atmosphere,” said RedOne, FIFA’s Entertainment Executive. “While these artists come from different backgrounds and musical genres, they are connected by a shared passion for music and football, like our fans. The FIFA Fan Festival will have something for every kind of fan and we’re excited for what’s ahead.”

Born Thomas Wesley Pentz, Diplo is one of the most dynamic forces in music today, having toured the world over several times and collaborated with the biggest global artists including Beyoncé, The Weeknd, Madonna, Bad Bunny and countless others.

Earlier this year, the 11-time Grammy-nominated artist released a self-titled album, his first full length album in 18 years, to critical acclaim via the deep house imprint he launched in 2019, Higher Ground, with a deluxe edition to follow.  The album features four US Dance #1s for Diplo and the label: “Don’t Forget My Love” with Miguel; the Grammy-nominated SIDEPIECE collaboration “On My Mind”; and “Looking For Me” and “Promises” with Paul Wolford and Kareen Lomax.

In 2020, Diplo debuted his first country album, ”Thomas Wesley Chapter 1: Snake Oil”—now certified Gold—as well as his first ambient album, ”MMXX”, and continues to helm his own long-running label Mad Decent. He’s also a member of the now iconic Major Lazer, which most recently released ”Music Is The Weapon”, their first album in five years, and makes up one third of LSD, the psychedelic supergroup with Sia and Labrinth whose debut album has been streamed over three billion times. Furthermore, he is one half of Silk City with Mark Ronson, whose Platinum-certified “Electricity” with Dua Lipa topped charts worldwide and won a Grammy Award for Best Dance Recording.

Oluwatobiloba Daniel Anidugbe, professionally known as Kizz Daniel is a multi-award-winning Nigerian Afrobeats, Pop, R&B singer, and songwriter. Kizz Daniel is the epitome of an all-around entertainer with a magnetic tone, captivating lyrics, an alluring screen presence and undeniably engaging beats; the irrefutable characteristic of all his songs.

Founder of Fly Boy Inc record label, which launched operations in 2017, Kizz Daniel hails from Ogun state, where he completed his education, graduating with a degree in Water Resources Management and Agrometeorology in 2013.

Fresh out of university, Kizz Daniel made an immediate impact with the timeless hit song “Woju” in 2014, , which was named the Hottest Single at the Nigeria Entertainment Awards. In 2015, Kiss Daniel released a follow-up single, “Lave”, another sensational hit, on his birthday and two weeks later released the video, which was directed by AJE FILMS and shot in different locations, including the eastern part of Africa. The following year, Kizz released his first studio album, ”New Era”.

The talented artist has worked with other award-winning artistes such as Wizkid on the sensational song “For you” and Davido on the instant classic “One Ticket”, which trended within 24 hours of its release. In 2018, Kizz released his second studio album, “No Dad Songz” and featured acts such as South African sensation, Nasty C, Tanzanian hitmaker, Diamond Platnumz, and many others. The album “No Bad Songz” debuted at No. 55 on the US iTunes Chart and became No. 1 on the World Album Chart within 24 hours of its release.

Nora Fatehi is the most followed Arab artist in the world on Instagram with over 42 million Instagram followers, along with a collective 7+ billion views on YouTube. She became the first Arab African female artist to hit 1 billion on a single unit on YouTube with her hit song, “Dilbar”. Nora was born and raised in Toronto, Canada, by parents of Moroccan origin. She speaks English, Arabic (Moroccan dialect) and Hindi.

Nora moved to India to pursue her dream in acting and performing in Hindi cinema, debuting in the Hindi action film “Roar: Tigers of the Sunderbans”. She built a successful career through hit movies like Baahubali (with the song “Manohari”) and by dancing in the Indian reality show Jhalak Dikhhla Jaa 9.

She became an international star with her smash hit “Dilbar”, which was featured in Bollywood movie Satyamave Jayate. The song made her a star overnight as it broke all possible records on all streaming platforms. It was the first song ever to hit 20 million views in less than 24 hours.

She had made her singing debut back in 2018 when she sang and produced the Arabic-language version of “Dilbar” along with Moroccan band Fnaire, which gained her a huge Arab following.

Since then, she has received huge acclaim and positive reviews for her role in the movie Batia House, in which she played a small-town girl and also performed another dance number, “O Saki Saki”, another huge hit that racked up 20 million views in less than 24 hours. In 2020, she became a popular judge on India’s Best Dancer, one of the top shows in India, with her presence increasing the show’s ratings.

Trinidad Cardona is becoming one of pop’s great chameleons. The prolific pop/R&B crooner was launched into the stratosphere following his 2017 smash “Jennifer,” shaking the rafters with a refreshing combo of soulful vocal gymnastics and longing bars about first love and heartbreak. In 2018 he released “Dinero,” a sexy ode to toxic romances that would become a social media sensation nearly two years later with its Miami-flavoured rumba horns and driving beat. What comes next proves that Cardona’s musical voraciousness is reflected across every release, never following the expected path while still delivering lyrical gut punches at every turn.

In early 2022, Cardona signed to Def Jam Recordings and released the incandescent single “Love Me Back,” a soaring torch song melding hypnotic Afrobeats percussion and shimmering synths. He also appears on the FIFA World Cup Qatar 2022 soundtrack with “Hayya Hayya (Better Together),” a rousing reggae-meets-EDM anthem calling for global unity and featuring singers DaVido and Aisha. Now, with an album on the horizon, influences from R&B, dancehall, and corridos swirl into songs that capture the richness of the world around him, as well as the one he’s forged within.

Calvin Harris is a producer, DJ and songwriter with more than 35 billion streams across audio and video, five Grammy nominations, and is viewed as the figurehead for modern dance music.

Calvin has collaborated with global artists including Frank Ocean, Pharrell Williams, Rihanna, The Weeknd, and Travis Scott to name a few. His work has garnered a number of top music awards and nominations, including 14 MTV VMA nominations and 2 wins, 5 Grammy nominations and a 2013 Grammy Award win in the Best Music Video category for “We Found Love”.

These performances are an extension of FIFA Sound , an entertainment strategy introduced by FIFA in 2021 that brings together two of the world’s biggest passions – football and music – to create more innovative and meaningful connections between football fans, music enthusiasts, players, artists, and the game they all love. By spearheading initiatives that establish meaningful connections between these two universal languages, FIFA Sound creates unique experiences that are driven by shared passions.

Since its inception, FIFA Sound has launched a new podcast series ( PlayOn ) as well as collaborations with some of the biggest players in music to redefine football’s place in popular culture, while inspiring a new generation of fans and growing the game for years to come.

For more information about the FIFA Fan Festivals, in Doha and beyond, visit FIFA+ .

Qatar will also host a vast array of cultural and entertainment options during this year’s FIFA World Cup, with more than 90 special events set to take place on the sidelines of the tournament. Doha Corniche will be one of the largest fan destinations, with roving performances, cultural activities, food and beverage stalls, and retail outlets along its 6km route, with capacity to host 70,000+ fans every day.

Other activities will include the daily “Welcome to Qatar” show, one of the biggest water and pyrotechnics shows in the world that will feature music from the Qatar 2022 Official Soundtrack, Qatari composer Wael Binali and the Qatar Philharmonic Orchestra. Theme-park rides and other attractions at Al Maha Island Lusail will also be open to fans, as will the Ras Abou Aboud 974 Beach Club, the Hayya Fan Zone on the Lusail South Promenade, and the Arcadia Spectacular and ARAVIA by MDL Beast dance music festivals. The Last-Mile Cultural Activations will also feature more than 6,000 performances in 21 locations, offering entertainment for those on their way to the stadiums.