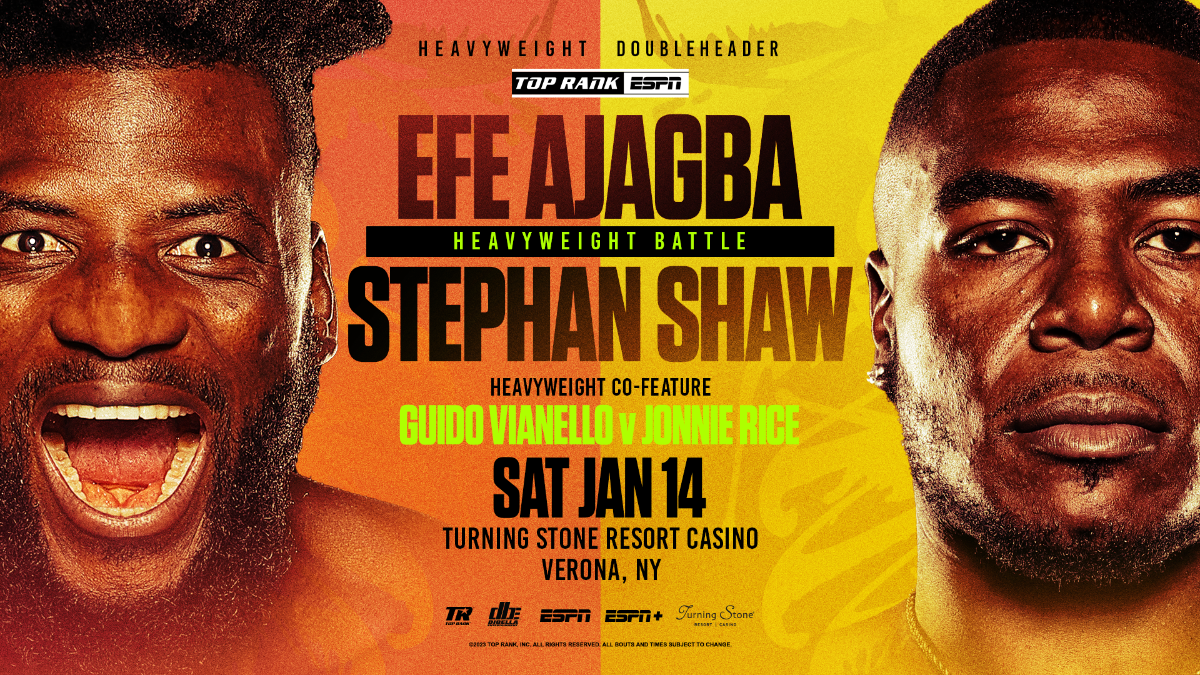 The matchups have changed, but a high-octane heavyweight doubleheader will still go down Saturday, Jan. 14, at Turning Stone Resort Casino in Verona, New York.

In the 10-round main event, Efe “The Silent Roller” Ajagba will now take on St. Louis native Stephan “Big Shot” Shaw. Oscar Rivas was originally slated to fight Ajagba but had to withdraw with an eye injury.

Guido “The Gladiator” Vianello, who was scheduled to fight Shaw in the co-feature, will now face the upset-minded Jonnie Rice in a 10-rounder.

Ajagba-Shaw and Vianello-Rice will be broadcast live on ESPN, ESPN Deportes and ESPN+ at 10 p.m. ET/7 p.m. PT. Undercard bouts will stream live and exclusively on ESPN+ and includes a 10-round junior lightweight tilt between Adam “BluNose” Lopez and Abraham “El Super” Nova.

“Stephan Shaw stepped up and has a tough task against one of the division’s biggest punchers in Efe Ajagba,” said Top Rank chairman Bob Arum. “We’re pleased that Guido will remain on the card against a formidable opponent in ­Jonnie Rice. This will be a fantastic heavyweight doubleheader at Turning Stone.”

Shaw (18-0, 13 KOs) went 3-0 with two stoppages in 2022, including a shutout eight-round decision over Rydell Booker in November. Ajagba (16-1, 13 KOs) is one of the heavyweight division’s hardest punchers and is coming off a second-round stoppage over Jozsef Darmos in August.

Vianello (10-0-1, 9 KOs), a 2016 Italian Olympian from Rome, has won three fights since a 2020 draw to Kingsley Ibeh. Rice (15-6-1, 10 KOs) has faced a host of heavyweight hopefuls, including Ajagba and Shaw. Following back-to-back losses in 2020, Rice re-energized his career with a fifth-round TKO over then-unbeaten prospect Michael Coffie in July 2021. He repeated the deed on New Year’s Day, outlasting Coffie via a 10-round unanimous decision.

Promoted by Top Rank, in association with DiBella Entertainment, tickets priced from $49 to $89 are on sale now and can be purchased at the Turning Stone Resort Casino Box Office, charge by phone by calling 800.771.7711 or online at Ticketmaster.com.