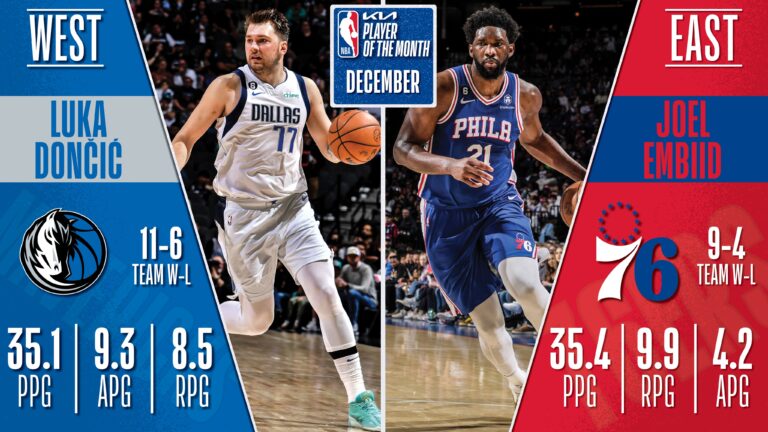 Check out their highlights from the past month.

Doncic, who earns the honor for the third time in his career, averaged 35.1 points (51.9 FG%, 42.4 3FG%), 8.5 rebounds, 9.3 assists, 1.6 steals and 36.3 minutes in 15 games in December. It marked the highest-scoring month in franchise history (min. 10 games played) and the Mavericks went 11-4 in his 15 appearances during the month (11-6 overall). The reigning two-time Western Conference Player of the Week scored 30-plus points in 12 of his 15 games in December, including 50-plus points on three occasions. Doncic also notched three of his eight triple-doubles during the month.

This represents Embiid’s fifth career Player of the Month award, breaking a tie with Hall of Famer Allen Iverson for the most such honors in 76ers franchise history. Embiid led the 76ers to a 9-4 record (.692) in the month, including a season-long eight-game win streak from Dec. 9-25. Philadelphia’s .692 winning percentage ranked third in the NBA throughout the month. Embiid earns the honor after leading all NBA players in scoring at 35.4 points per contest on 54.5% shooting from the floor and 41.7% from 3-point range.