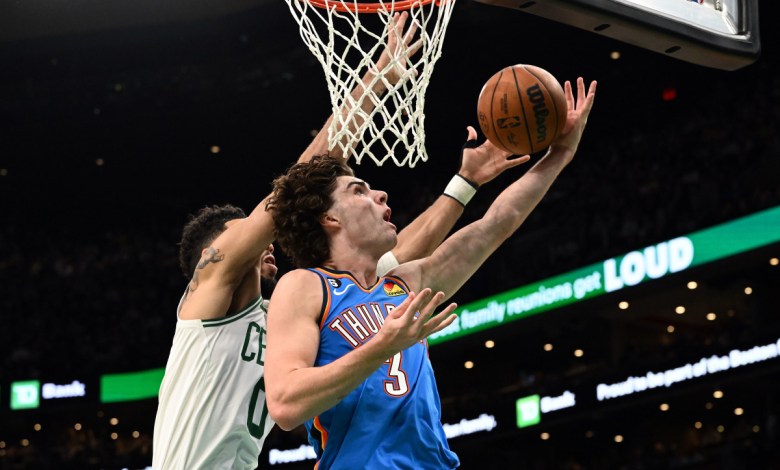 The Oklahoma City Thunder, without Shai Gilgeous-Alexander, Aleksej Pokusevski and Jeremiah Robinson-Earl, met the number one in the Eastern Conference – the Boston Celtics – on Tuesday night. Being shorthanded wasn’t a problem, however, as seven Thunder players scored in double figures to oust the Celtics, 150-117.

Despite Gilgeous-Alexander being unavailable, the Thunder started the first frame on the right foot, passing bucket after bucket to the Celtics and forcing a 13-13 tie midway through the quarter. They would go on with a 16-4 run that included some hot shots and defensive play from the Thunder’s guard rotation, and Oklahoma City would lead 29-20 with minutes to go.

But Boston’s Malcolm Brogdon would respond with a 3-pointer, sparking a 7-0 run for Boston to reduce the lead to two. Mann was quick to respond with a step back 3 pointer of his own to try and maintain the Thunder’s lead, but Jayson Tatum took over the Celtics’ offense and helped his team lead. A timely cut from Darius Bazley would result in a thunderous dunk to lead Oklahoma City 34-33 into the second quarter.

Wiggins led for Oklahoma City in just his seventh start of the season, recording eight points with four shots, while Giddey and Dort combined for 13 points and two steals before sitting down.

Joe fired in the second frame, quickly scoring six points, leading Oklahoma City’s offensive attack and starting an 11-2 run to set the tone for the rest of the quarter. That energy would carry the thunder through the rest of the frame as Dort, Mann and Kenrich Williams all managed to find a way to score before an easy layup from Jalen Williams would take their lead to 15 points in just minutes.

However, Joe wasn’t done yet. Towards the end of the quarter, Joe would drill two more deep 3-pointers while Jalen Williams would drill a middle-range jumper to give Oklahoma City a 22-point lead with just over a minute left. The Thunder would go into halftime with a 74-54 cushion over Boston.

Oklahoma City’s momentum showed no sign of slowing down to get things moving in the third quarter, quickly scoring 16 points to forge a 90-67 lead as Boston seemed uninterested in protecting the rim . They would eventually extend their lead, giving them a 122-91 lead over the Celtics going into the final frame. The Celtics couldn’t stop Josh Giddey, who had 15 points, including three 3-pointers, in the quarter to give him 25 points that night.

The fourth quarter started with several Thunder players making highlight plays. Williams started with his second monstrous dunk of the night after a seam opened up and Joe blew past Blake Griffin to explode all over Payton Pritchard, giving him an and-1 chance. He would miss the free throw but get his own putback.

Mann also continued his hot streak, nailing a contested 3-pointer out of the glass to give the Thunder their 131st point of the game. Even Jaylin Williams, who hasn’t received a lot of playing time this season, has put down a three-pointer.

And midway through the fourth quarter, the Thunder were up 137-105. It was all downhill from there as the Thunder’s huge lead became insurmountable. They would finish the game after reaching the 150 point mark to defeat the Eastern Conference top team.

The Oklahoma City Thunder will have little chance to rest as they fly into Orlando at 6:00 p.m. CST on Wednesday night to face the Magic at the Amway Center.