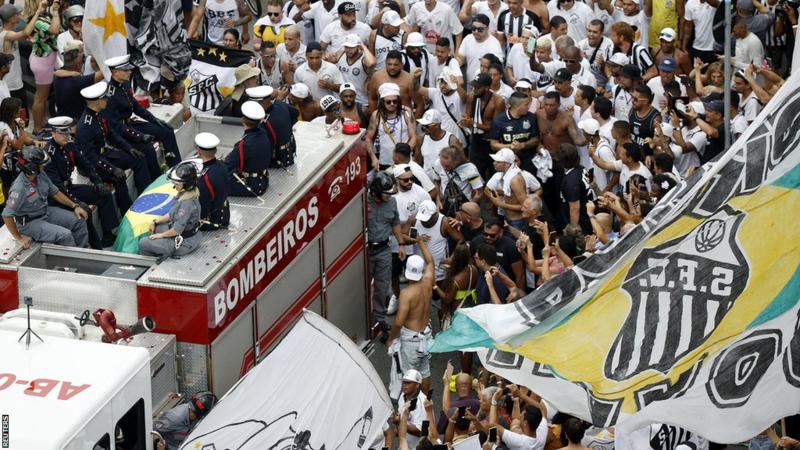 Thousands of mourners lined the streets as Brazilian football icon Pele was laid to rest in Santos, the city of his former club.

Pele had been lying in state for 24 hours in the centre of the pitch at the club’s Urbano Caldeira stadium for the public to pay their respects.

People crowded the streets on Tuesday as his coffin was carried on a fire truck to a private family funeral.

Arguably the world’s greatest ever footballer, he had been receiving treatment for colon cancer since 2021.

Covered with a Brazilian flag, Pele’s coffin was carried on a fire truck through the packed roads of fans.

The procession also passed by the house where his 100-year-old mother, Celeste Arantes, still lives.

Santos FC said more than 230,000 people had attended his 24-hour wake in the Vila Belmiro stadium, where a steady stream of mourners continued through the night.

The funeral cortege ended at the port city’s Memorial Cemetery, where a Catholic funeral service was held before Pele is interred in a 10-storey mausoleum that holds the Guinness World Record as the tallest cemetery on earth.

‘He joined all of us’ – fans pay tribute

Pele’s coffin was paraded through Santos on a fire truck – as is the Brazilian tradition – while fans accompanied the cortege chanting “Pele, 1,000 goals”.

Hundreds of people waved huge banners and were wearing the number 10 shirt he made so famous.

This was a day of mourning for the man Brazilians call their King, but it was clearly a moment to celebrate him too.

There was joy and happiness on the streets that Pele was – and will always be – Brazil’s biggest source of pride.

Deofilo de Freitas was first in the queue at the stadium on Monday, but wanted another chance to see his idol before he was laid to rest.

“Pele was the Pele of the people, he joined all of us,” he said. “It’ll be hard to find someone else like him.

“In addition to being the best player in the world, he was a marvellous human being.”

Santos FC, where Pele spent the majority of his club career, tweeted: “Our eternal King Pele says goodbye in Vila Belmiro, his home, with his people.”