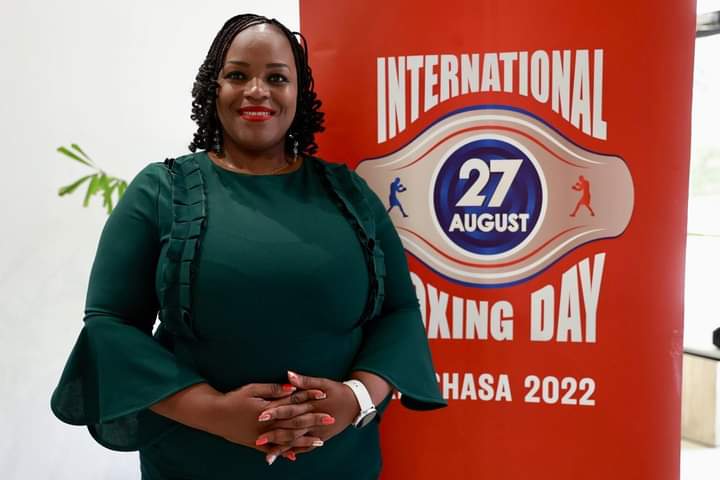 As the Eswatini Boxing Association President for 9 years, which is quite a unique achievement in itself. First elected in 2011, she was amongst the very few women National Federation Presidents who have led the sport of boxing in the entire world.

Meet Pearl Dlamini, an IBA Board of Directors member from Africa.

In addition to a long list of achievements other than “the only woman”, for instance, she was a Board Member of the African Boxing Confederation (AFBC), and AFBC Women Commission Chairperson. What is more, she is a director of the boxing club in her home country and a Board Member and former Vice President of the Eswatini National Olympic Committee. With all these important roles, it is even more impressive that she dedicates time to the mentoring of young women sports administrators within her community.

‘I’ve been involved in boxing since 1993 when I started as a Secretary General for a club. I did not box myself but came in as an administrator. I was trained as a local Referee & Judge (R&J) and then continued in an administrative position. My father created a New Boys’ Boxing Club and I took it over as a Director when he passed away,’ she remembers.

Pearl was competing against men for the position of President of the Eswatini Boxing Federation and celebrated a victory two times.

‘I was very humbled by the trust and confidence the Eswatini boxing family bestowed on me. Winning elections two times in a row was just something unique. I really felt honored and was proud to represent all women in boxing in the Presidential position. It really gave hope to all women in our sport that we can do a lot and excel. Boxing needs the female voice in the high positions, it needs someone who will ensure women’s issues are prioritized and advocated,’ she said.

She managed to introduce good governance practices within her National Federation, developing such important documents as a gender equality policy, finance policy, anti-harassment policy and others. Under her leadership, several Eswatini coaches were able to receive 1-Star and 2-Star IBA coaches’ certifications.

‘We raised two talented boxers, Thabiso Dlamini and Zweli Dlamini, they are unbeaten in Eswatini and were fortunate to have secured our top Boxers Olympic Scholarships that have shaped them,’ Pearl mentioned.

She is very good at planning and managing people, what is more, she is qualified in project management and able to deliver things within the scope, time and budget. With great communication skills, she created a strong team around herself and a strong network as well.

‘Yes, I have been opposed before but my personality helps me. I am not easily moved from principles I believe in, so my communication skills help me to always win people on my side.’ Pearl went on to say.

IBA BOARD OF DIRECTORS

Pearl was amongst many candidates for the position of IBA Board of Directors Member, while the Congress had to elect only 10.

‘I was excited about being nominated for the position of IBA Director. For me, making it to the nomination list was an achievement and a big win on its own. Being actually elected was so overwhelming.’

More than that, recalling 14 May 2022 when she was elected, she still has goosebumps. She was amongst the first two elected Directors based on the number of votes she received.

‘I still can hear them calling my name and inviting me to join the stage. For me, it came as a shock to know how many National Federations had confidence, trust, and ultimately voted for me. I came from a small country in Africa with 1.2 million inhabitants. Making it to the final list was such an achievement not only for myself but for the whole boxing community. Being the first African woman to serve on IBA Board of Directors was also just something special,’ she claimed.

‘Now I am a servant of the entire Boxing Family and I have to consider all needs of the entire community fairly and firmly. African boxing has a strong voice now in IBA. They call me the Queen of African Boxing, and I will ensure African boxing is fully represented and prioritized,’ Pearl said.

What is more, she will give priority to women in boxing. ‘It means I will be their eyes, ears and hands. They have a sister that will fight for their issues to be addressed as we now speak diversity in IBA across all areas.’

Pearl Dlamini has a clear vision of what should be improved within the organization and what has to be prioritized, and what is less important. At first, she mentioned boxing’s comeback to the Olympic Family, ensuring proper governance and financial stability and restoring the image of boxing.

‘We have to win back the confidence the public has in the IBA and from the observations since we were elected, we are on course as the public’s response to our programs has been amazing,’ she said.

According to Pearl Dlamini, there should be a clear inventory of the existing gaps in terms of education of officials across all continents and a clear roadmap to cover those gaps. Also, she mentioned boxing reform programs and athlete development programs for both genders.

Dlamini sees the way for the IBA to be reinstated within the Olympic movement. For that, the parties should be transparent with each other.

‘Let IOC put it to IBA what they expected to have been addressed by when and let IBA show progress on what has happened in addressing those areas,’ she stressed.

‘I have seen that major milestones have been reached in addressing most of the concerns raised. I also love that all IBA Board of Director Meetings have this as an agenda item to be discussed. This shows the commitment and willingness to close this and quickly get back Boxing to the Olympic family. One thing which gives hope is that the IBA Board wishes for the same thing as well, which is to take back boxing to the Olympics. It is a priority area for all of us. Let’s re-engage, agree on clear timelines on what should be delivered when, and how we will track progress,’ Pearl added.

In Eswatini, boxing development could move forward faster, admits Dlamini. The main reason is the lack of funding and Covid pandemic repercussions.

‘Eswatini Boxing Federation currently receives an annual allocation of around $10,000 USD to run the activities of our Federation. This is not enough to cover all our development programs.’

‘We have very few women boxers, as fear still exists within the community that boxing is a male-dominated sport. It waters down our efforts. For further development to happen, we need more funds and development programs for our officials. I am happy that within a Year of Africa, people were able to receive the necessary knowledge to officiate or be coaches.’

According to Pearl Dlamini, the agenda of women in boxing will improve. This can be done through marketing and communications initiatives, as well as mentor programs. Countries in need should receive equipment and take part in training camps with top athletes. All these could motivate more women to go in for boxing.

‘We do not have a lot of women involved in boxing in Africa. We still cannot attract and retain many women. They don’t apply for leadership positions in Africa because of lack of confidence, they are scared to face men’s opposition at elections. Governments hardly ever encourage women to run for positions.’

She believes that IBA leadership has been seen advocating for women in boxing initiatives. As a possible solution to get rid of women’s underrepresentation, she sees many options. To name a few, she proposes to create dedicated forums and women’s committees in each National Federation, as well as leadership programs for women.

‘Women have to exchange experiences, listen to other stories of success in order to pick up the lessons and achieve the same.’

Pearl Dlamini knows how to balance her private life and a career in boxing.

‘It is very possible to handle both successfully. It is all about planning ahead and ensuring your life is organized. I am a wife, a mother, a director at work, a daughter-in-law, a sports administrator and a lecturer, furthermore, I am a director in my own company. I’ve managed to pull through these roles without an issue. The major support structure has been my husband, family and my supervisor, so this helps in balancing my private life and involvement in boxing,’ she stressed.

She addressed all women in sports to empower them going forward with their careers.

‘It’s time you claimed back what belongs to you. Create networks and lobby for positions. Do away with the fear of standing up against men in elections. Make yourself, read, research and have your facts; that way you will be empowered and have nothing or no one to fear. Do not be afraid to make mistakes, that’s how we all grow. No one is perfect. Have the right attitudes and personal beliefs. “If one can do it, so can I”. Work on strengthening your communication skills. If you can, attend the woman in sports forums or leadership courses, as they will boost your confidence and beliefs. Have a circle of women in sports from all over the world with whom you network all the time. Share your experiences and get to learn from those of others. Let the work of your hands talk for themselves. Strong family support is crucial,’ Dlamini concluded.