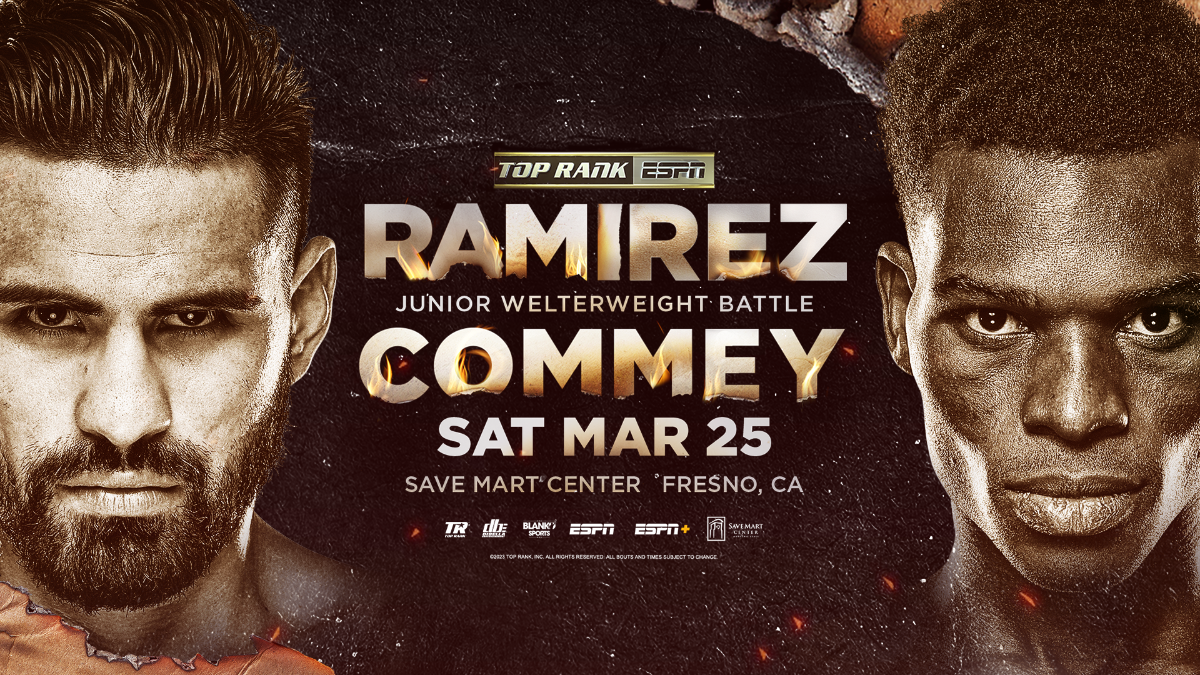 The fighting pride of California’s Central Valley and one of boxing’s pound-for-pound queens are joining forces for a special Fresno Fight Night.

Ramirez-Commey and Estrada-Rupprecht will be broadcast live on ESPN, ESPN Deportes and ESPN+ at 10 p.m. ET/7 p.m. PT.

Promoted by Top Rank, in association with DiBella Entertainment, tickets starting at $29 go on sale go on sale Friday, Jan. 13 at 10 a.m. PT and can be purchased at Ticketmaster.com and the Arena Box Office.

Ramirez (27-1, 17 KOs), from Avenal, California, returns home to the friendly confines of the Save Mart Center, which has hosted six of his previous fights. Following his 2021 decision defeat to Josh Taylor for the undisputed junior welterweight title, Ramirez rebounded last March with a unanimous decision victory over former two-weight world champion Jose Pedraza. He has been among the sport’s best 140-pounders since winning the WBC world title over Amir Imam in March 2018. After defending that title twice, Ramirez stopped Maurice Hooker in six brutal rounds to unify the WBC and WBO titles. Ramirez retained both belts with a hard-fought majority decision over Viktor Postol in August 2020, a win that set up the Taylor showdown.

“Fresno and the Save Mart Center hold a special place in my heart, and I am blessed to be able fight in front of my Central Valley fans once again,” Ramirez said. “Richard Commey is a championship fighter with everything to gain. I expect the best version of Commey on March 25. My goal is to become champion again, and I am more motivated than ever to prove that I am the best junior welterweight in the world.”

“Ramirez is motivated like I have never seen, and he’s out to prove some things,” said Rick Mirigian, Ramirez’s manager. “It all starts in Fresno in front of 15,000 hometown fans.”

Commey (30-4-1, 27 KOs), from Accra, Ghana, made his name as one of the sport’s top lightweights, winning Commonwealth honors before capturing the IBF world title in February 2019. His title reign lasted 10 months, as he knocked out former world champion Ray Beltran before a stunning second-round stoppage defeat to Teofimo Lopez at Madison Square Garden. Commey’s lightweight run ended with a December 2021 decision loss to Vasiliy Lomachenko. Last August, in his junior welterweight debut, he fought to a 10-round draw against Pedraza.

Commey said, “I want to thank my team for putting me on the path to fulfilling my dream of becoming a two-weight world champion. I also want to thank Bob Arum and Top Rank for once again showing faith in me by allowing me to headline against a formidable opponent in Jose Ramirez. I’m up for the challenge, and I intend to make Ghana and all my fans around the world proud.”

Estrada (23-0, 9 KOs), from East Los Angeles, California, returns to her home state intent on unifying world titles for the first time in her decorated career. The 30-year-old veteran turned pro nearly a dozen years ago and has competed at the world class level in three weight classes. In 2021, she captured the WBA minimumweight and WBO light flyweight titles in consecutive fights. Estrada then vacated the light flyweight title to pursue undisputed glory at minimumweight. She signed with Top Rank last year and returned from a nearly 11-month layoff in November to shut out Jazmin Gala Villarino.

“I want to give Tina credit for being a world champion who isn’t afraid of a unification fight, unlike Yokasta Valle,” Estrada said. “Since we couldn’t get Yokasta into the ring, we decided to do one better and fight the woman who beat her. The Fresno fans are passionate, and they are in for a great show.”

Rupprecht (12-0-1, 3 KOs), from Augsburg, Germany, has made five defenses of her world title after being elevated from interim champion in 2018. Earlier that year, she toppled Valle, who is the current IBF and WBO unified minimumweight world champion In July 2021, Rupprecht edged former world champion Katia Gutierrez by split decision. Following more than a year away from the ring, she shook off the ring rust to dominate Peruvian veteran Rocio Gaspar to set up the Estrada showdown. Rupprecht has fought all but one of her pro bouts in Germany and will make the nearly 6,000-mile journey in hopes of ruining Estrada’s undisputed goal.

“To fight in America against a fellow world champion in a world title unification is a dream come true for me,” Rupprecht said. “Seniesa is considered one of the sport’s best fighters, and I look forward to seeing who is the true number one in the division. This will be a Fight of the Year candidate and another huge night for female boxing. I’m going to be victorious and return to Germany with two world title belts.”

The undercard, streaming live and exclusively on ESPN+, is scheduled to include the following standouts:

Lightweight contender Raymond “Danger” Muratalla (16-0, 13 KOs), from Fontana, California, and trained by Robert Garcia, makes his 2023 debut in a 10-rounder. Muratalla went 3-0 in 2022, including stoppage victories over veterans Jeremy Hill and Miguel Contreras.

Rising lightweight Karlos Balderas (14-1, 12 KOs), a 2016 U.S. Olympian from Santa Maria, California, looks to author his sixth consecutive victory in an eight-rounder. Balderas is coming off a career-best showing over Esteban Sanchez, a methodical beatdown that resulted in an eighth-round TKO.

Javier “Milwaukee Made” Martinez (8-0, 2 KOs), who trains with Ramirez at Robert Garcia Boxing Academy, will fight an opponent to be named in a six-round middleweight tilt.

Flyweight prospect Jessie James Guerrero (3-0-1, 3 KOs), from Gilroy, California, will see action in a four-rounder in his U.S. debut.