LeBron James set a halfhearted screen on the left elbow before popping to the top of the key where Russell Westbrook found him with a pass. James caught it and squared up without hesitation, effortlessly flipping the ball toward the hoop during the first quarter Sunday night against the Philadelphia 76ers.

As it passed through the net, James became the second player in NBA history to score 38,000 career points. The player he’s chasing, Kareem Abdul-Jabbar, is the other member of the club.

After the next timeout, when James’ milestone basket was shown on the Crypto.com Arena scoreboard, public address announcer Lawrence Tanter called it another great moment in Lakers history.

But these moments in James’ tenure with the Lakers hardly have been great as far as team success is concerned. When he passed Michael Jordan on the all-time scoring list in Los Angeles, the Lakers lost. When he moved past Kobe Bryant, the team lost in Philadelphia, and when he became the second all-time leading scorer in Washington, that also came in a loss.

And by the time the horn sounded and 76ers star Joel Embiid fired the ball into the air, points 38,000 and 38,001 couldn’t truly be celebrated, another loss marring one of James’ milestone achievements.

“It sucks to lose a close game like this,” coach Darvin Ham said.

It’s unfortunate, but he was grabbing my wrist. I couldn’t get the ball up. But it’s all good.” 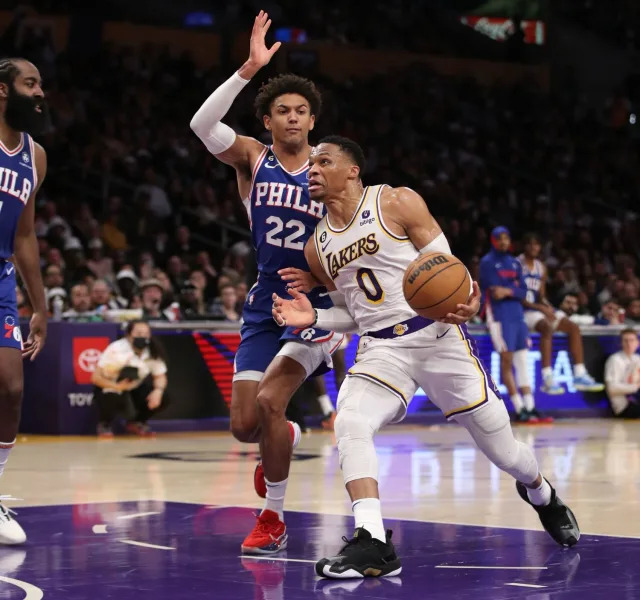 James was terrific all game, a 360-degree spinning layup in the second half yet another reminder that he’s aging in a way few have in any sport.

“I thought ‘Bron was phenomenal, really playing downhill, playing the right way,” Ham said. “Running, off the ball, really finding guys as well. I thought he was really, really good.”

But James didn’t touch the ball on the last possession.

“Down one, you’ve got one of our best playmakers to the rim, one of our best finishers at the rim, has the ball with Embiid standing in front of him. I’ll take that scenario every day of the week and twice on Sunday,” Ham said. “We just got to finish the play. That’s it. Make a harder, stronger move to the rim. That’s it. It’s as simple as that. And it just didn’t work out.”

He scored 35 points to go with 10 assists and eight rebounds. And Westbrook had 20 points, 14 rebounds and 11 assists — his fourth triple-double this season since moving to the bench, the most for an NBA reserve.

But for all the fight and excellence from the top of the Lakers’ roster, they left the court losers for the third straight time, Embiid’s silky midrange game in the fourth quarter the difference. 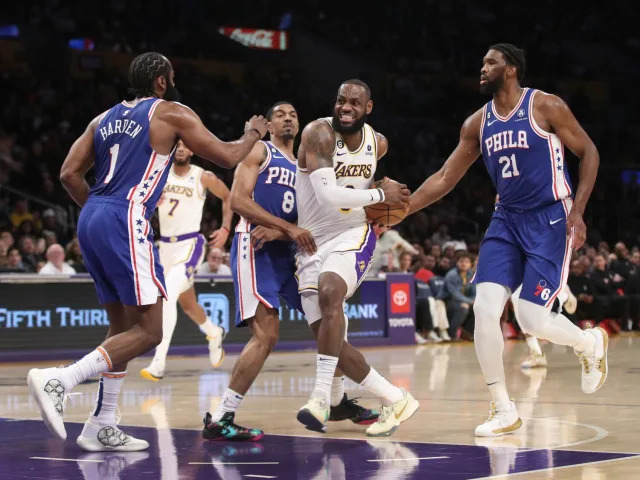 A Troy Brown Jr. three-pointer and a Lakers stop gave them a chance to win, but Ham didn’t call a timeout as Westbrook moved the ball up the left wing. With Embiid guarding him, Westbrook fumbled the ball before driving to the rim and ending the game sitting underneath the basket in frustration.

Ham said he didn’t consider calling a timeout, saying the ball was in the hands of one of the team’s best playmakers.

Embiid finished with 35 points and 11 rebounds, and James Harden had 24 points and 13 assists.

As James gets closer to breaking Abdul-Jabbar’s record, his honesty about the Lakers’ losing also has become more obvious.

The Lakers, though, aren’t exactly playing “losing basketball” despite their recent losses. They fell to Dallas in double overtime after questionable non-calls at the end of regulation and the first overtime.

And Sunday night against the 76ers, the team certainly had chances, including one with the game on the line.

Afterward, Ham reiterated his confidence in Westbrook in that situation, down one with the ball and a center in front of him — the same way the coach would be comfortable with James in that situation.

After the game, Westbrook said his experience in the NBA has taught him that one empty possession — in this case the final one — counts as much as one at any other time.

“I know the game didn’t come down to the last shot,” he said.

The other problems — poor three-point shooting, a depleted rotation, Embiid’s dominance and Harden’s mastery — mattered too. So did the Lakers’ play, which still has Westbrook and his teammates convinced they are a good team.

The standings, though, will need to say the same sooner than later.