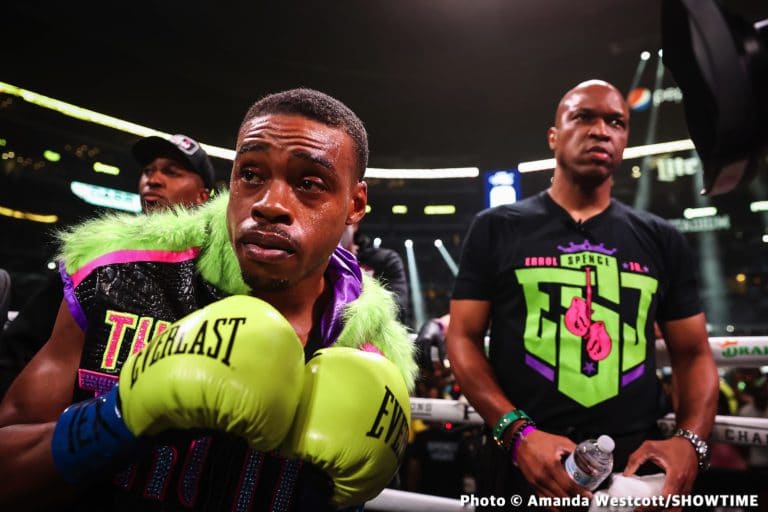 Tim Bradley fried the ‘Big Fish’ Errol Spence Jr today, skewering him for ‘running’ from Terence Crawford by fleeing to the 154-lb division to face Keith ‘One Time’ Thurman, with no intention of ever returning to the 147-lb weight class to face Bud and potentially get beat.

Bradley says Spence “lied” to the fans by making them believe that he wanted to fight Crawford when he had no serious intentions of ever sharing the ring with him.

“Errol Spence is running from Crawford. He’s running like a son of  a gun. He’s getting the hell out dodge out of the way,” said Tim Bradley to Fight Hub TV about his belief that Errol Spence Jr is running from Terence Crawford by going up to 154 to fight Keith Thurman.

“You straight up lied, and now you’re going to get caught up for it. Not just by me but by the fans as well because Crawford just fought, and now he’s going to come back and have a fight.

“How in the hell are you going to go up to 154 and then come back down to face Crawford? Isn’t one of your brothers that is in camp with you at 154 as well?

“We’ve been waiting on Crawford and Spence. All along, everybody has been saying it’s Top Rank’s fault. ‘Oh, Top Rank, you signed with the wrong promoter,’ giving hell to Crawford.

“Crawford came up and said in an interview, saying, ‘I had the money for us. I had the money secured.’ Obviously, Al Haymon is in total control of Errol Spence.

“Crawford is his own boss, but he had the money to pay twenty million, and he [Spence] didn’t. He didn’t take it because he can’t move unless Al Haymon says, ‘Hey, boy, we ain’t doing that,’” said Bradley.