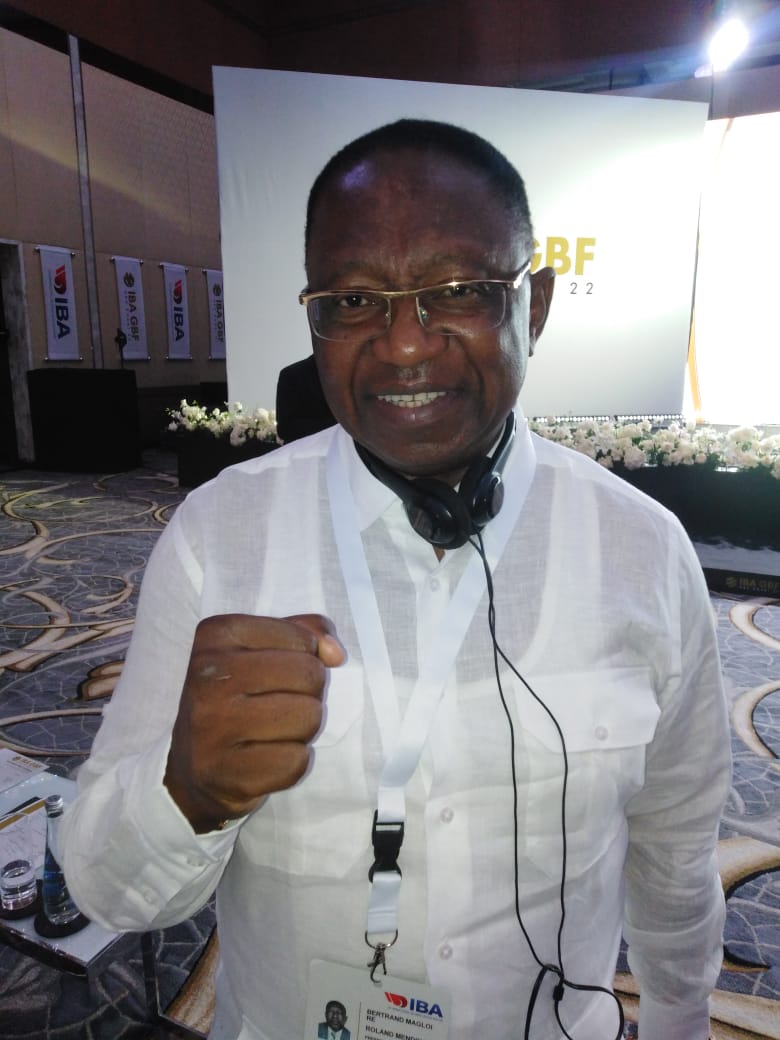 Africa Boxing Confederation (AFBC) President Bertrand Mendouga (pictured) has major plans to revolutionise boxing in the continent. In this first interview since being elected last July, Mendouga talks on a wide range of issues on Africa boxing.

*What is your plan and vision for Africa boxing?*

*Where do you plan to take Africa boxing in the next four years?*

My vision will be to promote the visibility and competitiveness of the African Boxing Confederation near other confederations and international boxing bodies.

*What do you think has been lacking in the management of boxing in Africa and how do you intend to rectify this?*

African boxing suffers from lack of funding, and to remedy this we will have to resort to
sponsorship

*If you were to look at your score sheet since being elected in July, what have you achieved in your goals to develop boxing in the continent?*

Within the framework of my objectives related to the development of boxing on the continent since my election on July 16th in Algiers four months ago, I’ve already organised three boards of directors, namely:

1. In Algiers on the evening of my election.
2. In Maputo and a congress held on the sidelines of the championship that I organized after my election in the Mozambican capital.

I have also organized training courses for the referees/judges 1 Star, 2 Star and 3 Star.
In addition, I distributed boxing equipment to 14 federations of Zone 4 in Maputo last November, and to 14 others, Zone 3 and 2 in Addis Ababa during the same month.
I was then a member of the IBA President’s retinue for the laying of foundation stone ceremonies for the construction of training centers in Rabat, Morocco and Kampala, Uganda.
We are also planning to open AFBC headquarters in Yaounde which will be launched by IBA President Umar Kremlev.
And for the first time in the history of the Africa Boxing Championships we had prize money at stake in Maputo last year. I consider this a major achievement in inspiring our boxers and taking care of their welfare. This will also improve our standards because the African tournament will now be more competitive with boxers fighting for prize money.

*What’s your major stumbling block towards achieving your goals?*

As I said earlier, the stumbling block for AFBC to achieve its objectives is funding.

*So what’s your game plan on funding?*

We must have recourse to sponsorship in order to
achieve our objectives. In order to do so, we have set up a Marketing Committee which will be in charge of bringing on board sponsors and networking with the corporate world to see which of their products can be marketed through AFBC and during our championships.

*Most African boxers I’ve interviewed would like to see more tournaments introduced to keep them busy and prepare for major international events.*

The AFBC through the Board has introduced the African Cup of Nations Elite Men and Women, restored the African Youth and Junior Women and Men Championships.
There’s also the official introduction of zones in our constitution, culminating not only in the regular organization of zonal championships, but a super zone championship that will take place every December in Kribi, the seaside town of Cameroon, and which will bring together all the champions, runners­-up and 3rd team of each zone, that is to say a total of 12 teams.

*Why do you think African boxers have not been doing well in major global tournaments like the Olympics and World Championships?*

The poor results of African boxers at the world level are related to the lack of continental competitions and constant exposure in major tournaments outside Africa.
For instance, the last African Championship in Maputo took place five years after the Brazzaville edition held in 2017.
That’s why we want to introduce many competitions to ensure our boxers are always in good shape and to improve on our standards.
I also call upon our national federations to enter their national teams in as many international tournaments as possible to improve on their standards.
The national federations should know that they too have an important role to play in the improvement of boxing standards in Africa. We must work as a team. Where AFBC can assist we will always do so but success will only be achieved through a concerted effort.

*Do you think those in charge of national federations are serious on improving boxing in Africa?*

The lack of confidence in the AFBC had for the last five years chilled the African national federations.
When I was elected, I said that I was the President of all Africa and not for one country, and I promised to work with everyone. Since then, serenity has returned to the ranks, and a certain enthusiasm and commitment is increasingly noticed within the federations. This renewed sense of vigour will spur each national federation to double up their efforts on improvement of Africa’s boxing standards.

To my knowledge, several African boxing federations have commissions for coaches and referees. Nevertheless, we will work for the harmonization of the statutes of these federations with that of the AFBC.

*Lack of such commissions, for instance, gives leeway to some federations’ executive choosing coaches of their choice instead of letting the coaches commission to select coaches for the national team. This has at times led to mediocre performance among some national teams to the detriment of boxing development in Africa.*

In this context, in some countries like Cameroon, the appointment of national boxing coaches is devolved to the Minister in charge of sports, on the proposal of the President of the federation. In my opinion, it would be difficult for a commission to easily appoint one of their own as national coach.

*What plans do you have on organising courses for coaches and R/J. Africa needs more 1 Star to 3 Star R/Js. This will enable them officiate in major tournaments.*

We have taken the commitment since July 16 in Algiers to organize courses for coaches, referees-judges, evaluators, ITO’s, technical delegates, scoring machine operators and ring doctors on the sidelines of each competition that will be organized in Africa including zonal championships.

*Any plans of a gala dinner to recognize and reward Africa’s boxing icons who’ve largely been ignored by past regimes of AFBC?*

At the Board of Directors meeting held in Maputo last September, the Board members made a commitment to honor former African boxing players heroes and heroines including former leaders of boxing in Africa at the highest level.

To organise such a function effectively requires proper funding, so once we’re okay financially we will start honoring our celebrated boxers and officials.

*What’s your position on AFBC working in concert with those in professional boxing?*

In this respect, it would be desirable that the IBA authorizes the creation of a professional boxing commission within the confederations

*Do you intend to defend your position in the next AFBC elections to ensure you do two terms in office?*

At this time, my biggest concern is to rebuild and restructure AFBC for future generations, for the rest we know that all power comes from God.