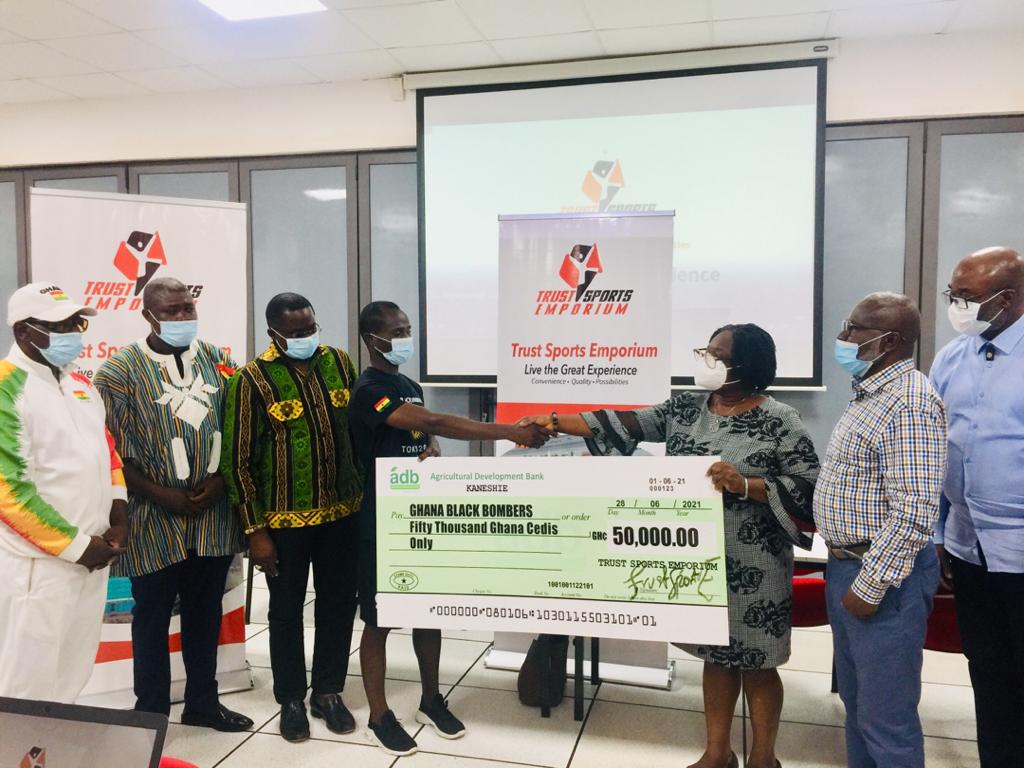 The Trust Sports Emporium Limited (TSEL), owners of the Bukom Boxing Arena on Monday made a huge donation as Sponsorship Package to the national boxing team, Black Bombers as preparations for the Tokyo 2020 Olympic Games comes into focus.

Barely few days before the three qualified boxers and technical team head out to Japan for the Games, a cheque of GH¢50,000 (fifty thousand Ghana Cedis) was presented by the Board Chairperson of TSEL, Mrs. Joyce Wereko-Ampim Opoku to the team at a short ceremony inside the amiable Mudor Conference Centre of the Bukom Boxing Arena.

“The Trust Sports Emporium has a mission which is to develop and support world class athletes through using our facilities within a professionally managed environment, which also delivers a great experience and benefit to other user fans and community. This is the agenda and since its establishment in 2016, we have consistently offered our facilities for use by up and coming men and women,” said Mrs Wereko-Ampim Opoku after her presentation.

“The world class facilities include Bukom International Pool, Gamashie Hall, Bukom Fitnesses and Physio, Bukom Boxing Arena as well as Mudor Conference which have all hosted local and international events since the Trust Sports Emporium was established and we look forward to more successes in the futture,” The TSEL Board Chair added.

Also in attendance was Kwabena Amponsah Dapaah, Managing Director of the TSEL and he said he hoped this corporate social responsibilty effort by the Trust Sports Emporium shall together with other forms of support energise the Ghana Black Bombers to win laurels for Ghana.

Sulemanu Tetteh, captain Black Bombers, who received the cheque on behalf of the team which’s other members are featherweight Samuel Takyi and light heavyweight Shakur Samed, thanked TSEL for their endless support since day one including allowing them to train inside their plush facilities and assured them and everyone who has supported the team in any way that the team will not let them down at the Olympic Games.

Mr. Nunoo-Mensah also expressed aprreciation for the good efforts of others such as Nii Okai Nunoo and the Black Bombers technical team led by Coach Ofori Asare and his assistant, Vincent Akai Nettey as well as Ghana Boxing Federation (GBF) Vice-President, Abdul Samadu Mohammed and every other coach involved in preparing the Black Bombers for Tokyo 2020.

GBF President, George Lamptey expressed gratitude to TSEL by presenting a citation to them for a marvelous work done and promised that the team will make them and Ghana proud in Japan.