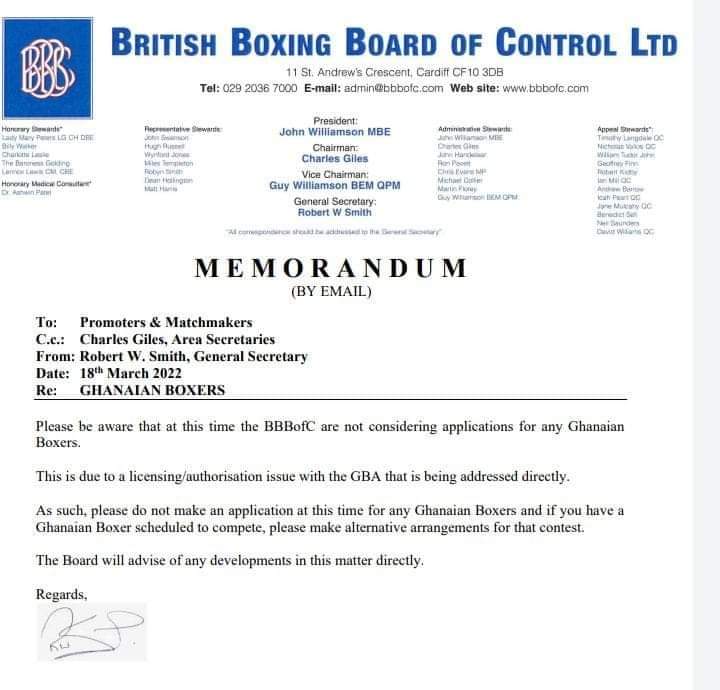 The British Boxing Board of Control (BBBofC) issued a memo today stating that they are “not considering applications for any Ghanaian boxers.”

This means boxers from Ghana will not be allowed to participate in British boxing events. According to the organisation which oversees boxing in the UK, their decision is due to a licensing/authorization issue with the Ghana Boxing Authority (GBA).

Although the GBA hasn’t responded, sources tell BoxingAfrica.com that the matter stems from the actions of a top Ghana boxing official. According to these sources, this official took a Ghana boxer to the UK using the name of another Ghanaian boxer.

However, suspicions were raised when the BBBofC realized that the boxer whose name had been used had just fought recently. Once they investigated the matter, they realized that the Ghanaian official had committed identity fraud. They have subsequently banned all Ghanaian boxers from participating in British boxing events.

Further sources have informed BoxingAfrica.com that this issue could lead to Boxrec.com, the official statistical bookkeeper for the sport of boxing, to ban Ghana once again.

This wouldn’t be the first time Boxrec has refused to recognize bouts staged in Ghana. Due to the actions of the GBA in the past, Boxrec considers it one of the most corrupt boxing organizations in the world.