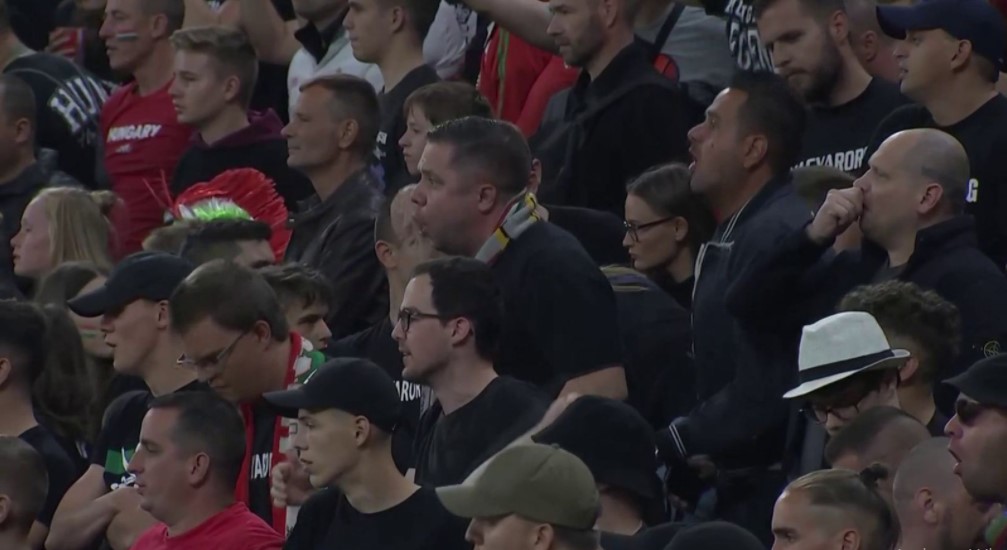 England players were subjected to incidents of overt racism from some Hungary fans during their 4-0 World Cup qualifying win in Budapest.

A minority of home fans were spotted aiming monkey chants towards Raheem Sterling after the forward put England in front during the second half in the Puskas Arena.

Sporadic monkey chants were heard from various areas of the Hungary crowd which were mainly directed at Sterling, who also played the pivotal pass for Harry Kane to put England 2-0 up.

Four separate individuals were seen specifically involved in racist chanting, with the abuse also directed towards Jude Bellingham as he warmed up on the sideline near to a section of Hungary supporters.

Gareth Southgate’s squad were booed as they took a knee prior to kick-off.

With the game played under FIFA jurisdiction, a full-capacity crowd of 60,000 were present at the Puskas Arena, despite Hungary having been ordered to play their next three UEFA competition matches behind closed doors – with one of those games suspended for two years – following racist abuse from supporters and homophobic banners in the stands during their Euro 2020 group stage matches in Budapest.

Hungarian FA President Sandor Csanyi had called on fans to not make any racist, homophobic or discriminatory chants in his match programme notes.

Hungary’s Italian coach, Marco Rossi, said before the qualifier that he would be “on the side” of England’s players if they were to be subjected to racist abuse in Thursday’s match.